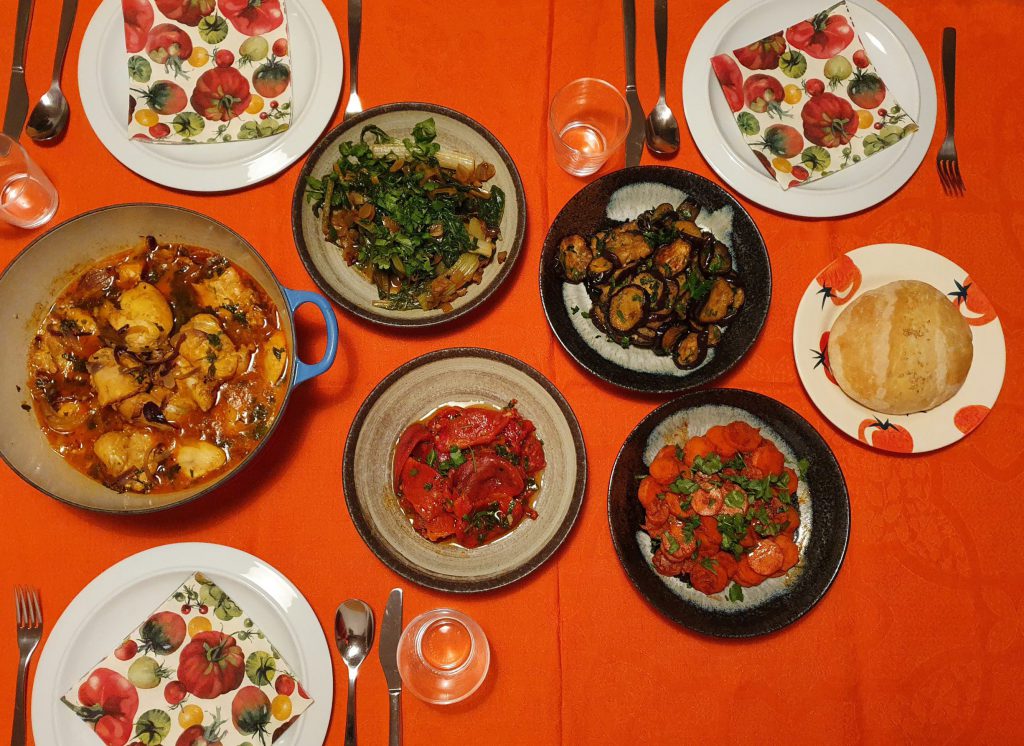 Do you know why the British are such keen travellers? When people from other lands think of England, they imagine lush fields full of skipping lambs, or lavish cream teas served on fine bone china, or HRH the Queen waving personally to them from the balcony of Buckingham Palace.

This is the reality 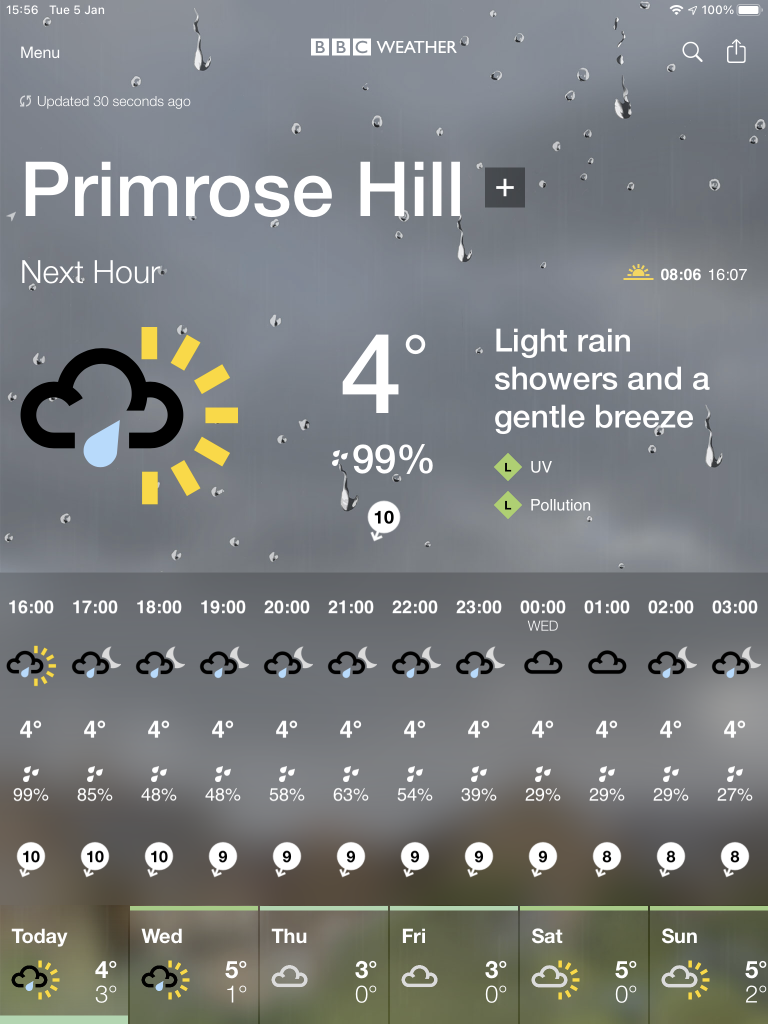 On top of a national lockdown for much of 2020, we have had so much rain that I found myself saying: I am tired of this. Normally I am quite cheerful about most things.

From news reports here are some statements:

The UK had its wettest day on record after Storm Alex hit earlier this month, with enough rain falling to more than fill Loch Ness, the Met Office has said. Data from the national weather service shows Saturday 3 October, the day after the storm, was the wettest day in records dating back to 1891.

UK weather geeks will delight in data and statistics from the Met Office.

This week I watched a travel and food programme on Marrakesh which brought back memories of eating some very delicious meals. I often cook Moroccan food when there is a crowd to feed, because the ingredients are not difficult to source and there is enough variety to please most people. I still only possess the one Moroccan cookbook, written by Paula Wolfert.

Now, you know what I am about to say. We are in another lockdown and travelling is still banned. Instead, I decided to make some of my favourite dishes based on recipes from Ms Wolfert’s book. It took two days to cook all the dishes as I had other things to do, but the results were very satisfying and there was enough for two dinners. We also added the last three pieces of chicken to our Minestrone Soup for lunch today.

The recipes are not exactly as in the book because we all have our own take on flavours and quantities. My simple recipes follow each photo. 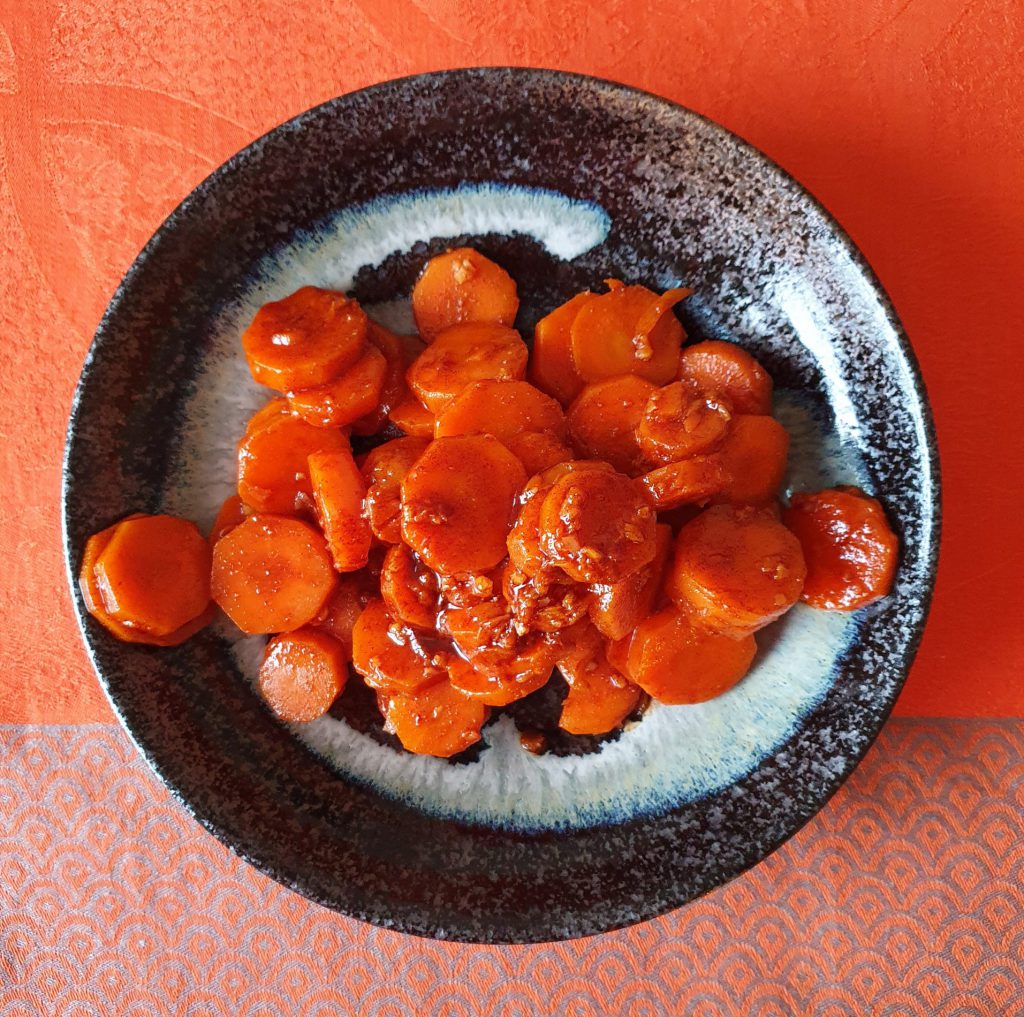 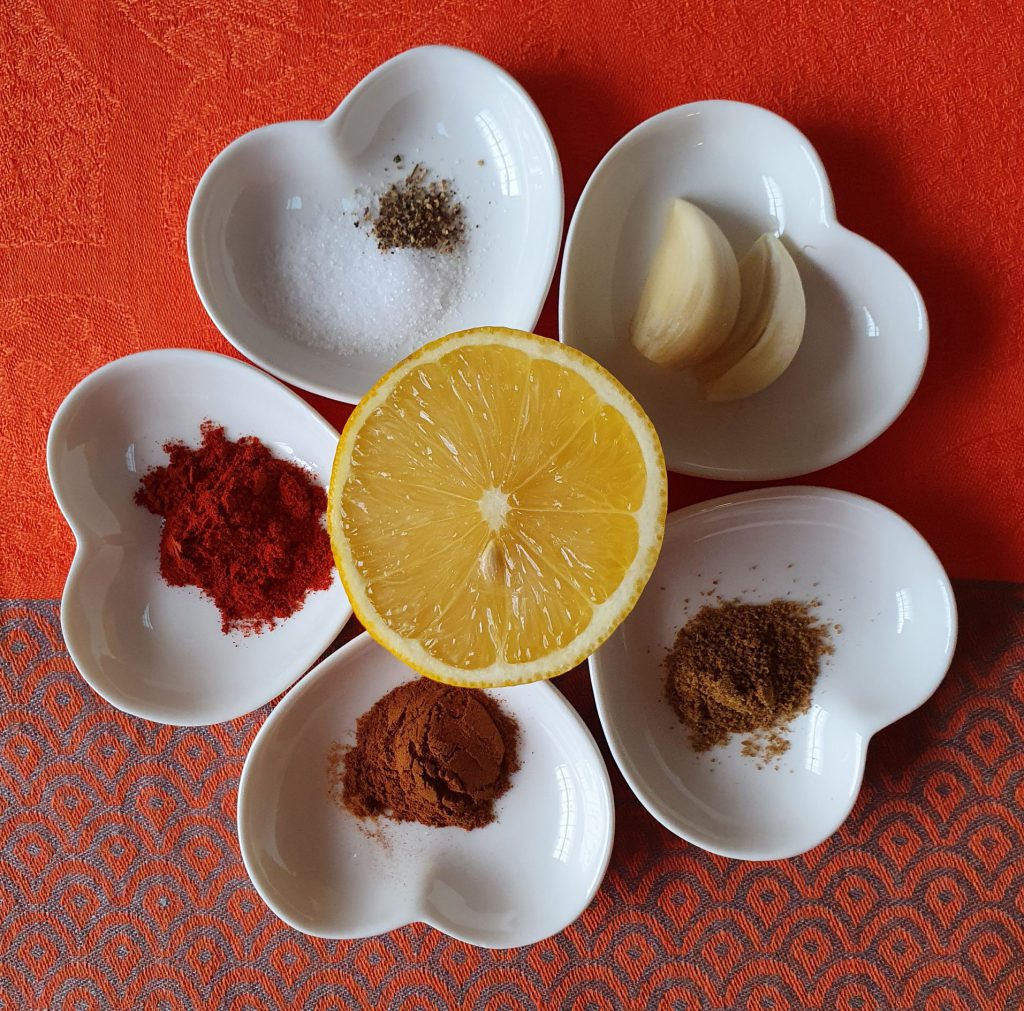 Peel and trim 450 g carrots. Steam whole for 20 – 25 minutes, until they are soft enough to slice through.

Whilst the carrots are cooking make the dressing in a large bowl:

When the carrots ready, slice them straight into the bowl and mix whilst still hot into the dressing. Sprinkle on some chopped fresh coriander before serving at room temperature.

Chicken with Olives and Preserved Lemons 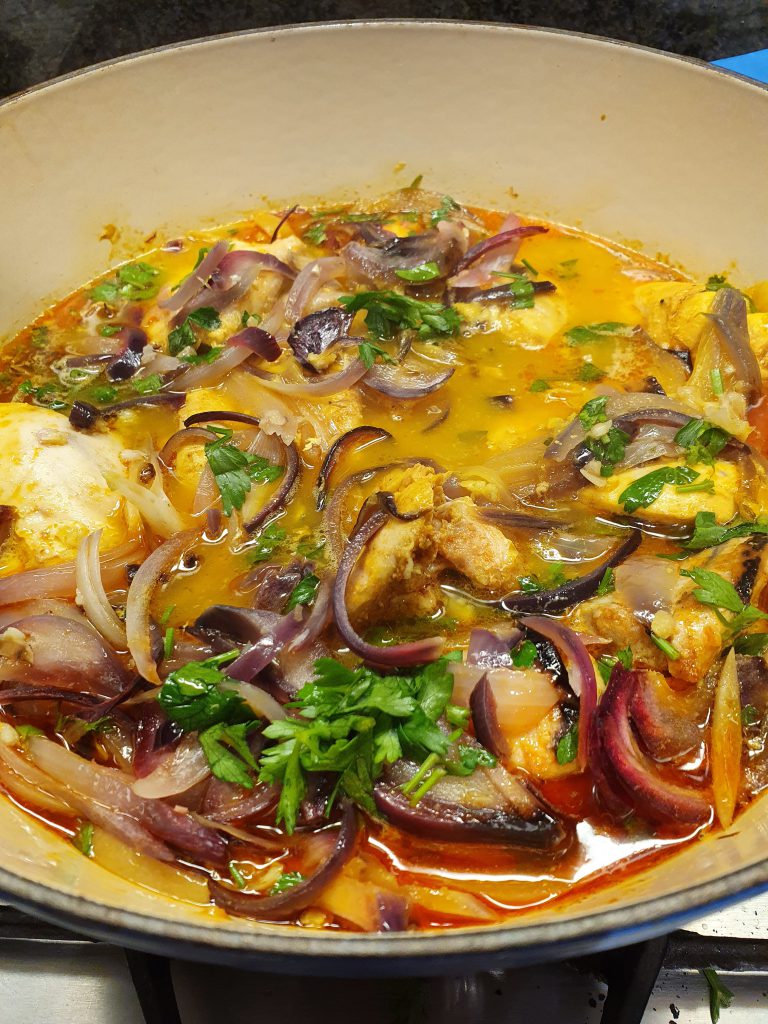 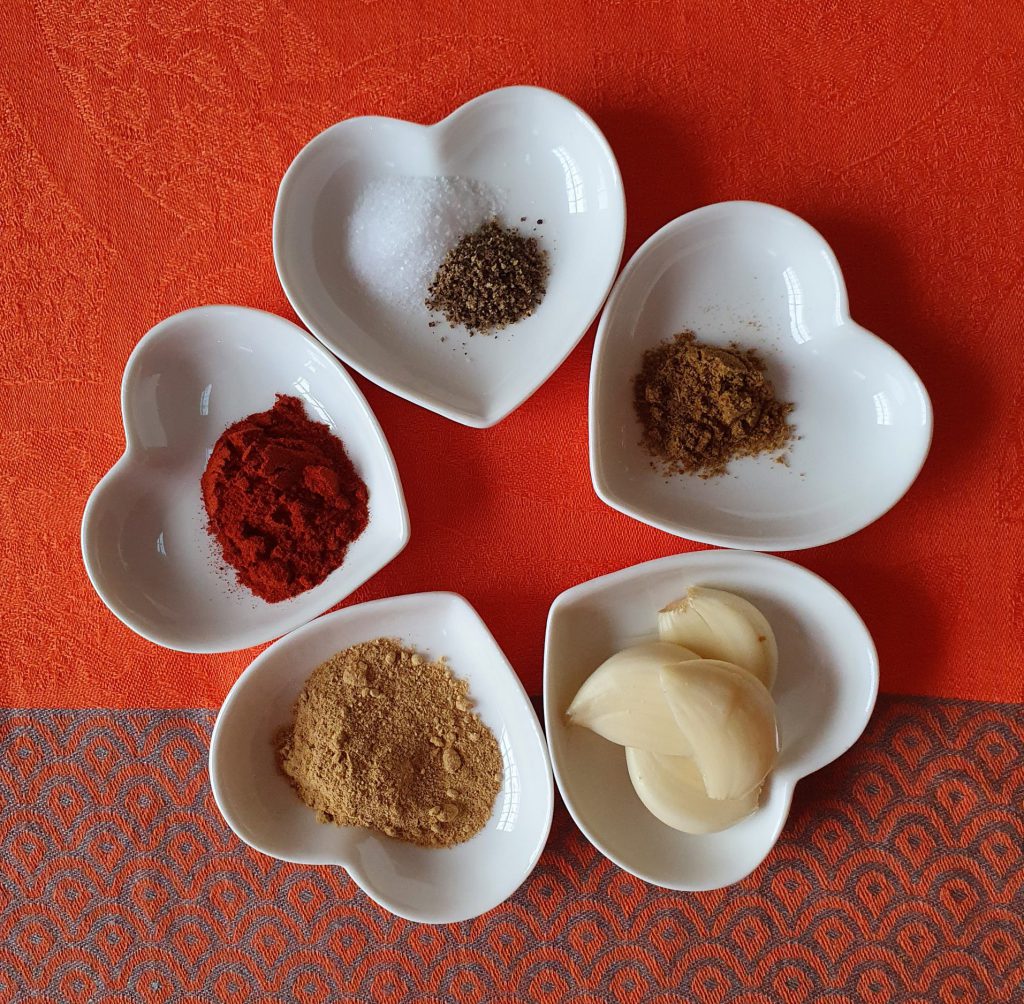 The spices for the chicken are similar as for the carrot salad, swapping ground ginger for ground cinnamon. Authentic Moroccan tagines would use chicken on the bone but I had some chicken thigh pieces and used this instead.

Marinate in a large mixing bowl:

Leave the chicken in the marinade overnight. The next day, place 150 ml water and a large pinch of saffron in a large casserole (I used a Le Crueset). Bring the water up to a simmer and then add all the chicken in. Top with 2 finely sliced red onions. Place the lid on the pot and simmer for 30 minutes.

Remove the lid and add in some preserved lemon, green olives and lemon juice. How much of each largely depends on how salty and sour you like the tagine to be, and if you like it less salty then you must remove the pulp from the preserved lemons.

Replace the lid on the pot and simmer for 20 minutes.

Add some finely chopped fresh parsley or coriander to the sauce before serving. 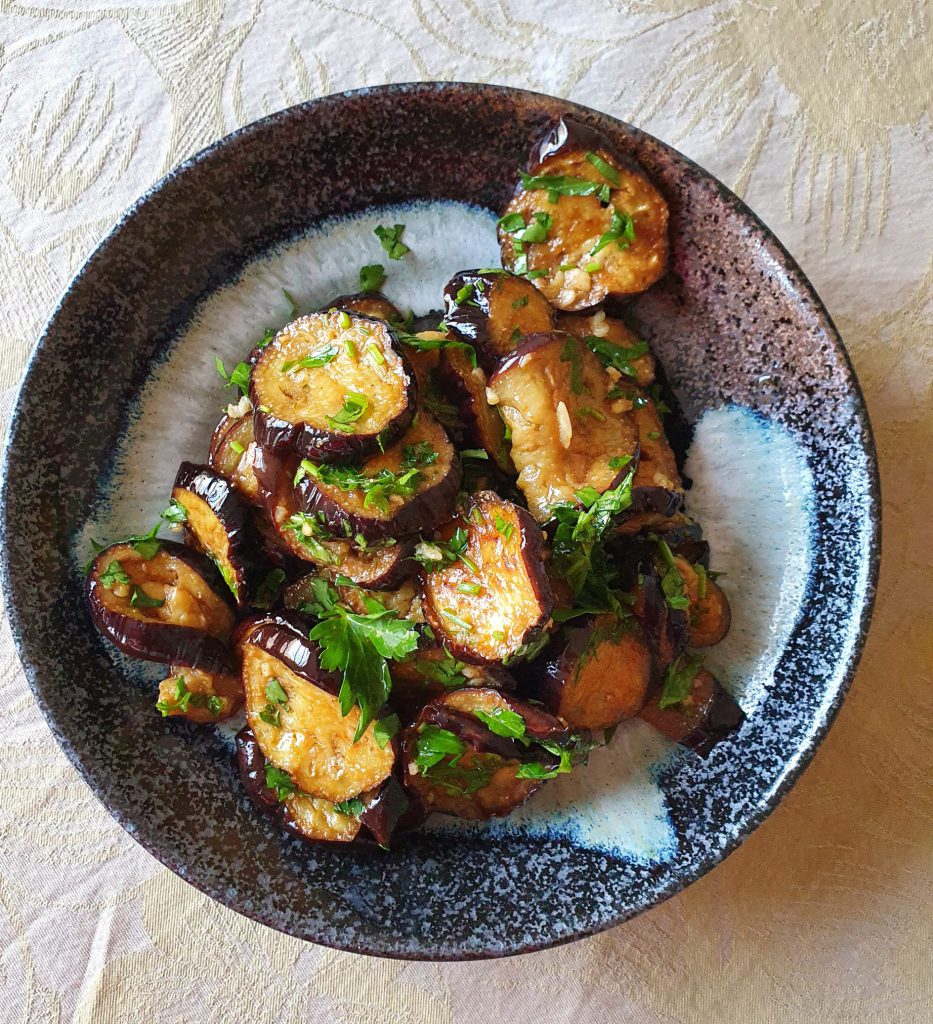 This was our favourite salad of the meal, on account of the aubergine’s melting texture. Mr Gochugaru said he could not imagine why he never used to like aubergines, and I asked him what kind of aubergines did his mum used to cook? I grew up loving aubergines because Malaysians use it in many delicious dishes: yong tau foo, sambal terung, simmered with oyster sauce, garlic and minced pork. He could not think what his childhood aubergine dishes used to be and I suggested maybe he never had them.

Slice 3 aubergines into 2 cm pieces, lay them flat on two baking trays, drizzle over a generous amount of olive oil and bake in the oven at 200 C for 20 minutes.

Whilst the aubergines are baking, make the dressing in a large bowl:

Salt and pepper to taste.

The aubergines are ready when they have softened. Tip them straight into the bowl and mix whilst still hot into the dressing. Serve at room temperature. 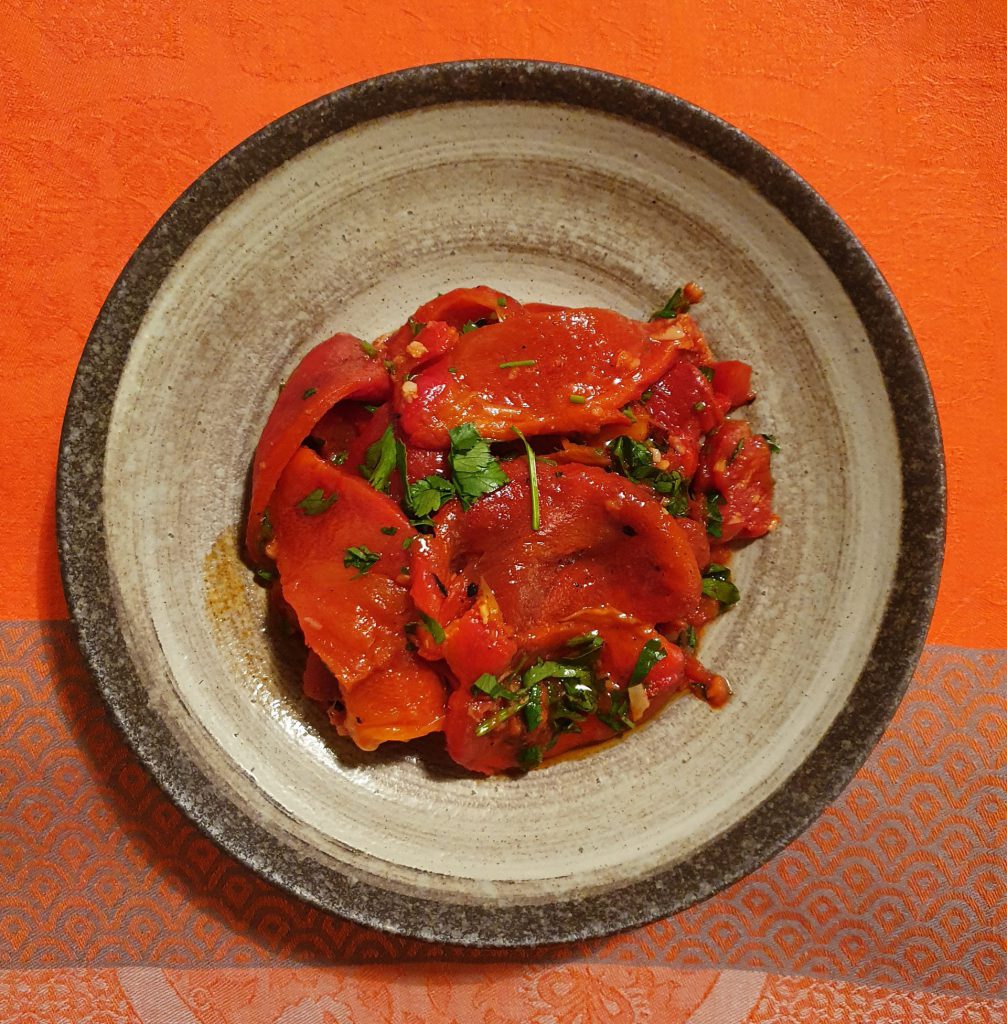 Grill 3 red peppers over an open gas flame until the skin is blackened. Cool, then peel off the skins, remove the seeds and slice into smaller pieces.

In a small frying pan, heat 1 tablespoon olive oil. Add 1 finely minced clove of garlic and 6 tablespoons of peeled and diced tomato, sautéing gently for 1 minute. Add the grilled peppers, give everything a good stir, and serve with chopped parsley sprinkled over. 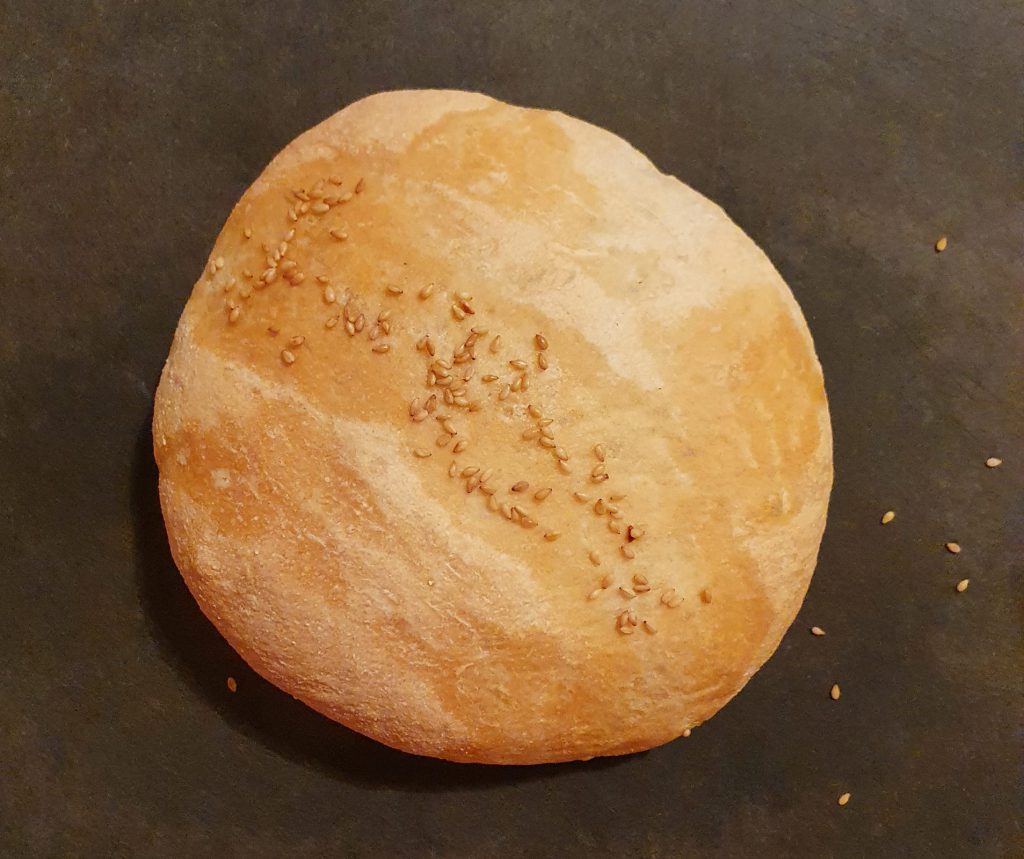 The distinctive feature of this bread is its open texture which soaks up gravy like a sponge. This is why it is so suited to accompany tagines. It keeps well and any leftovers can be toasted the next day to eat as breakfast bread with butter and honey. I used my Thermomix to make the dough, but you can use any bread-making method you are used to i.e. by hand, in a food processor or with an attached dough hook in the KitchenAid.

Turn the dough out into a large oiled mixing bowl and leave it to rest for 15 – 30 minutes, until it has puffed up.

Divide the dough into four equal parts and form each part into a circle. Leave to rest for 45 – 60 minutes.

Towards the end of the proofing time, preheat the oven to 200 C.

Brush the top of the bread with some Argan oil and sprinkle over some sesame seeds. Bake for 20 minutes. Cool the bread a little before serving.

This is the only Moroccan cookbook you need: The Food of Morocco by Paula Wolfert, published by Bloomsbury, ISBN 9781408827468 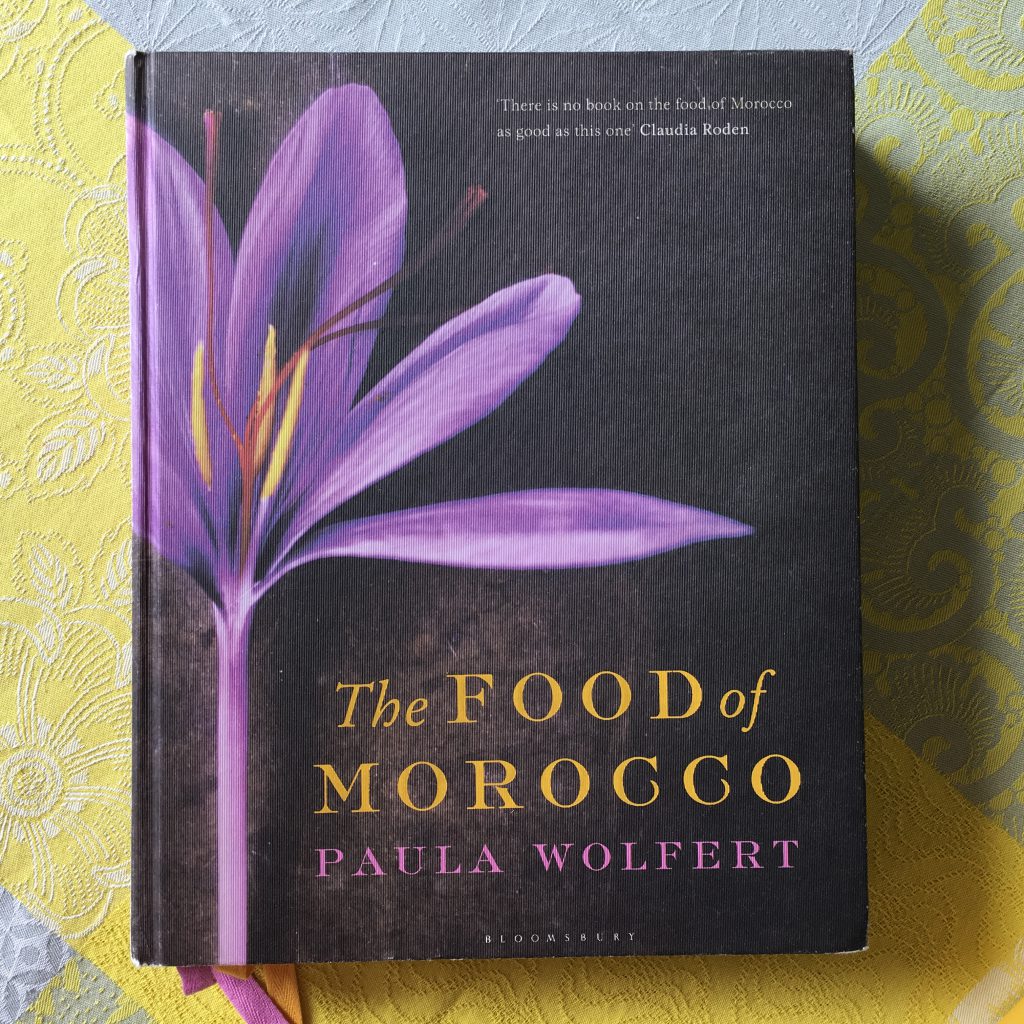