A short walk in Buam-dong within a day of longer walks. 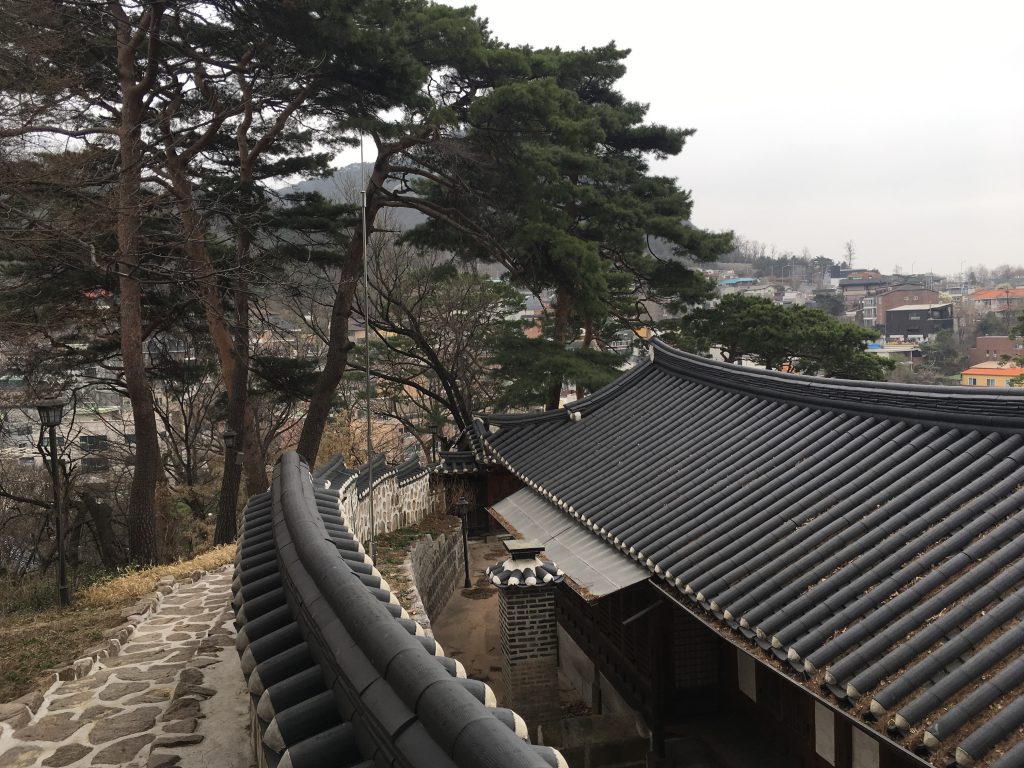 Generally speaking, Mr Gochugaru and I like walking. In London, if we are in the centre of town, it is better to walk as so many interesting museums and eating places are concentrated cheek-by-jowl within a small areas. After 30 years of living there, I don’t find London big at all.

Seoul, by contrast, is still very big to me. I think mainly this is because it really is a big city. Nevertheless, due to a combination of its marvellous public transport system, a bit of planning, quick meals and concentrating only in the area close to our hotel, we have done a lot of walking, seeing and eating today.

Samsung Health records that we walked for 178 minutes, took 17032 steps over 12.31 kilometres. Unfortunately as this walking was done at a snail’s pace, only 666 calories were used up. This possibly only covered one of the following: the shared cooling-down Strawberry Yogurt Snow from Angel-In-Us (we even skipped the cream) or the shared mid-afternoon Rhubarb and Strawberry Crumble from SCOFF, or the meat-free bibimbap we had for dinner.

As for everything else, I hope that the measly 2000 calories allowed daily for women covers it. Men are allowed 500 more calories so Mr Gochugaru had a beer with his fried chicken lunch and a nightcap of some chilled soju. Do men really use up more energy? Who invented this calorie guide? A man? 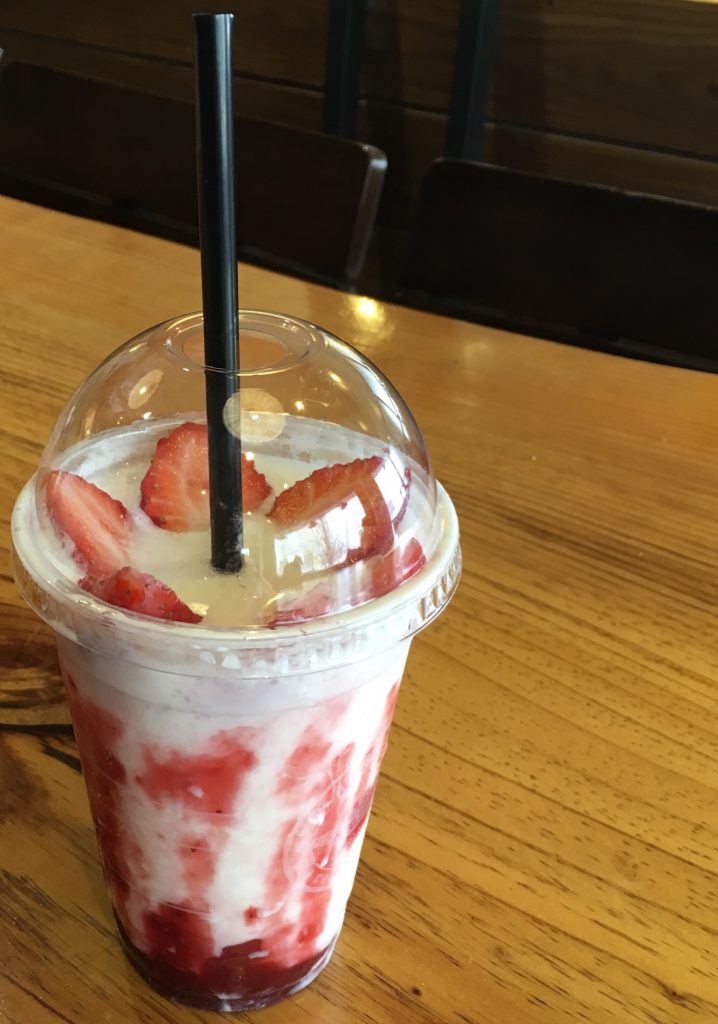 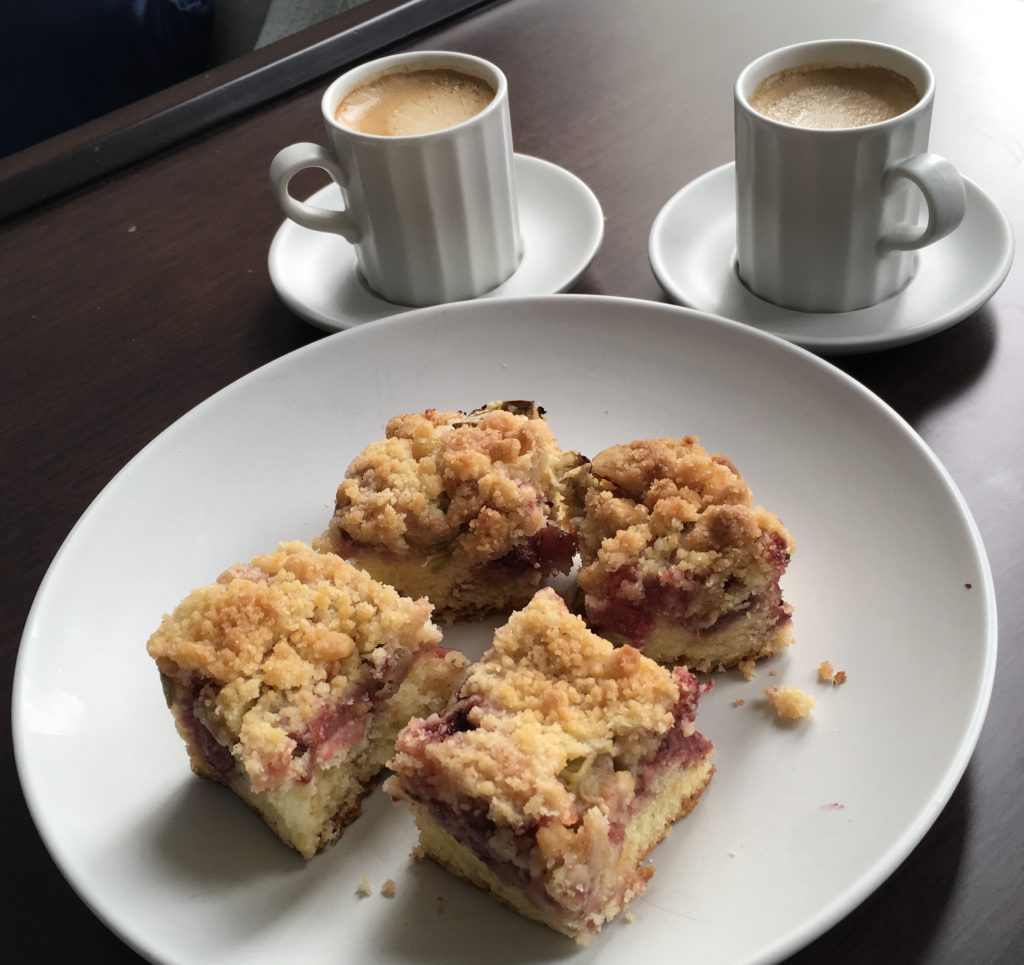 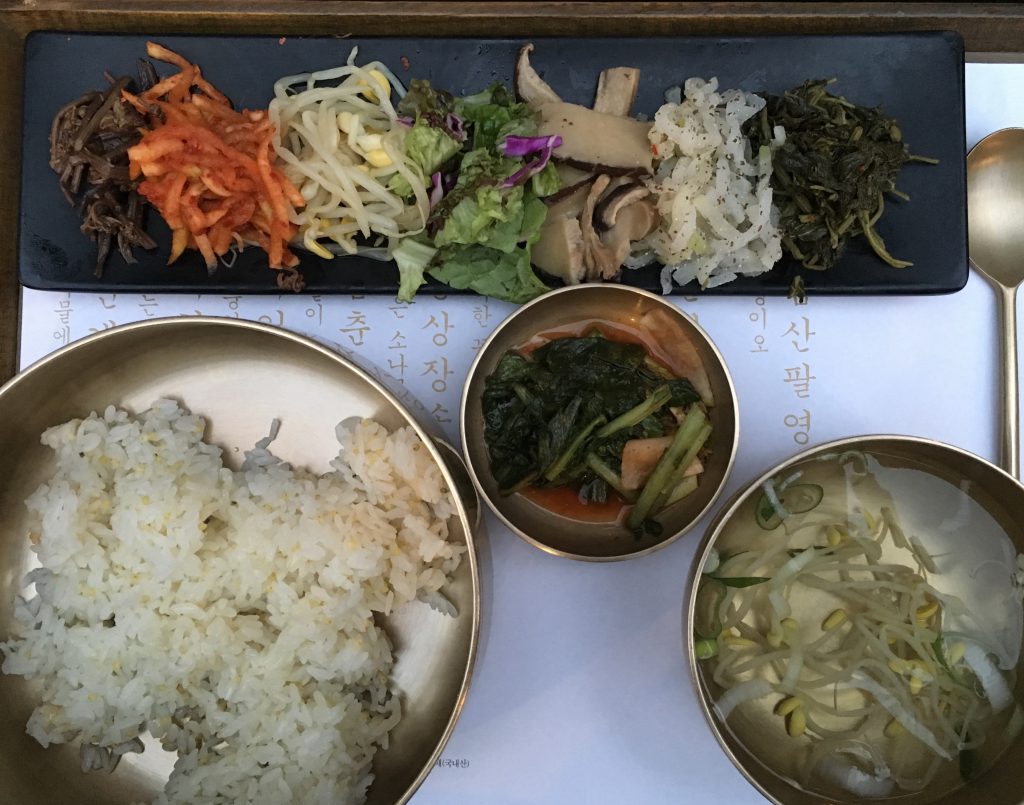 Breakfast was the bread from Meal (bought yesterday in Seongsu-dong) which turned out to be more of brioche and less of bread. It was soft and buttery. Meal says it uses non-fat milk instead of water in its dough but I wonder if there is fat from eggs and butter…it truly was a delight to eat. 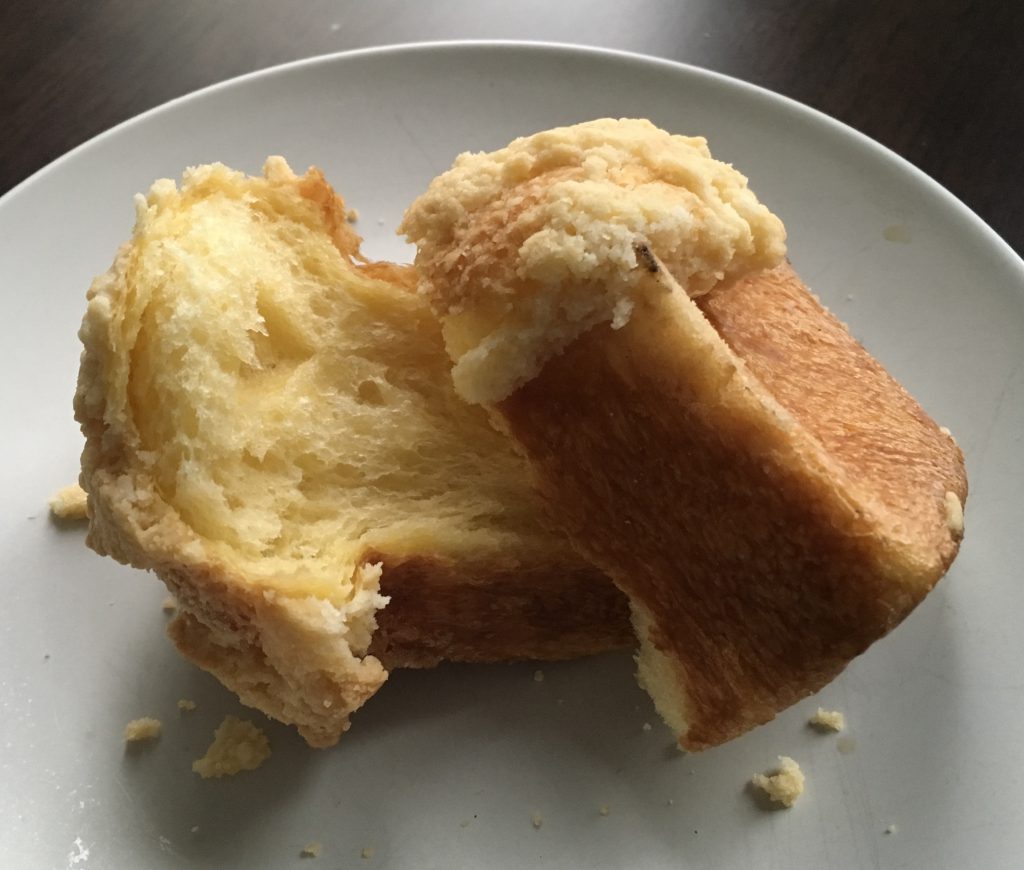 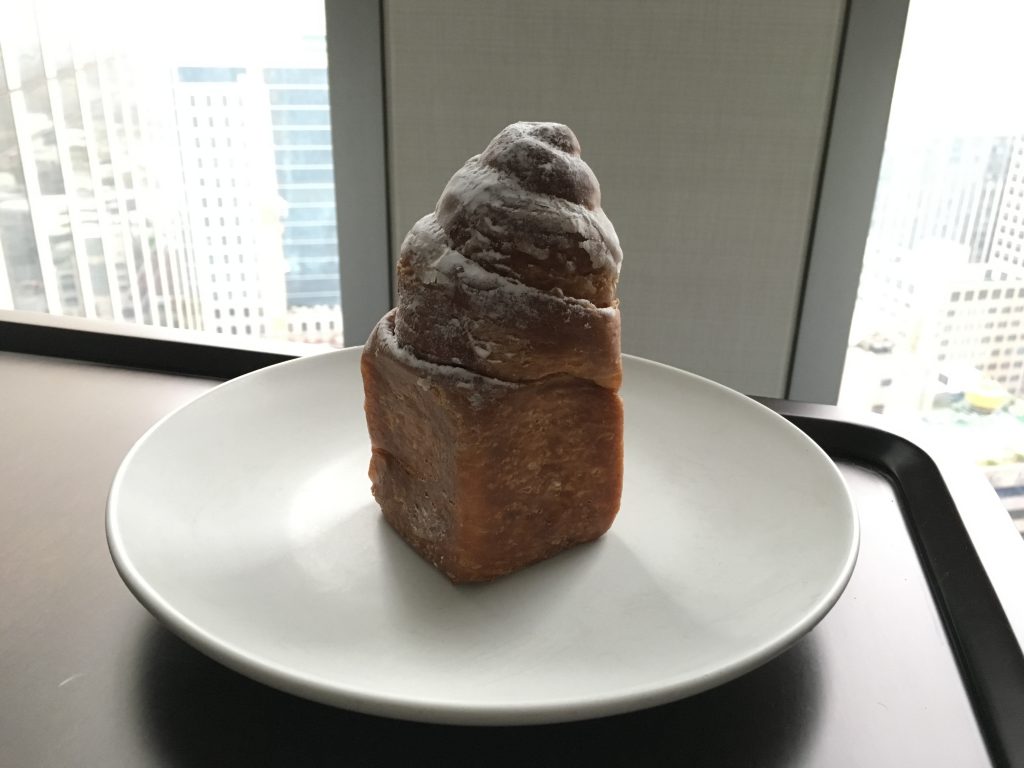 Suitably fortifed, we head to Seoul Anglican Cathedral which is near to our hotel and thus convenient for an Easter Day service. It boasts a fine organ but I have to admit I am not a fan of organ music. 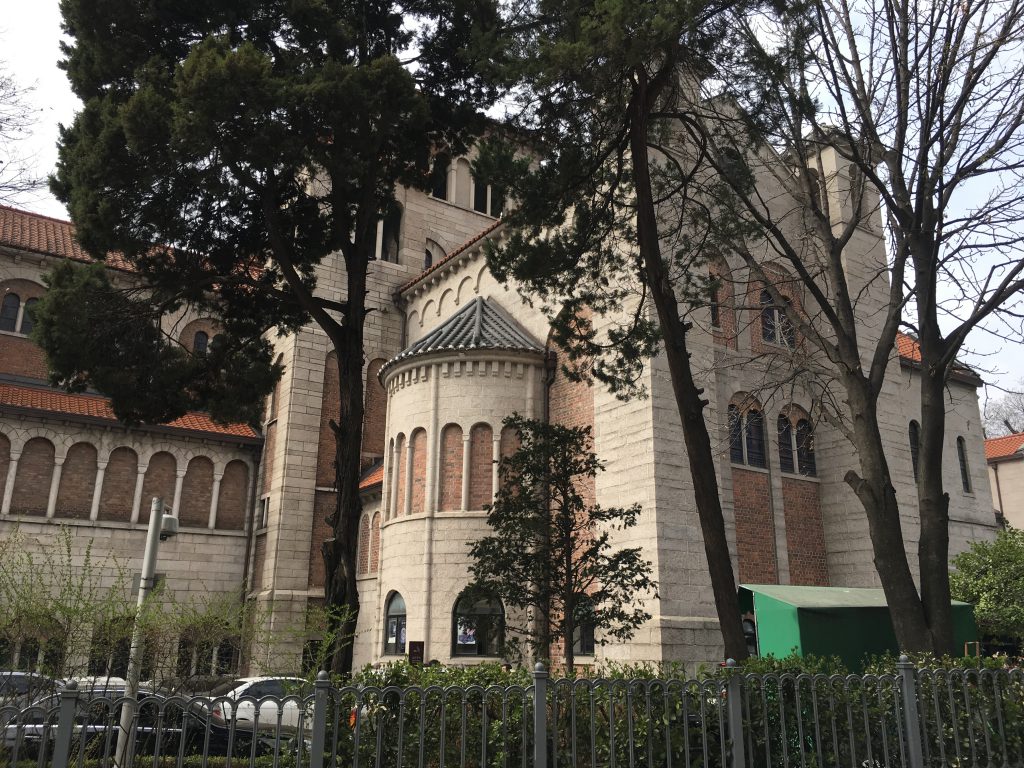 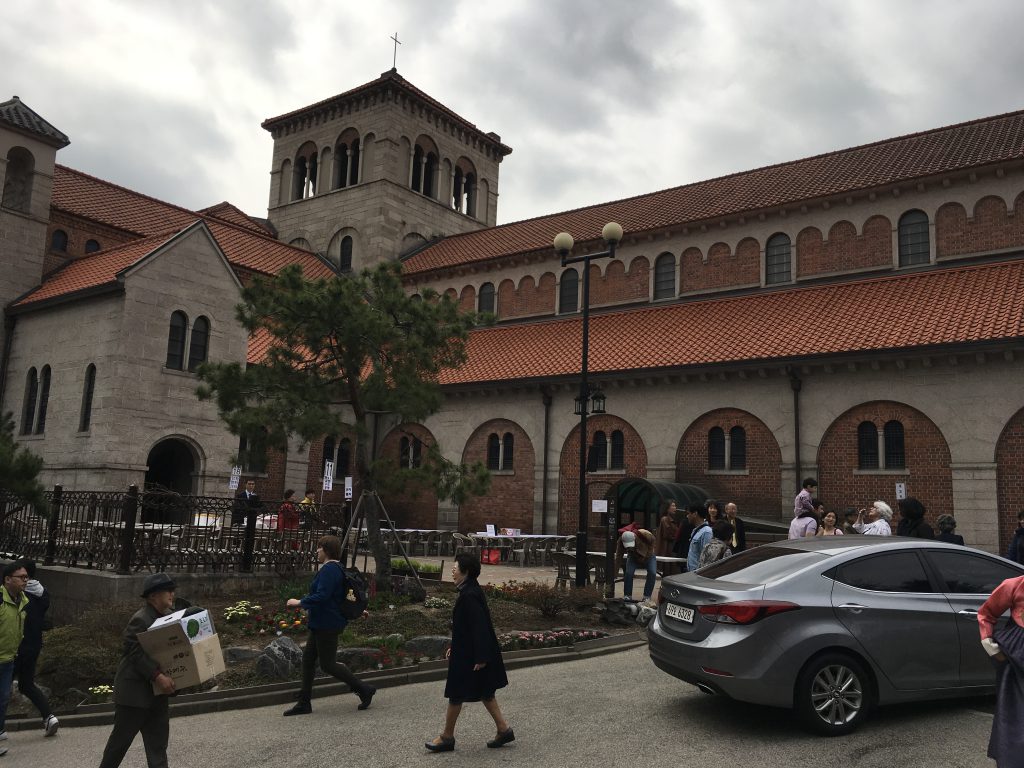 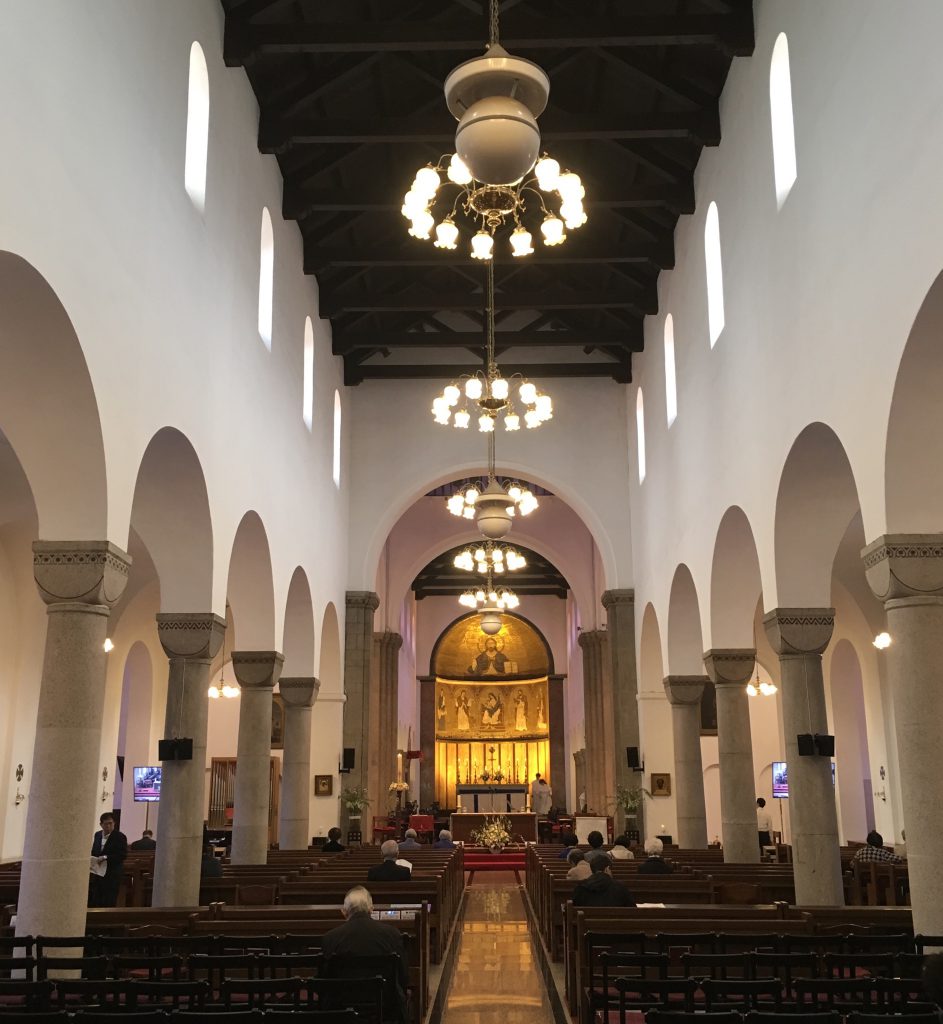 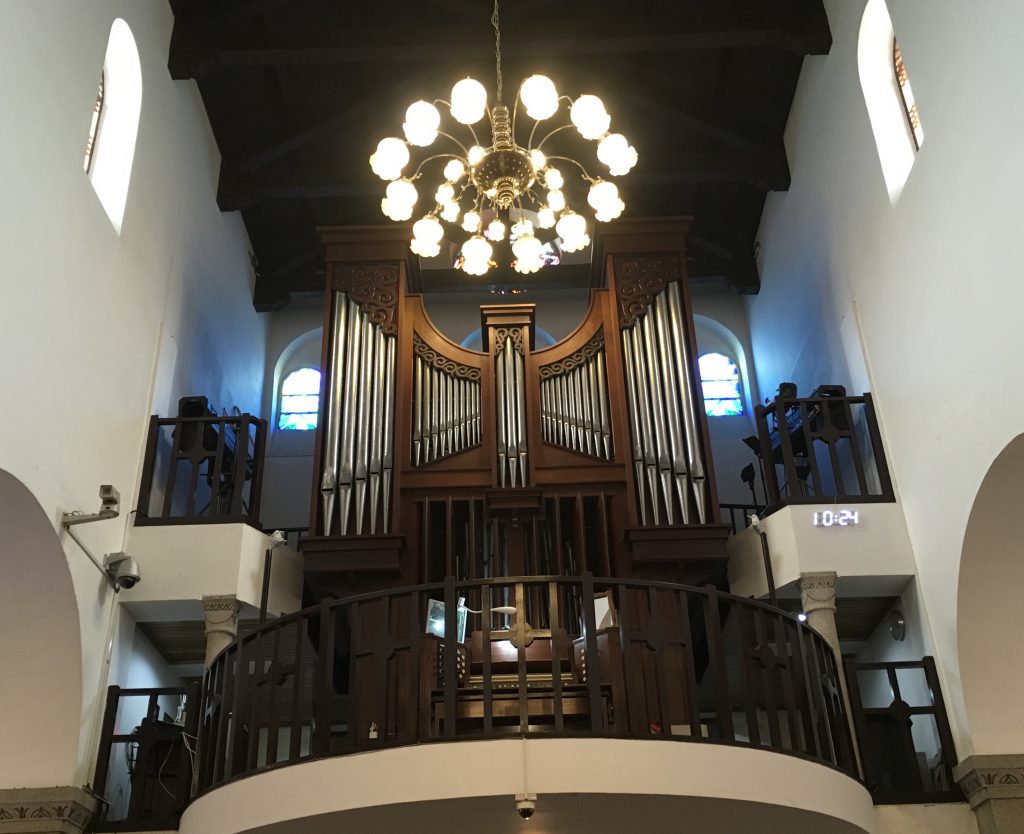 It is easy to get to Buam-dong, which is an area north of the main palace Gyeongbokgung. If you get to either Gyeongbokgung or Gwanghwamun subway stations, a local bus connects you to the area. Citymapper has the precise directions and you need to tap in Baekseokdong-gil as your destination as it puts you on the correct bus. You can take a taxi too and we have walked down before after a visit, but I would not recommend walking up as it is on a hill.

There are several things to do in Buam-dong but we started with SCOFF which is as dream fantasy as it gets for those missing British cakes. Even I, master baker, who bakes cakes like these daily, could not leave empty-handed. I even regretted not starting a bakery like this myself but Mr Gochugaru reminded me that I did think about it during one of my first visits to Seoul. I had said: what this city needs is a British Bakery…maybe I should start one. I couldn’t of course as sadly I don’t live here, so to whoever is behind SCOFF, thank you for doing this and making life in Seoul even more fun and even more delicious. The name is genius and the direction to eat more gluten is quite welcome. 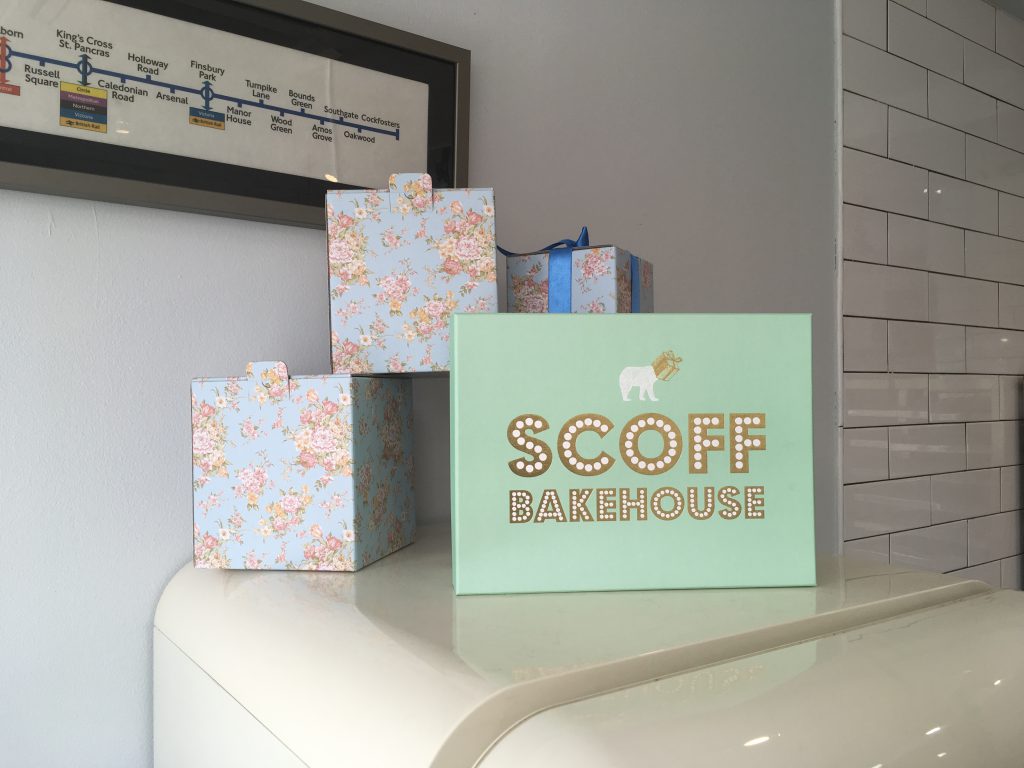 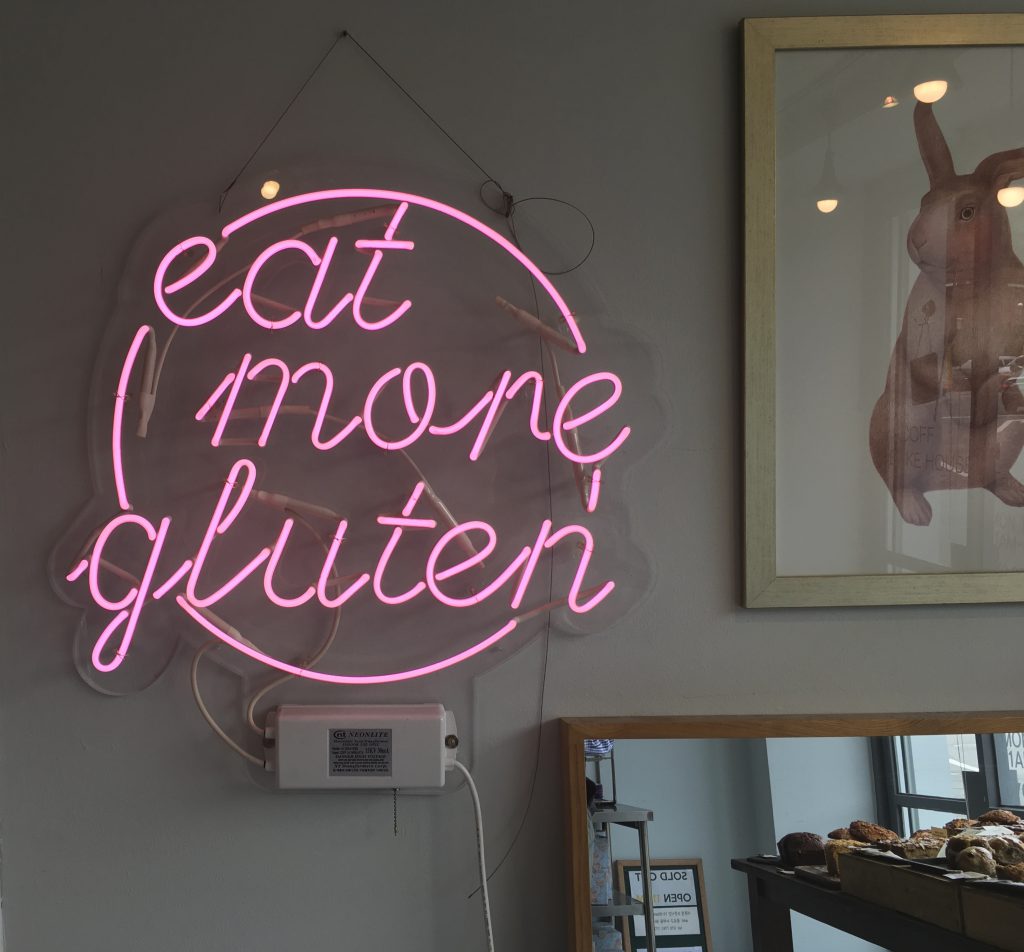 A few practilites about SCOFF. It is a small shop with a big table heavily laden with lots of good things to eat. If the shop is crowded you need to think about what you want to buy because a) everything is good and b) everything is generously-sized. There is no parking as the shop is situated on a narrow one-way street and people get driven here to pick up something under 3 minutes while the driver waits in the car. Therefore coming on foot is easiest unless you know where to park.

As you enter the shop, pick up a pair of tongs and one of their chic retro enamel plates. It is a good thing the plates are not trays as then there would be a temptation to buy too many cakes. The shop is closed on Mondays and Tuesdays. Despite trays of cakes being baked daily, the shop shuts when the cakes run out. So you need to arrive earlier rather than later, or at least call ahead to put in an oder to collect later. 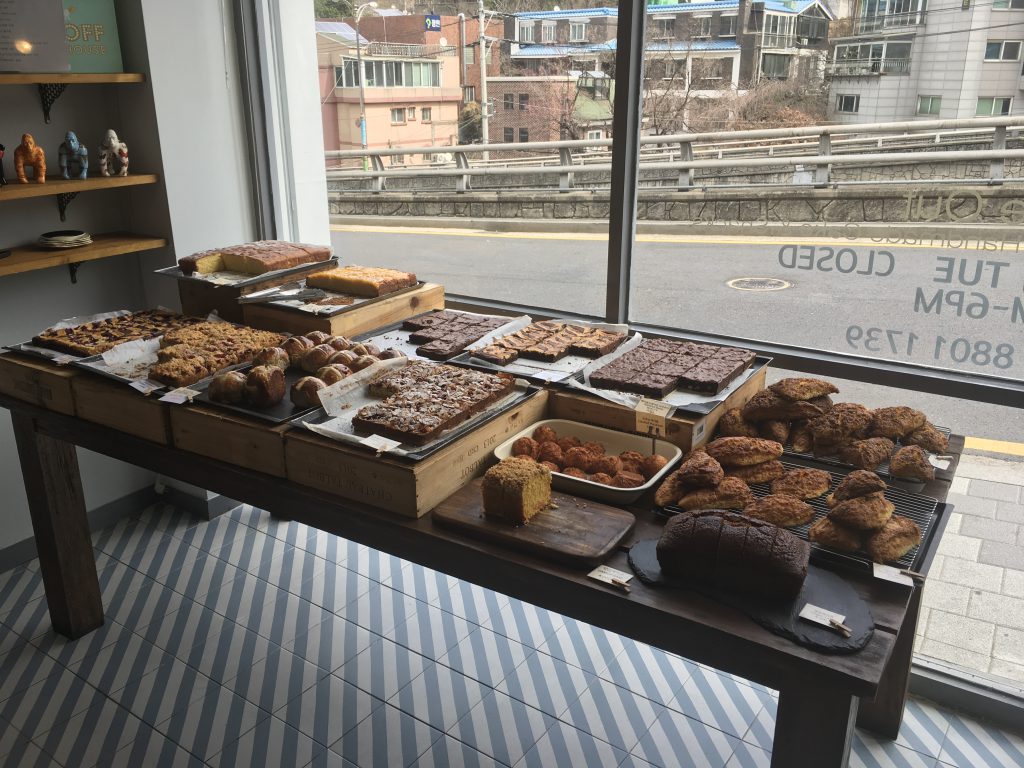 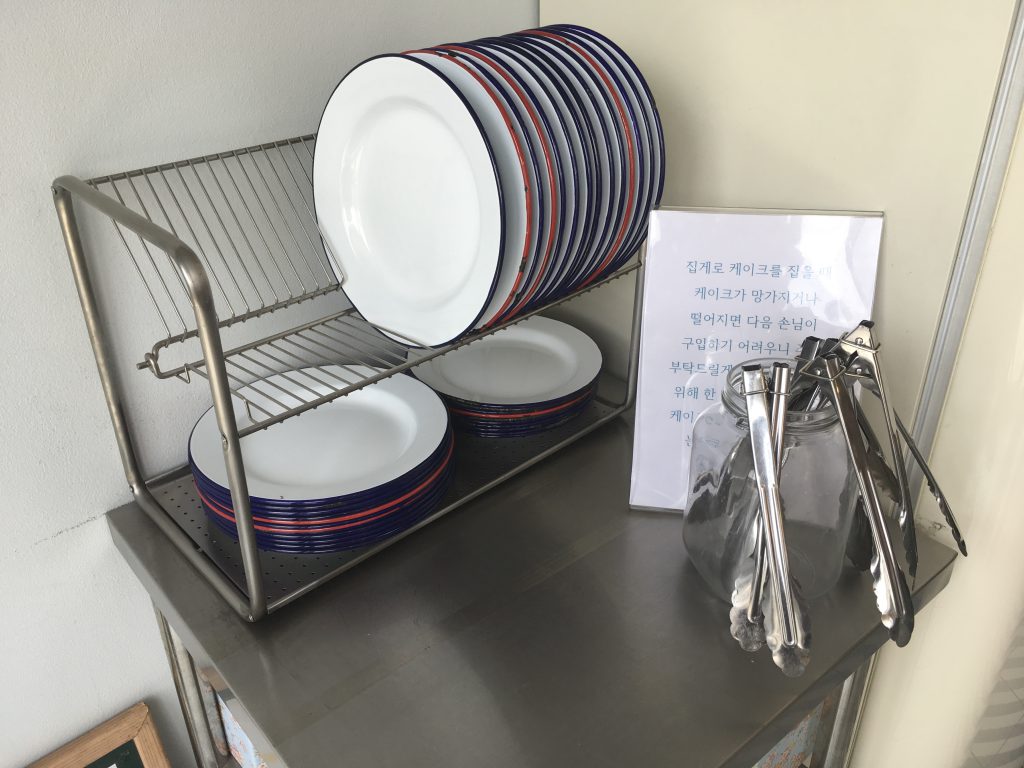 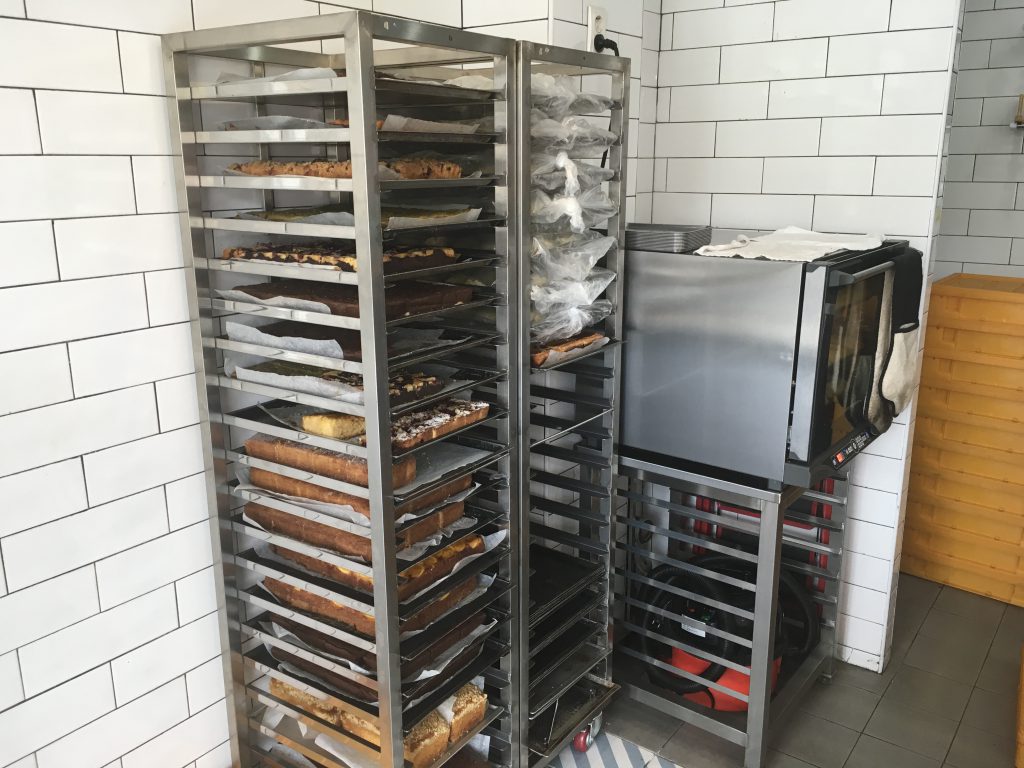 As for what to buy and scoff (which means to eat hurriedly and greedily) here are a few photos so you can plan ahead. I guess there will seasonal variations and specials. There were hot cross buns this morning. 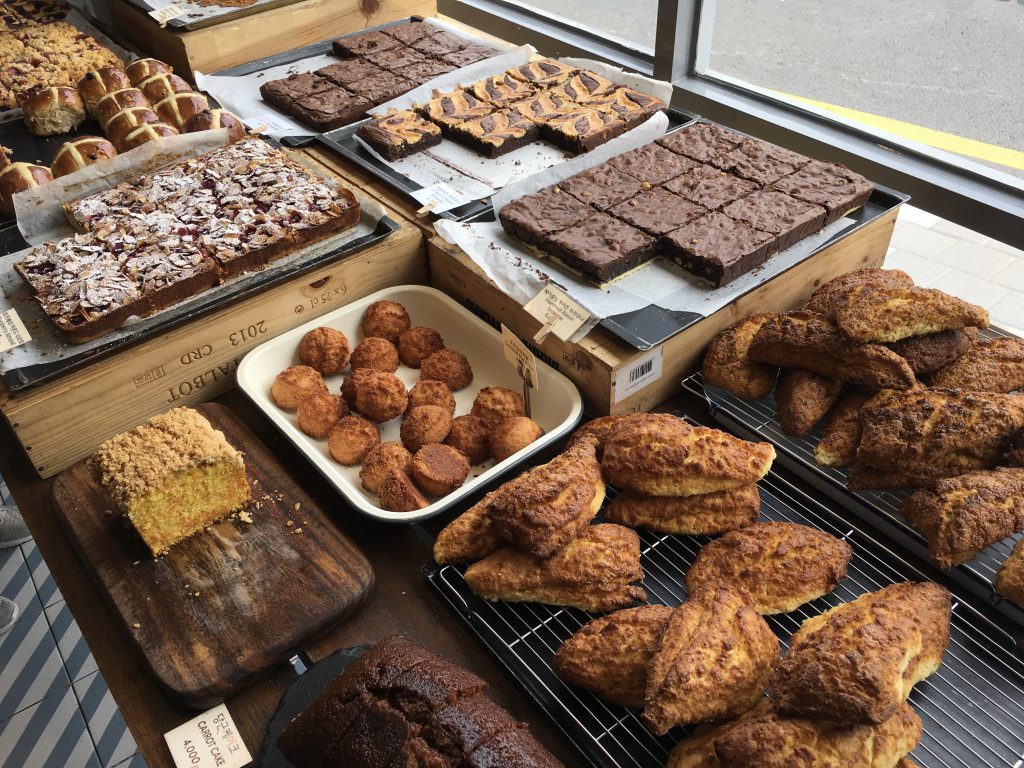 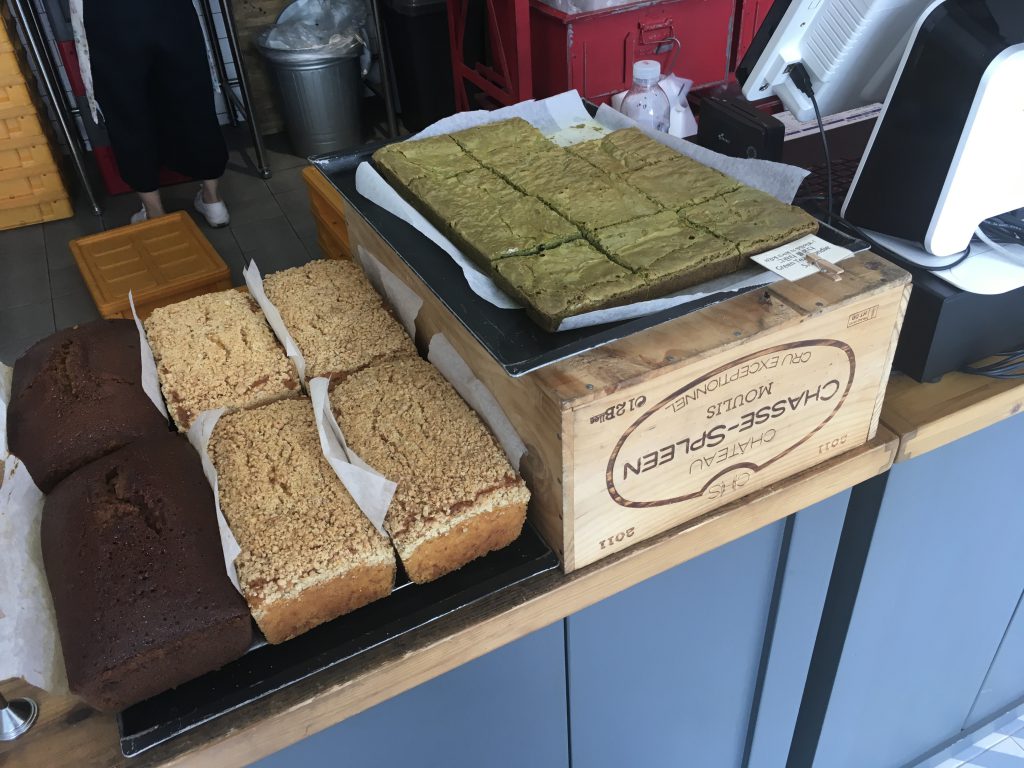 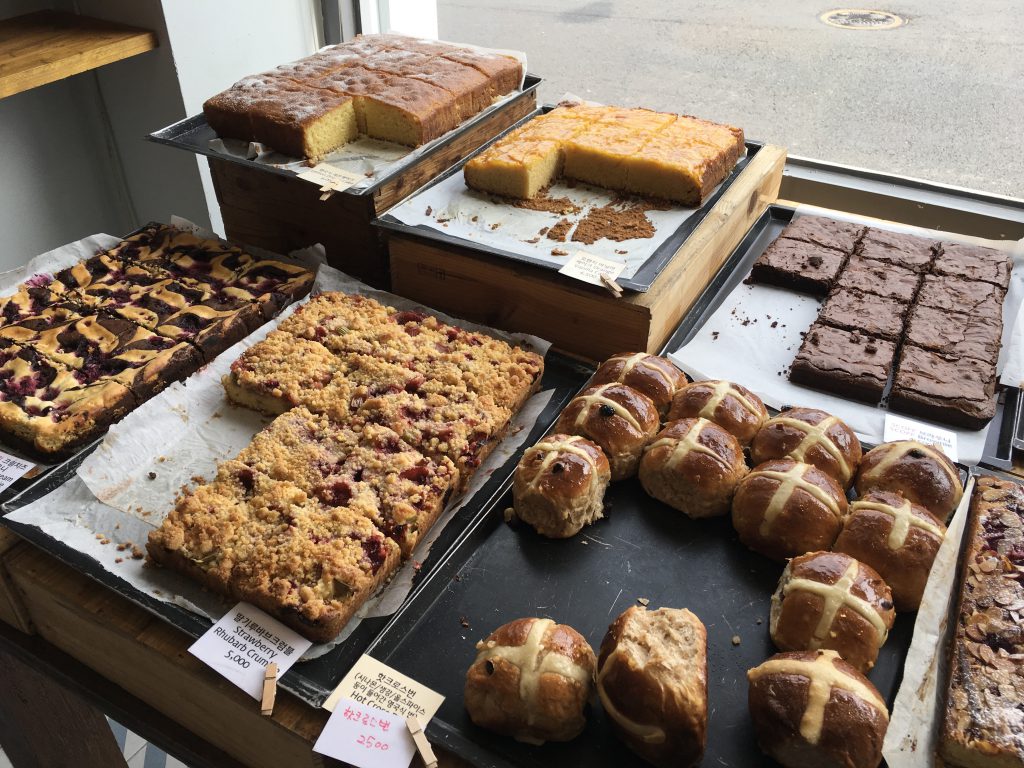 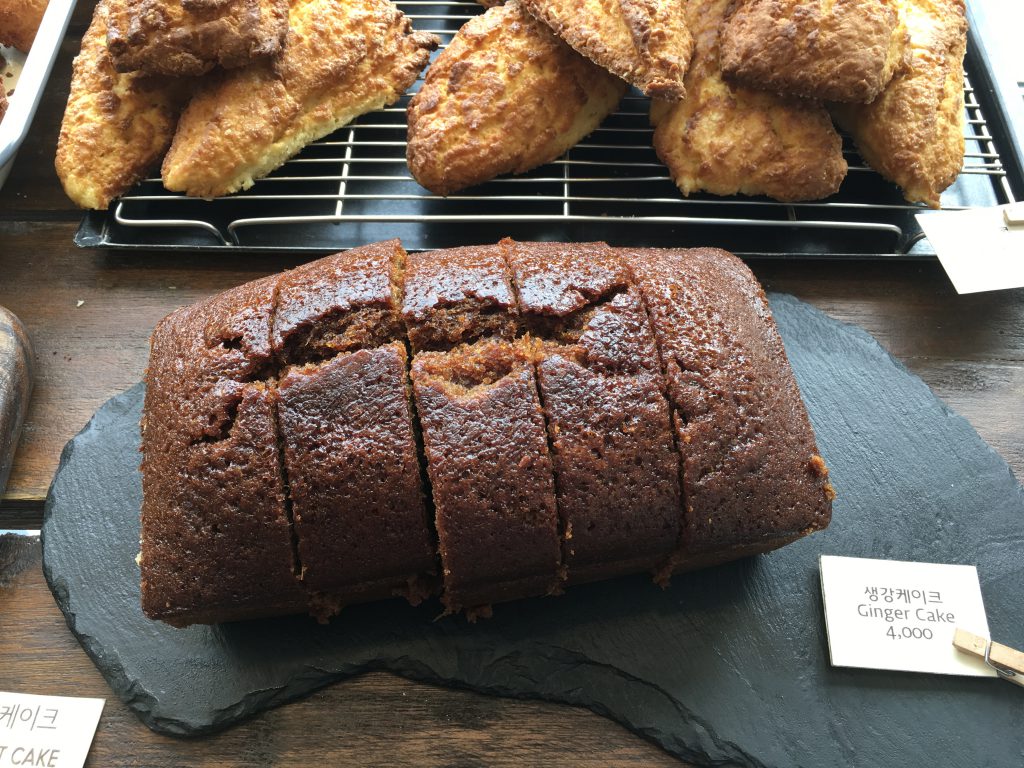 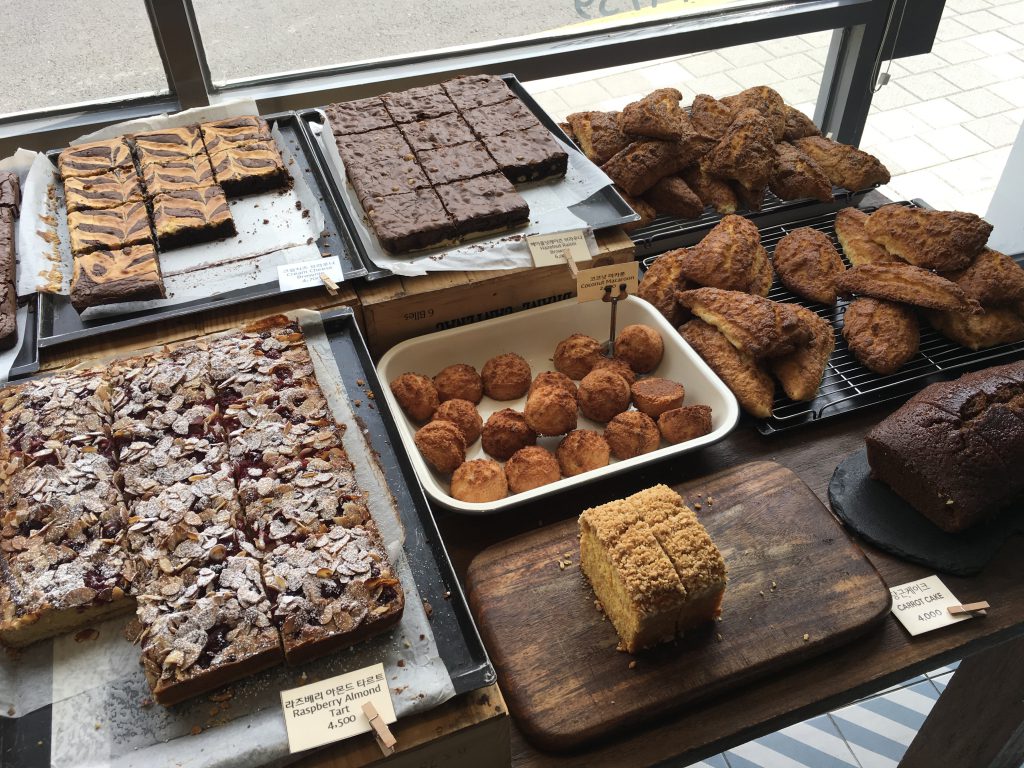 After this foray into cakes, we headed for fried chicken round the corner at Gyeyeolsa. They serve more than fried chicken (for example a spicy chicken stew and a spicy whelk and cold noodle salad) but as far as I could see, everyone was having the fried chicken. There were cyclists and hikers who had done their exercise beforehand and also regular folks who had come for a Sunday treat. 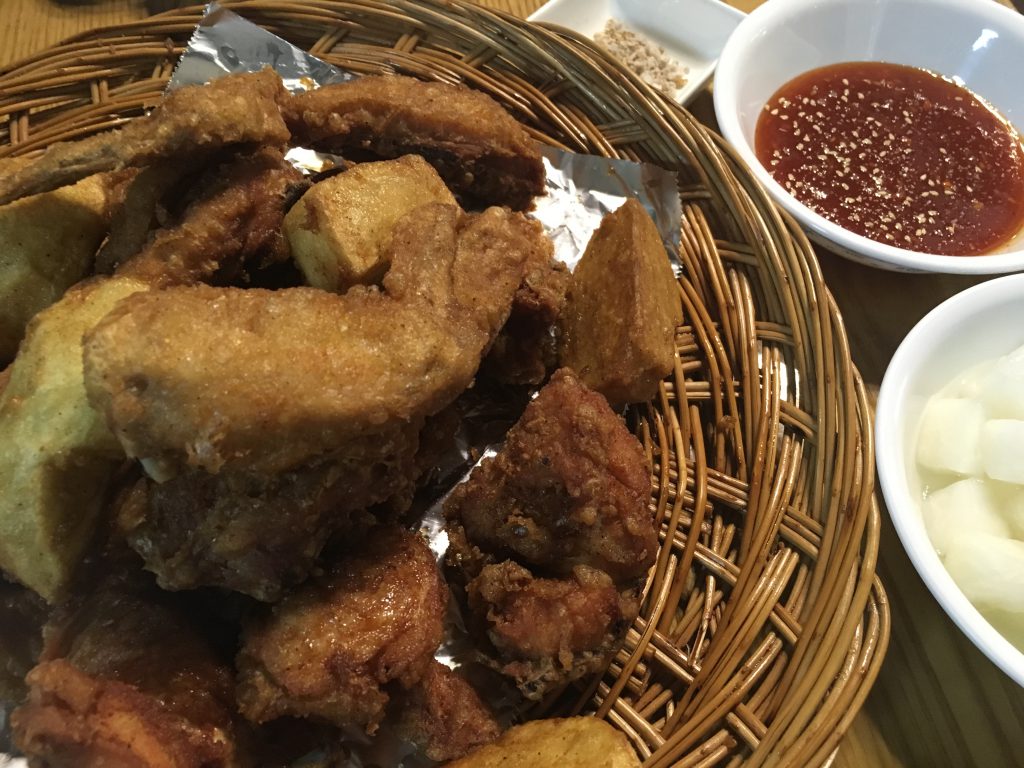 Afterwards we walked around the corner to Seoul Museum. Their website is in Korean as are the exhibition notes. However as it is contemporary art I think you can make up any story you want and to be honest, it is more fun that way.

There was a room of photos of a grown man who goes around famous locations wearing a just pink tutu. Mr Gochugaru said maybe he lost his wife and this was part of his grieving process, and maybe he remembers her when he goes to these different places and wishes she were there with him. I said maybe he wants to be that gnome in the film Amelie.

There is a pink tutu (maybe even the pink tutu) where you can stand behind to be photographed..however for authenticity you do need to remove most of your clothes (men only). 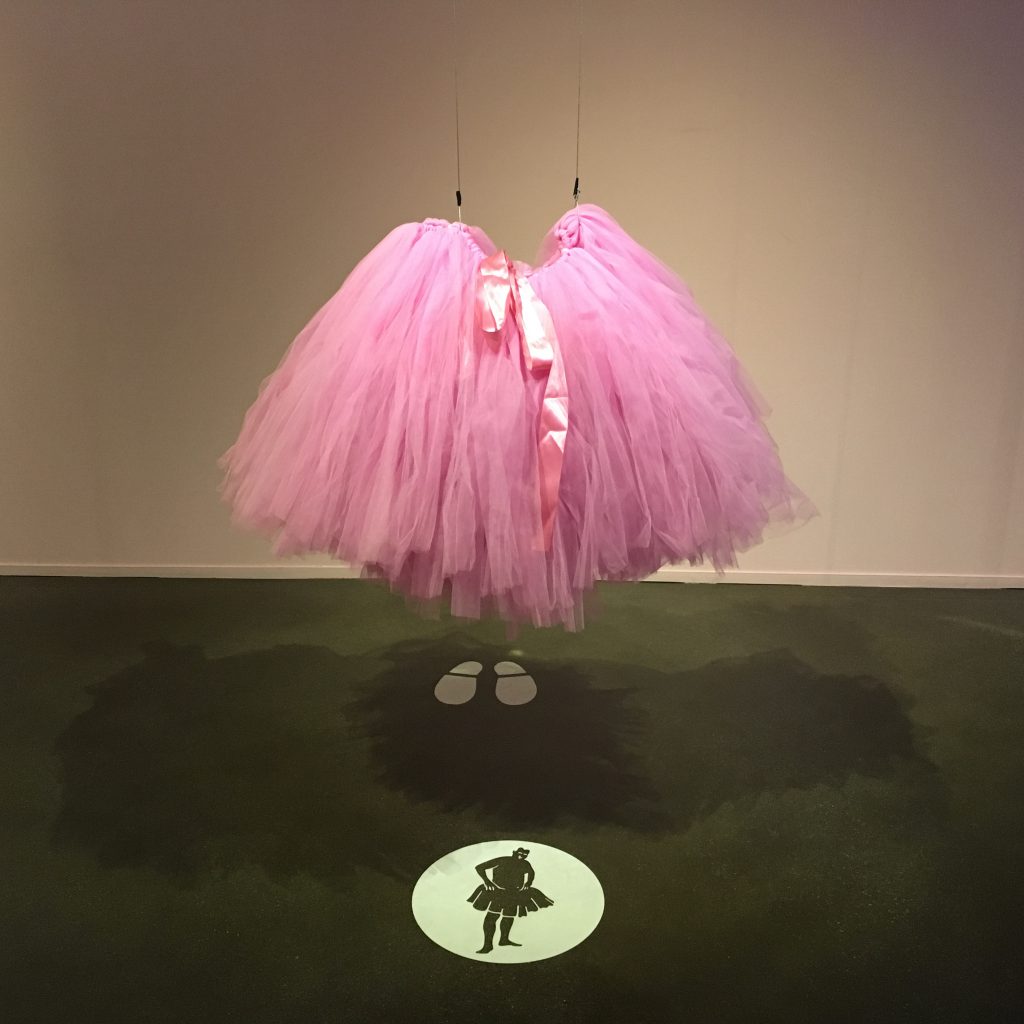 Behind the museum, accessed via the 3rd floor, is a peaceful garden with a scenic paths for walking aound. This was once a royal villa and there are seats dotted around where you can admire the views and have a picnic (think National Trust garden). The ancient pine trees especially are lovely to behold. 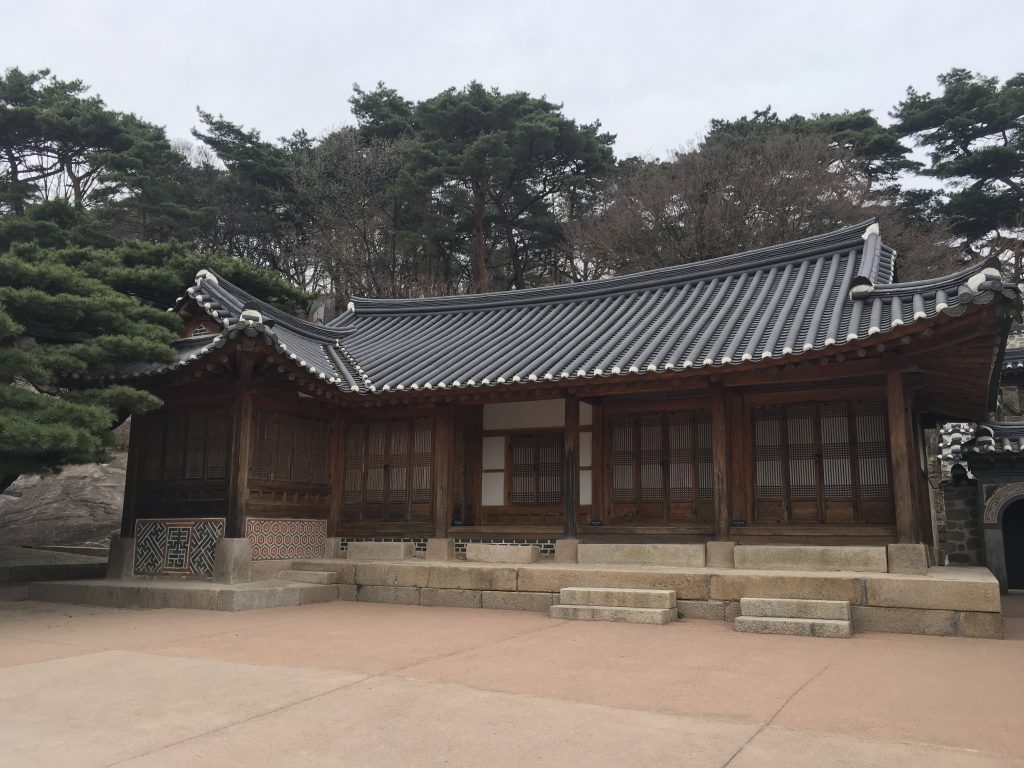 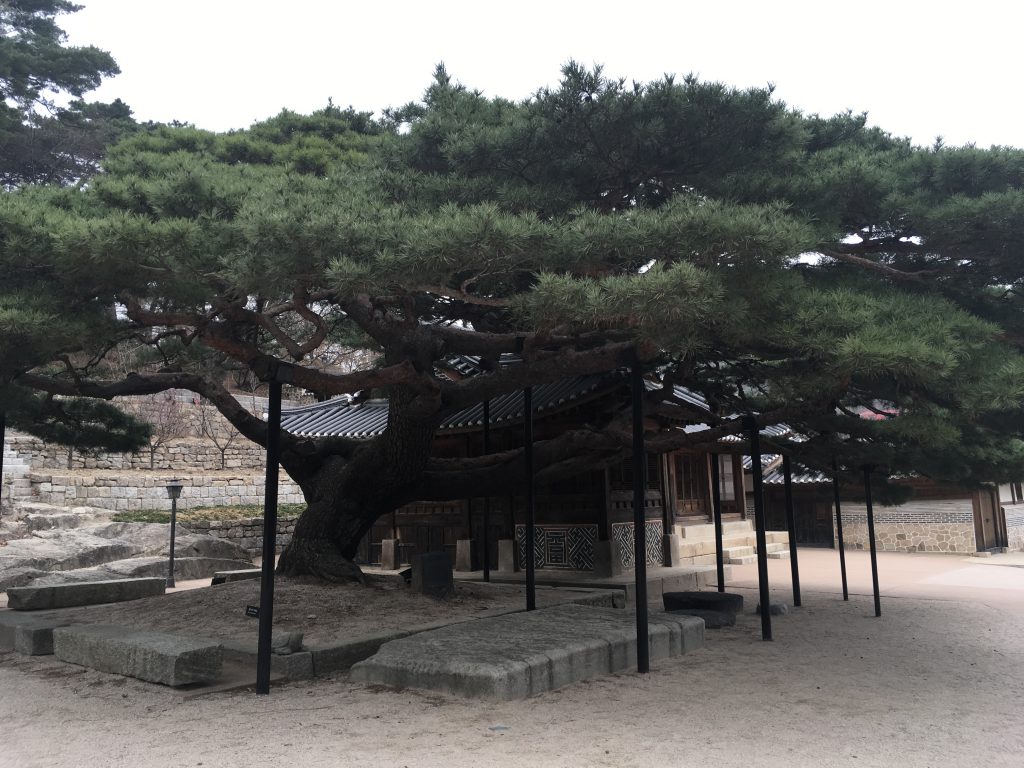 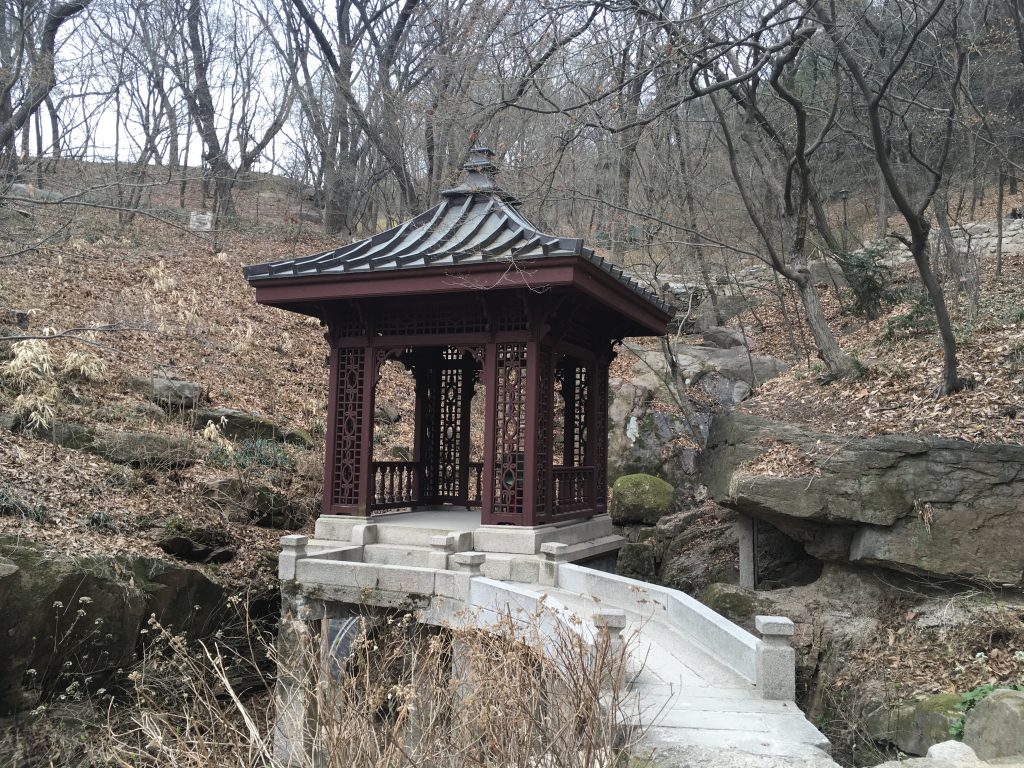 At 4pm, as there is an English guided tour then, we head to Jongmyo Shrine where the ancestral tablets of the deceased kings of the Joseon Dynasty are kept. 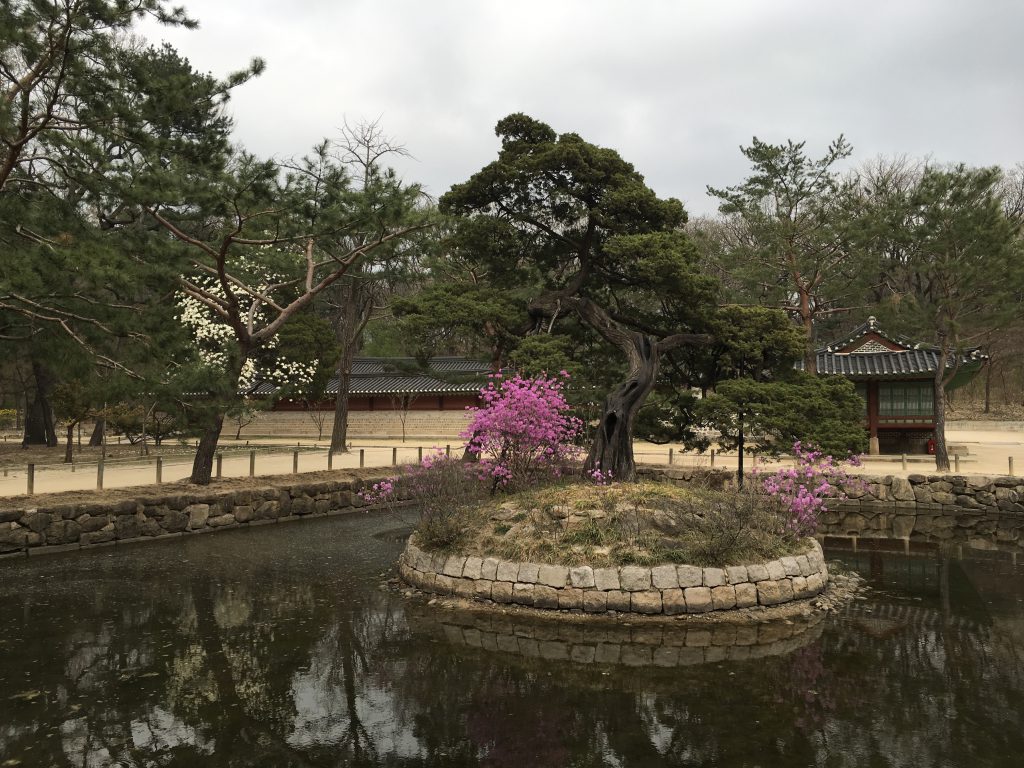 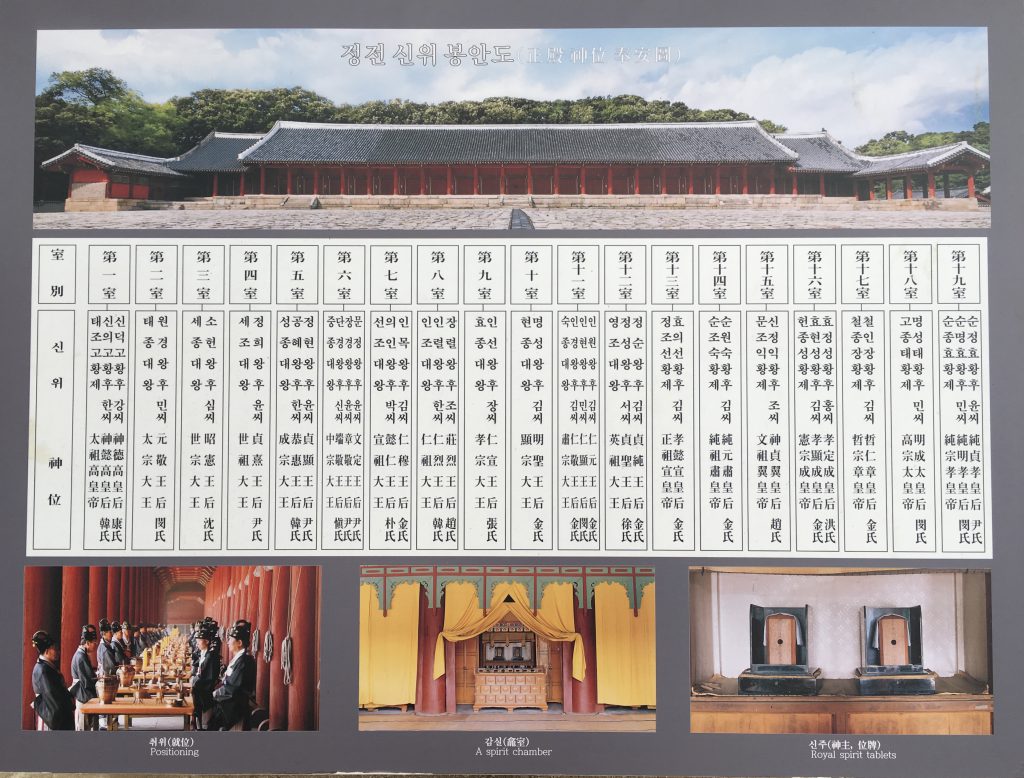 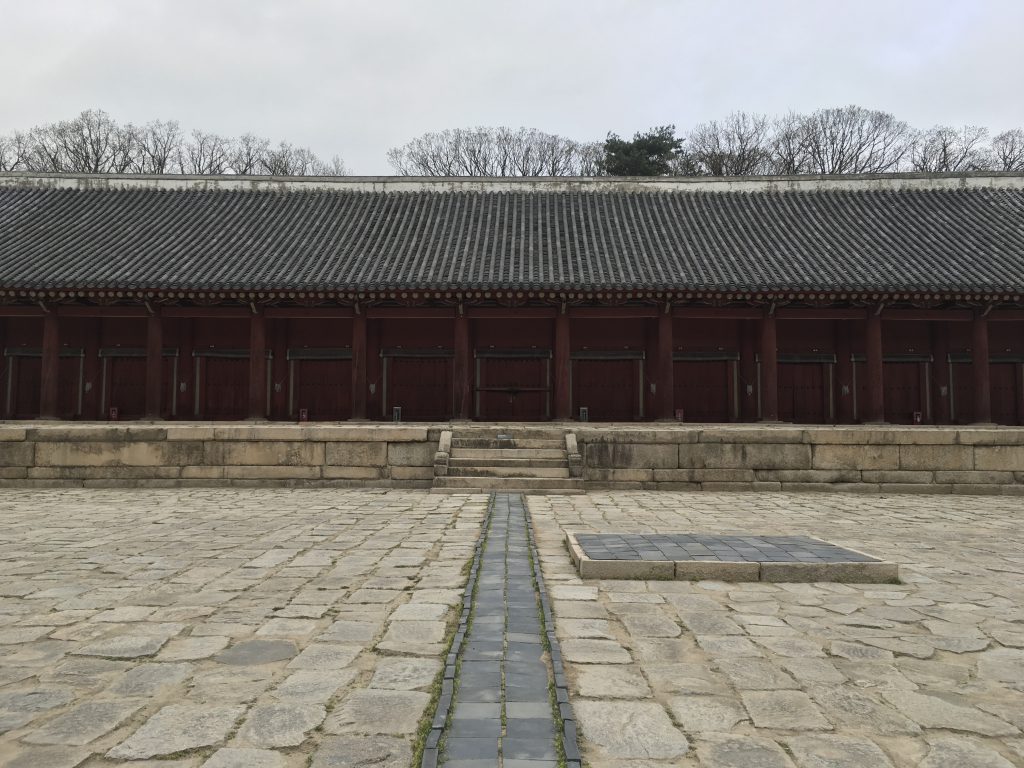 Afterwards we take the bus up to N Seoul Tower and the cable car down to dinner at Mokmyeoksanbang which is a bit of a mouthful to pronounce but maybe it befits the vegetarian bibimbap we chew through (good chewing as it was marinaded vegetables).

Feeling virtuous we then walk to Shinsegae to eat some frozen milk in the form of an O’slo ice. 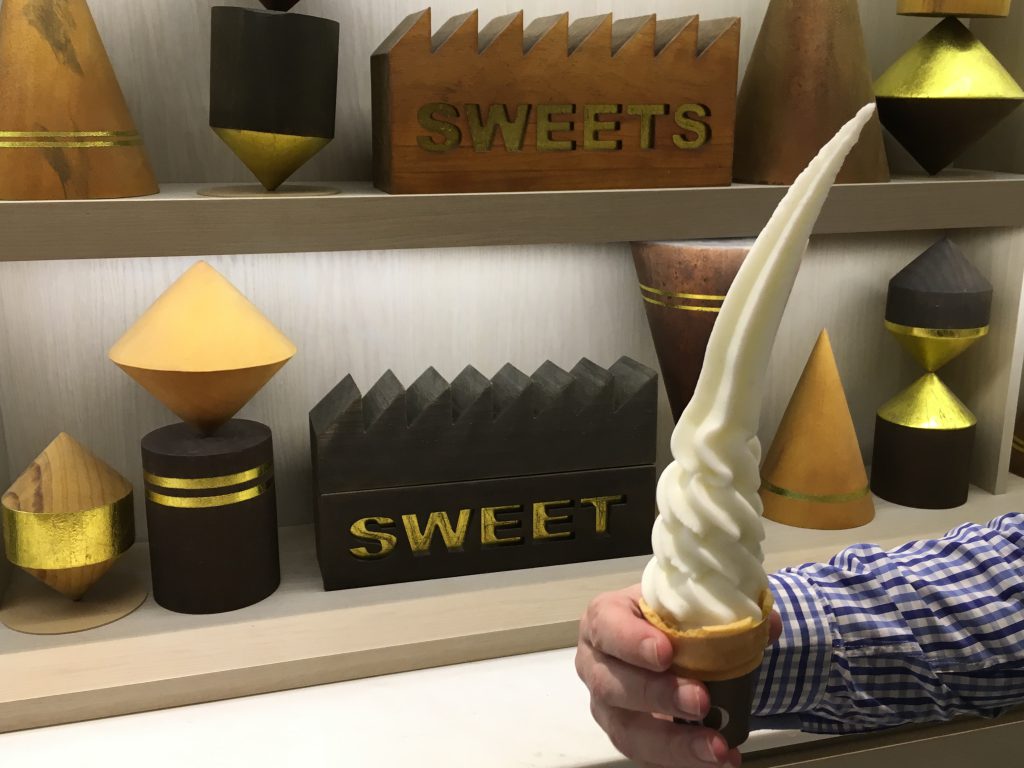 Addresses for all the places mentioned will be added later as it is now coming up to breakfast time in Seoul as I complete this writing.