For the past few days it has rained heavily around 4 am but on our last night there was a truly heavy thunderstorm with great flashes of lightning. Had I been brave enough I would have gone out to the balcony to capture images of the lightning.

Instead I lay in bed and thought of the creatures in the jungle. The rainforest on Pangkor Laut is estimated to be about two million years old. Some of the animals that currently call this island home include pangolins, long-tailed macaques, three types of snakes, water monitor lizards and fruit bats. 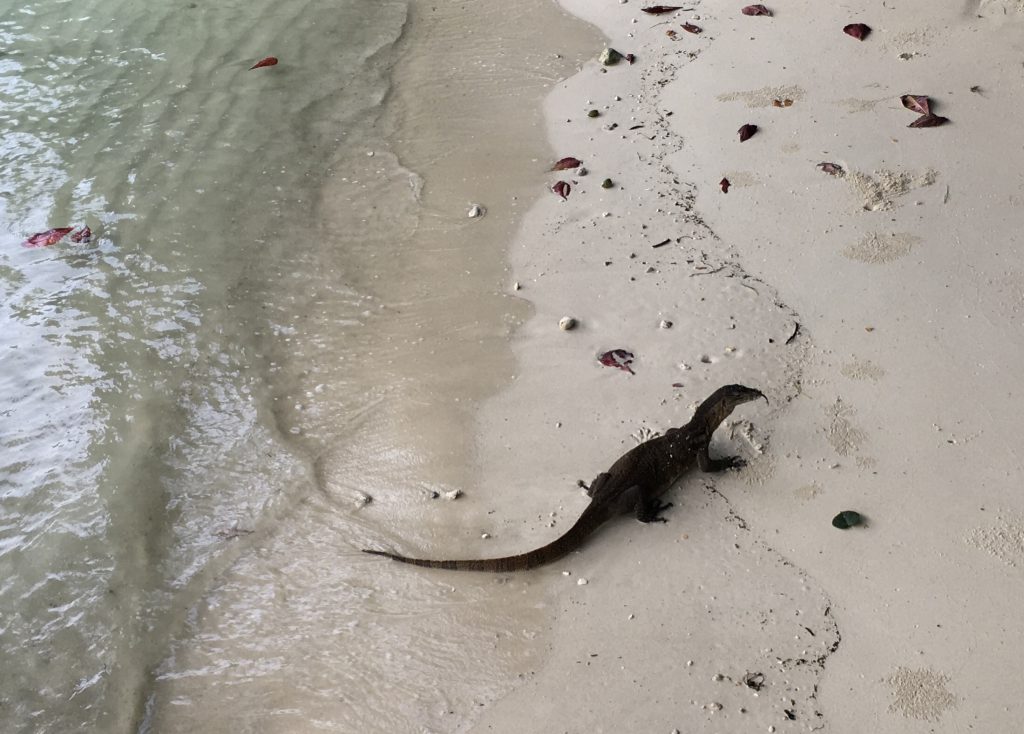 Then there are the wild boars, interlopers which swam from the mainland to this island. I guess someone told them la vie est belle on Pangkor Laut. Wild boars are a big problem here because they cause a lot of damage leading to soil erosion. We spotted three of them running and grunting near Chapman’s Bar in Emerald Bay.

Whilst the Long-tailed Macaque (Macaca fascicularis) are demanding and greedy they can be kept at a distance by simply not feeding them. As Aris, the island’s resident ranger-naturalist-conservationist explained on our jungle walk: if you feed monkeys regularly without any effort on their part, they will become lazy, entitled and even more greedy. In some places where they have been fed by humans e.g. Batu Caves, they have turned mad, snatching people’s handbags and attacking visitors when food is not handed out. 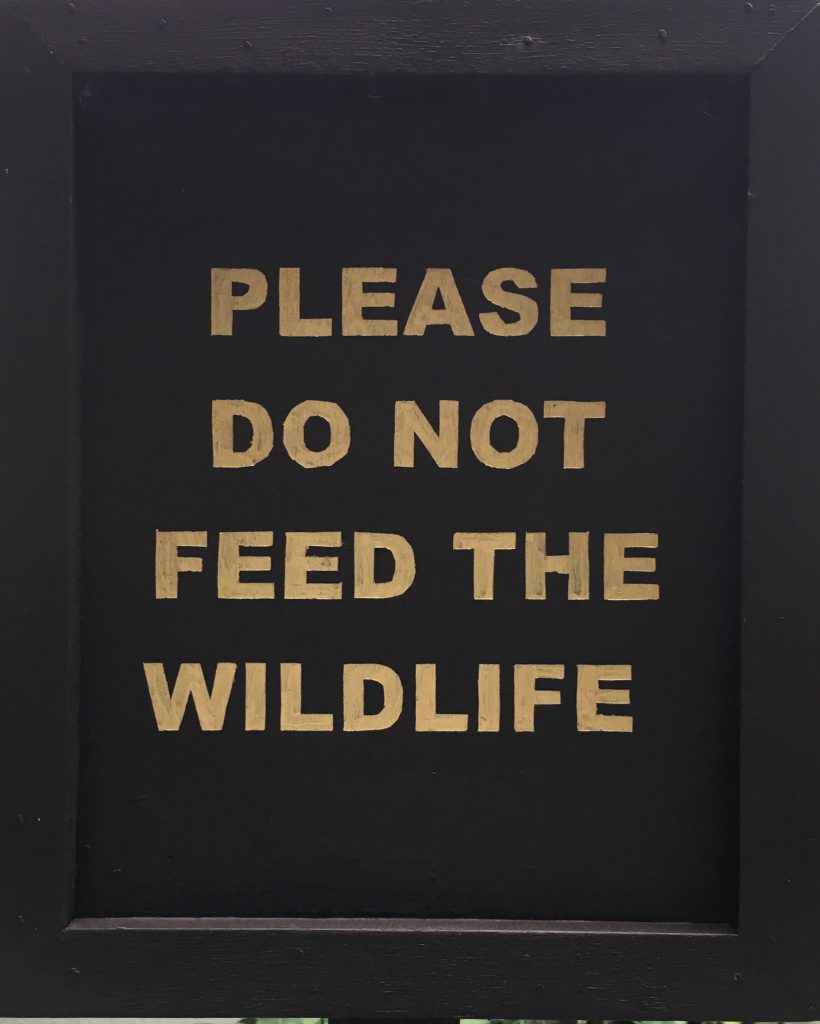 I did not want to say out loud, but really, monkeys are like human beings in this respect. Unfortunately some human monkeys make it to the top along the same principles, by not working but by stealing what belongs to other people.

Wild boars, on the other hand, can’t be stopped. Their numbers increase rapidly in short periods of time and the solution here is to have them culled. This upset one island guest who helpfully suggested a humane alternative to shooting, which is to bring in some tigers to eat the wild boars.

It had not occurred to her that not only would it be impossible to find tigers but that the tigers might be more interested in eating hotel guests than in eating the wild boars!

One novel project started on the island which has been very successful is their hornbill protection and breeding programme. There are sizeable numbers of Oriental Pied Hornbills (Anthracoceros albirostris) here and the females are encouraged to nest in one of six specially crafted boxes. Once in the box they seal themselves in to hatch the eggs, leaving only a small slit for the males to bring them food.

One of the resort’s Oriental Pied Hornbills, seen near the entrance to the Sea Villas, bringing a berry to its mate which is nesting in a box 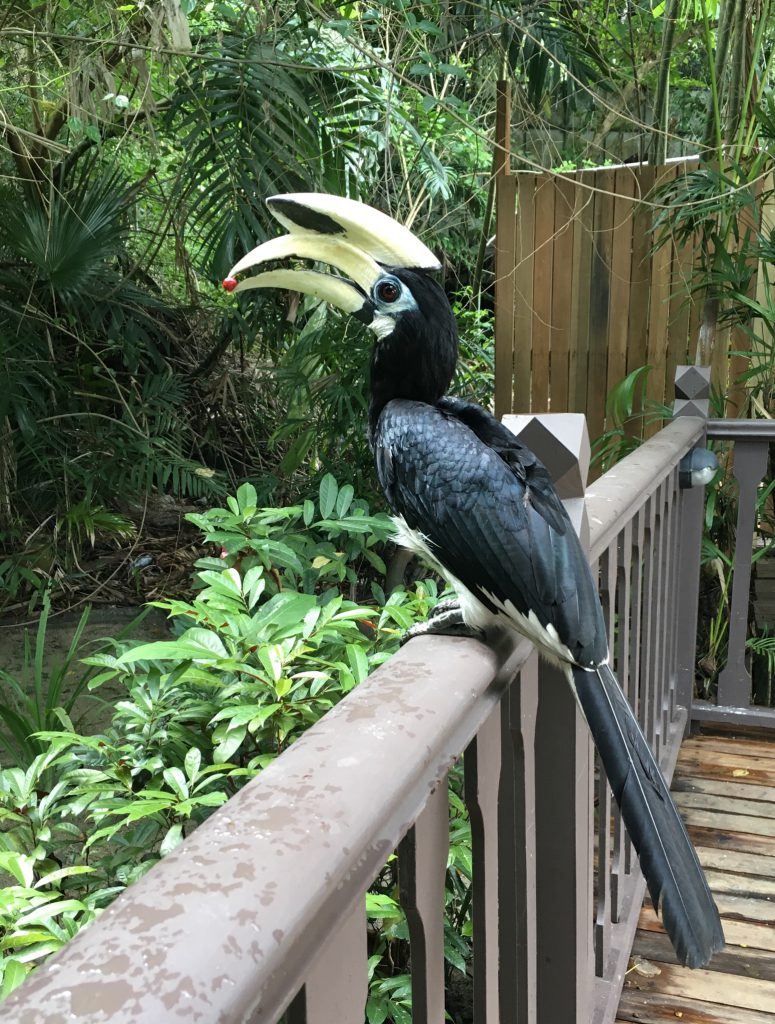 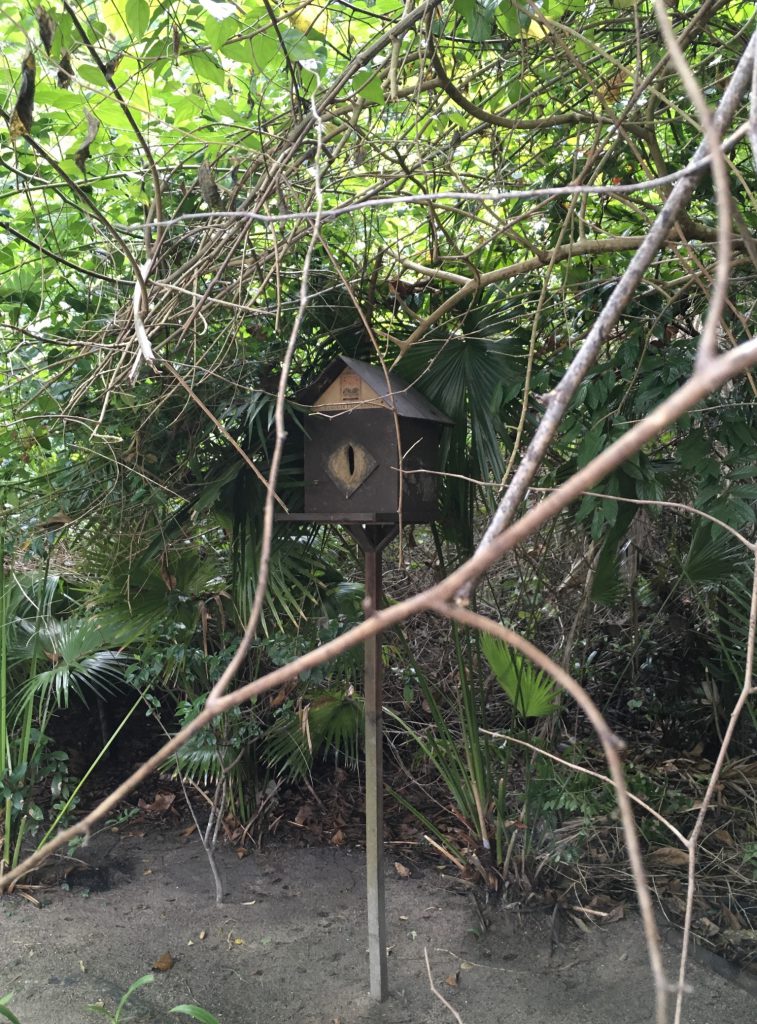 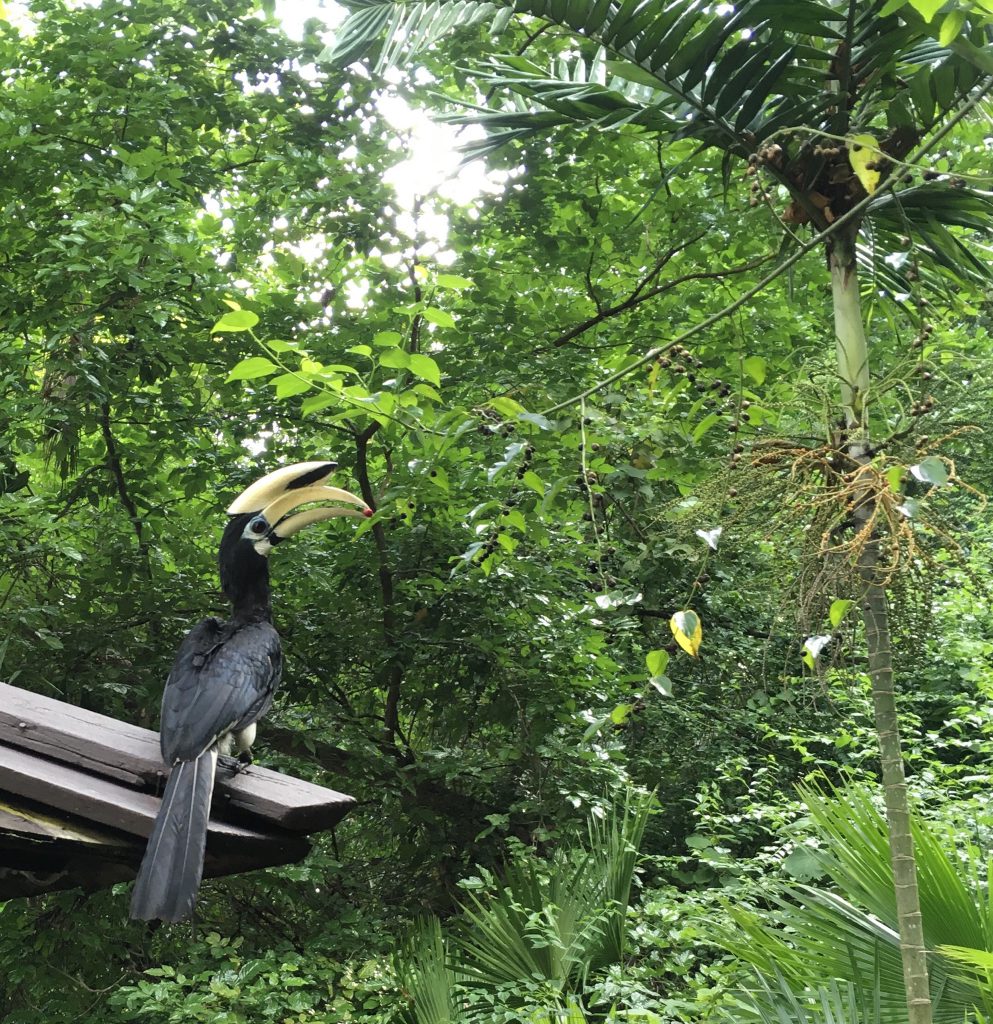 Another nesting box near the Hornbill Cafe, from where the nature trek starts 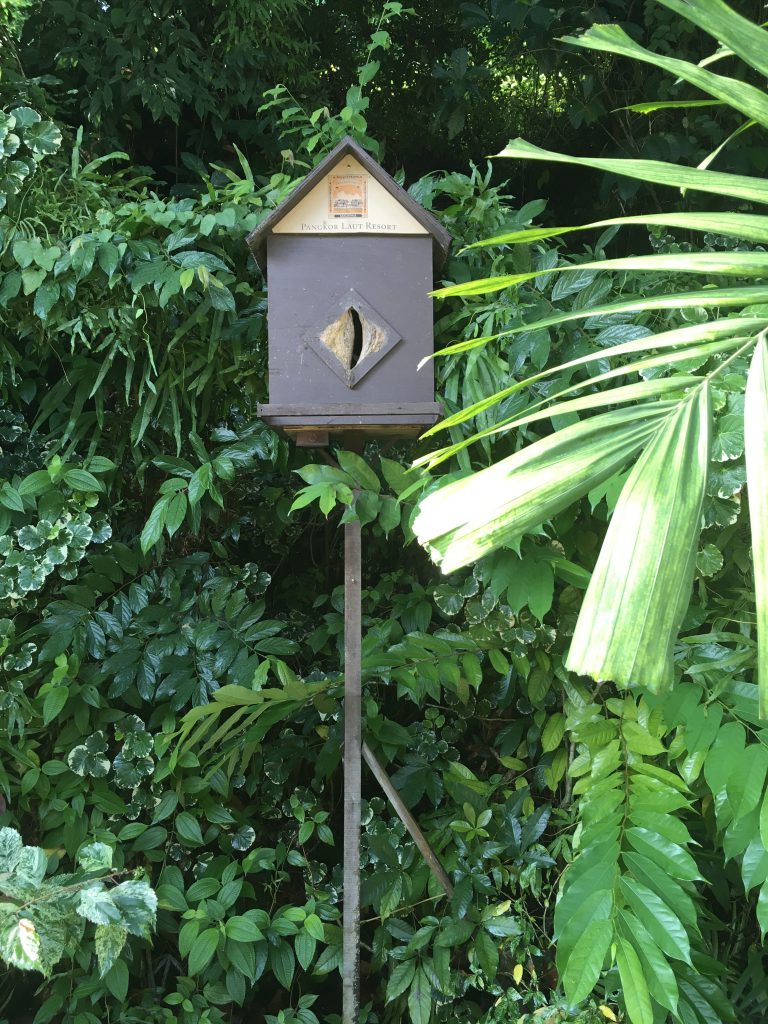 Hornbills are to be admired as they mate for life. One problem affecting their life span is that they steal food left on plates after the hotel guests have left and this leads to them dying earlier.

I wondered if the reverse were true, that if we humans ate bird food (fruit, seeds  and nuts) we would not thrive. But I think we would be alright, such is the wonder of our digestive system.

A hornbill in the Royal Bay Beach Club, spotted on our first day whilst having lunch 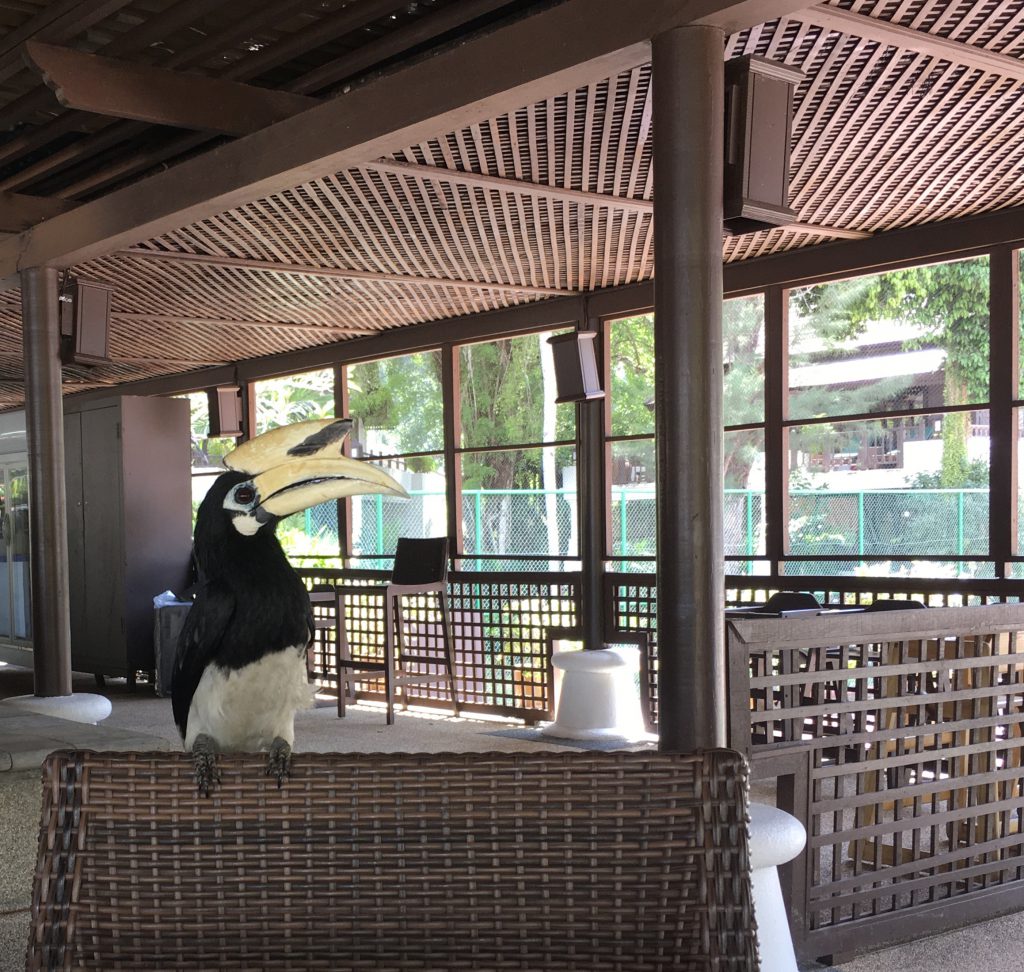 Hornbills hiding in the frangipani trees by the pool, looking for food…spot the one with a french fry in its beak 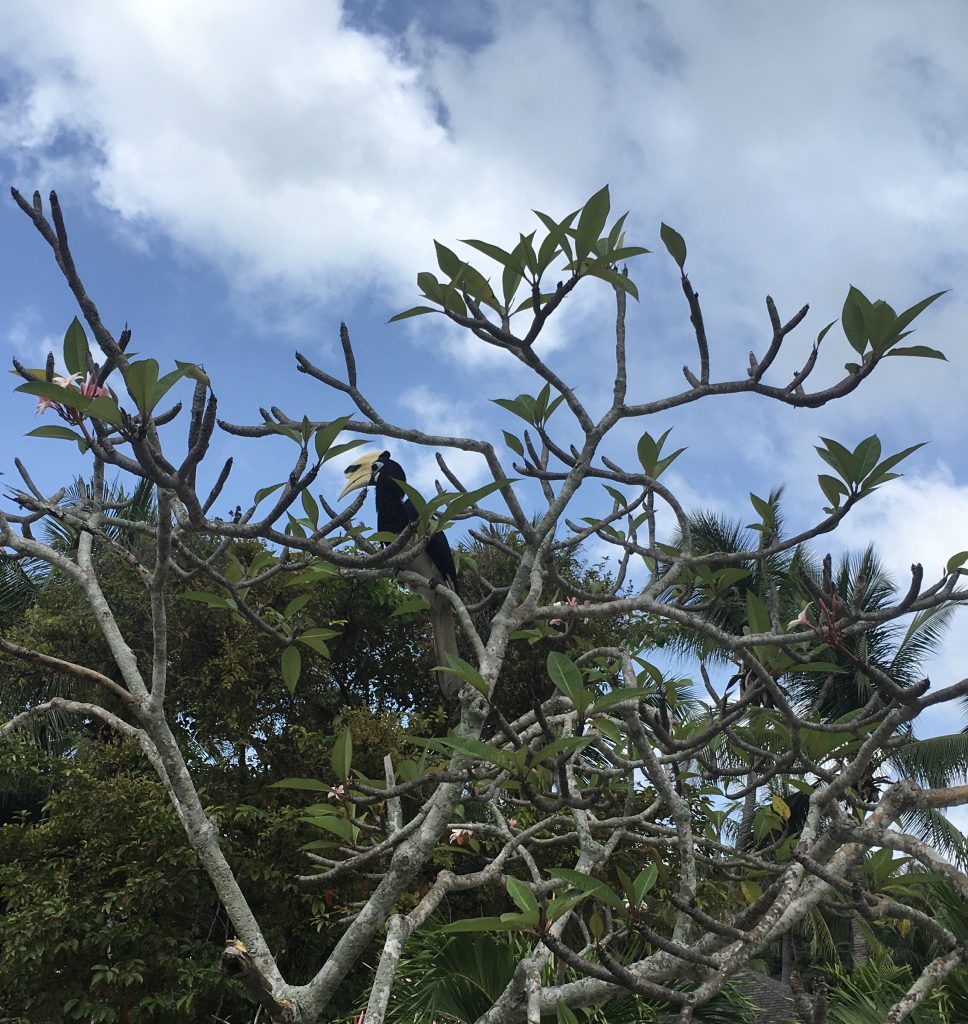 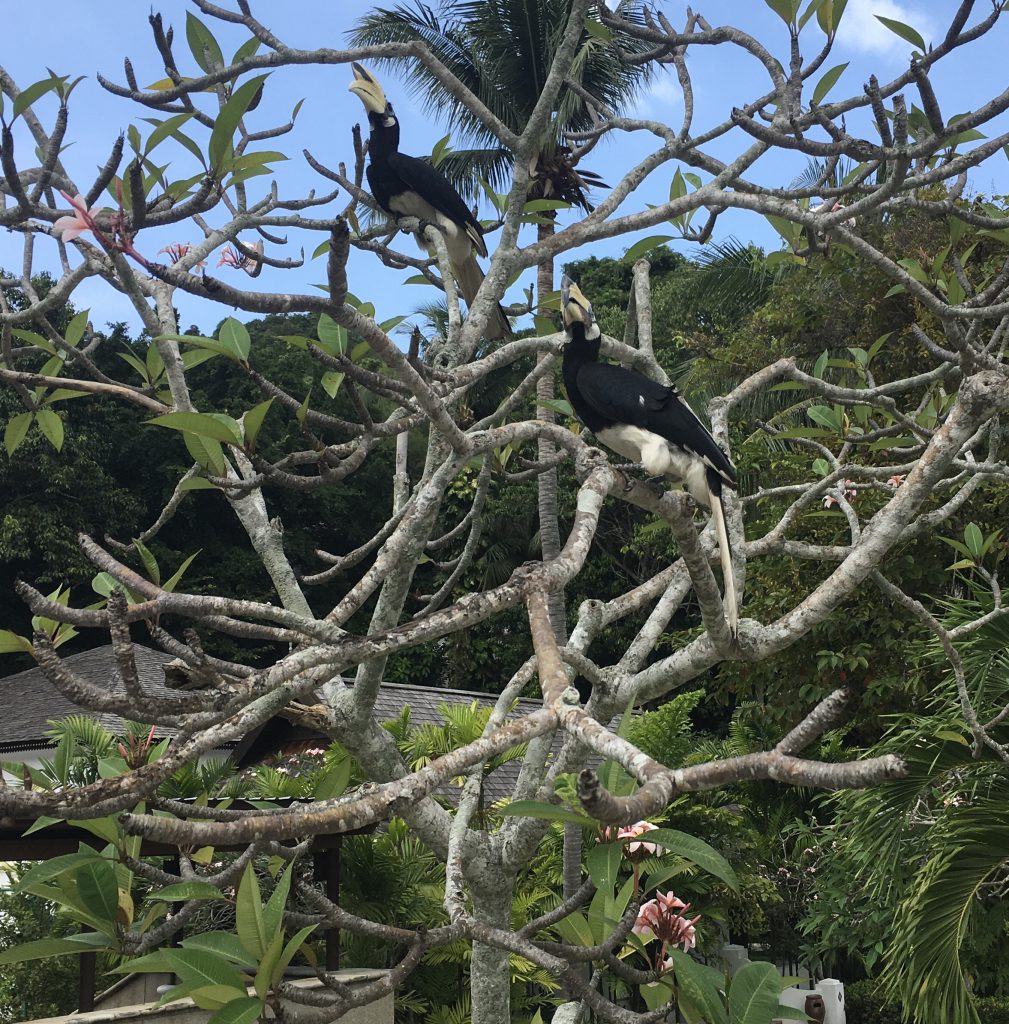 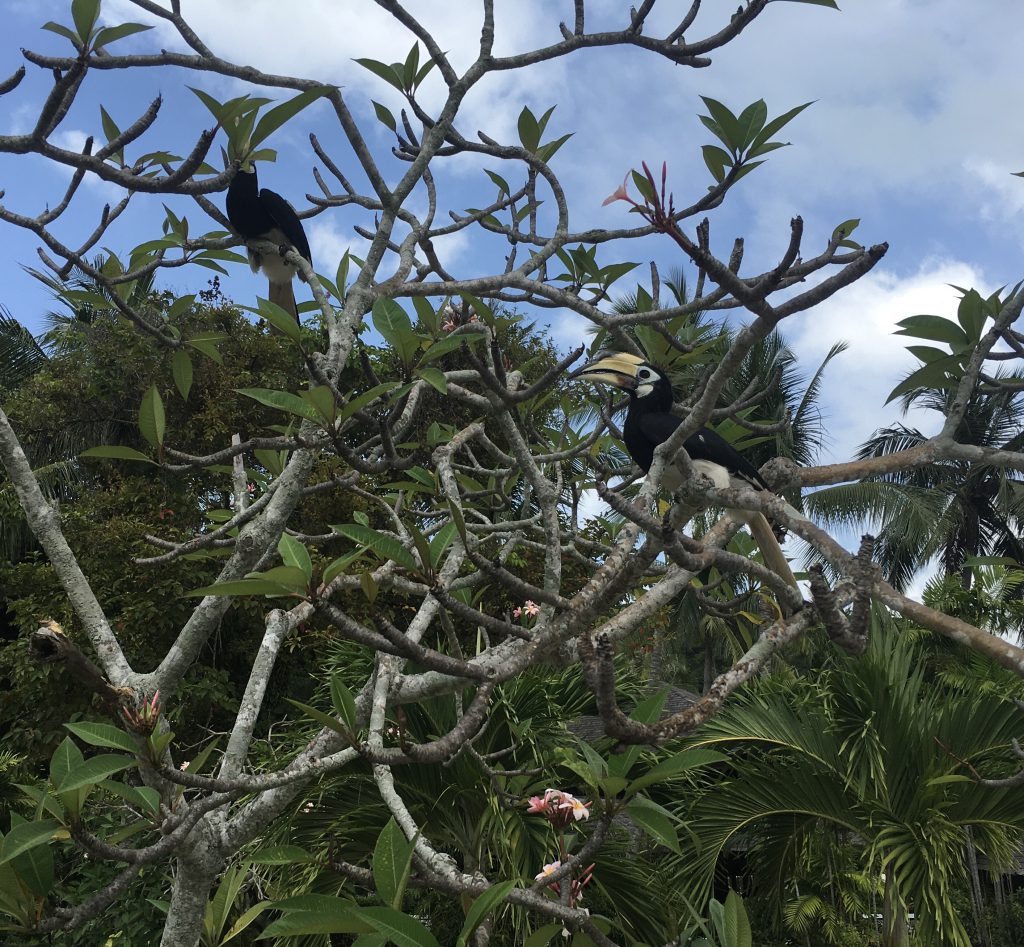 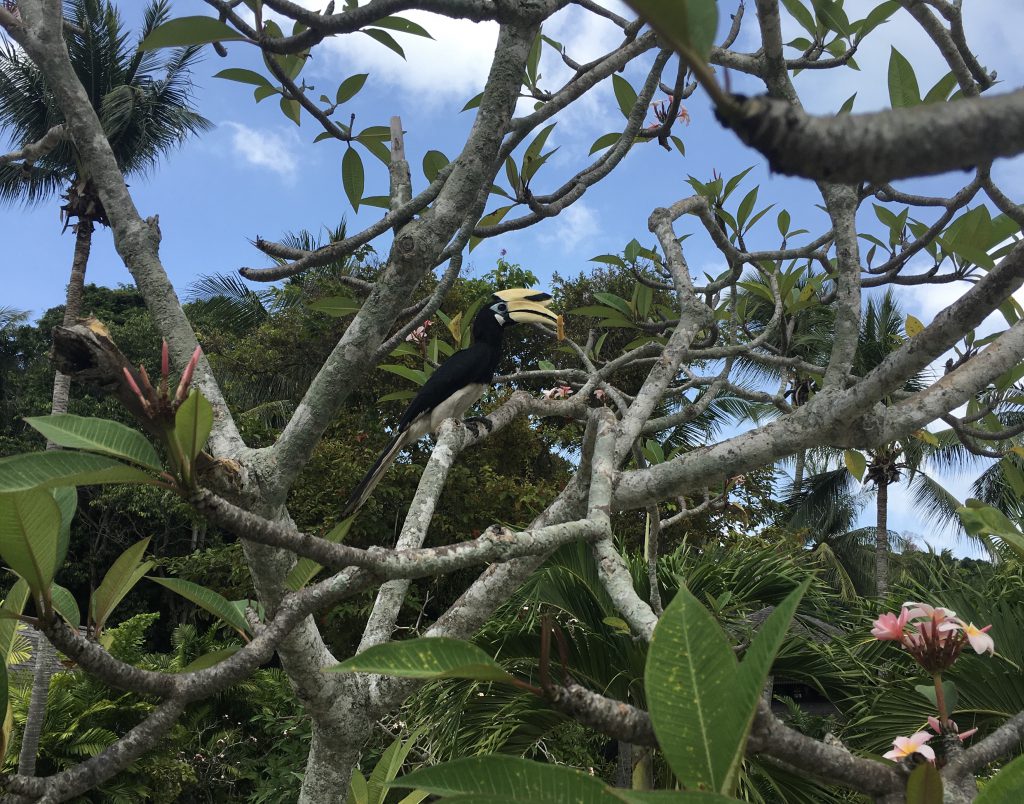 One animal you can hear screeching and flying about at night is the Island Flying Fox (Pteropus Hypomelanus) which is a type of fruit-eating bat. It sleeps during the day and forages for food at night.

Now, this bat can teach us humans a thing or two about sleeping well. It is highly sensitive to noise disturbance and can be found hanging upside down on only one Sea Almond tree (Terminalia catappa) on the island. There are other sea almond trees on our side of the resort but the other three trees we spotted are near noisy areas i.e. next to the swimming pool, a restaurant and a shuttle bus stop. In order to get their beauty rest they just sleep in the one quiet tree by a quiet path overlooking the beach. Count me in…

Spot the bats hanging upside down, very much looking like fruits on a tree 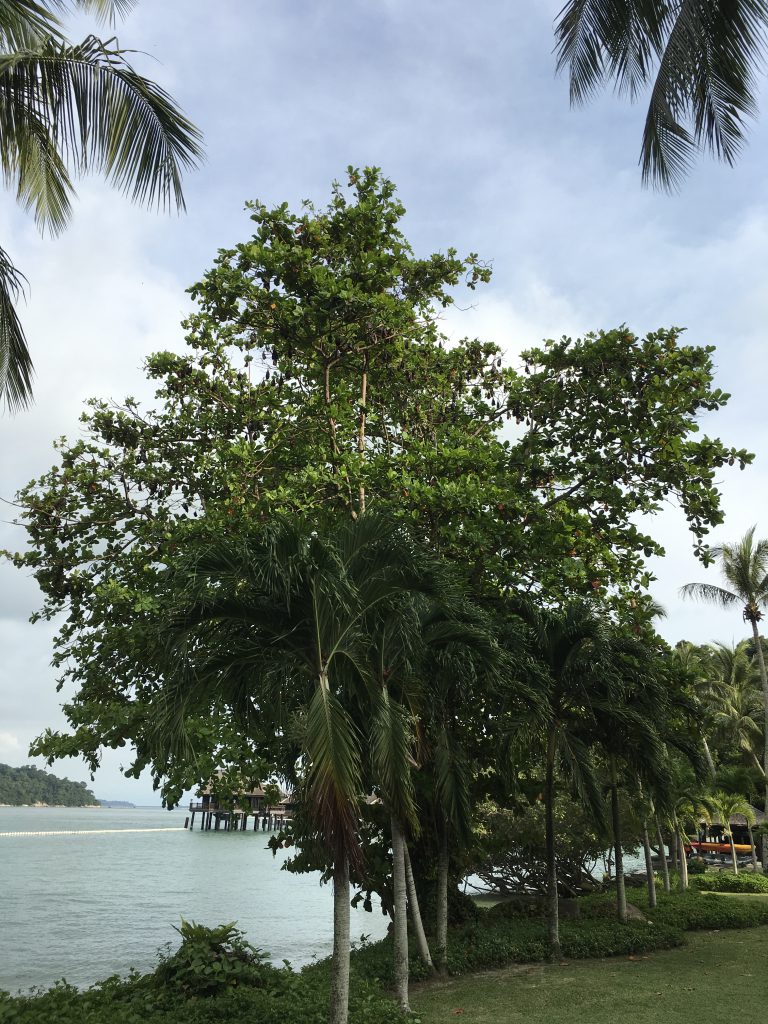 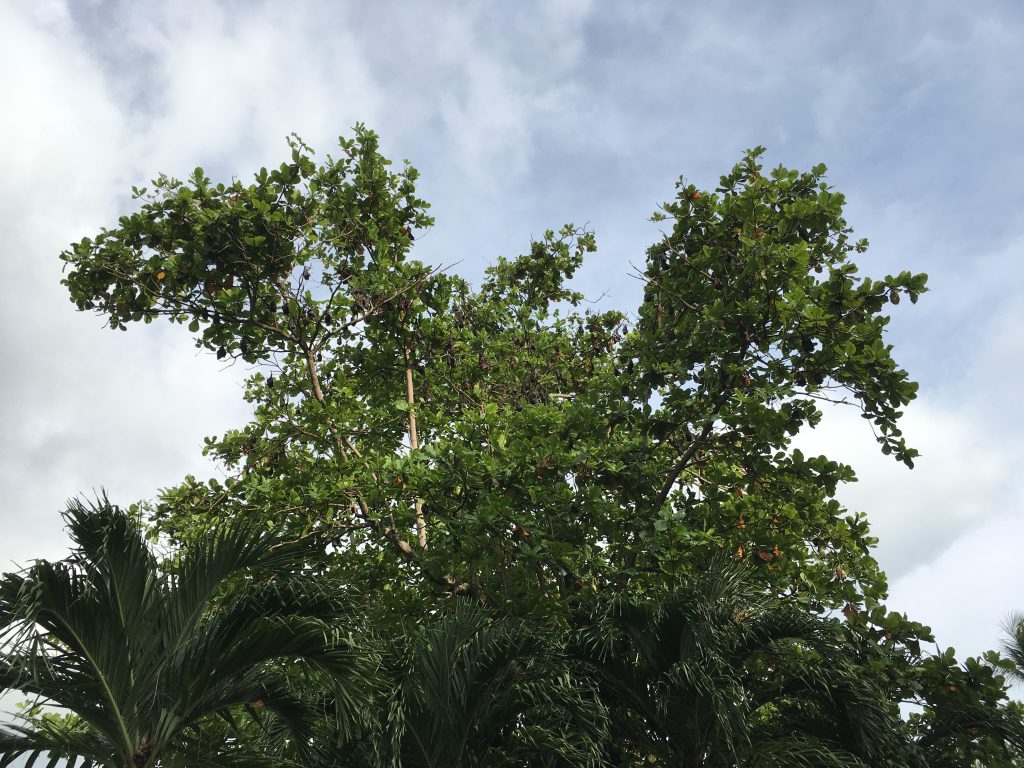 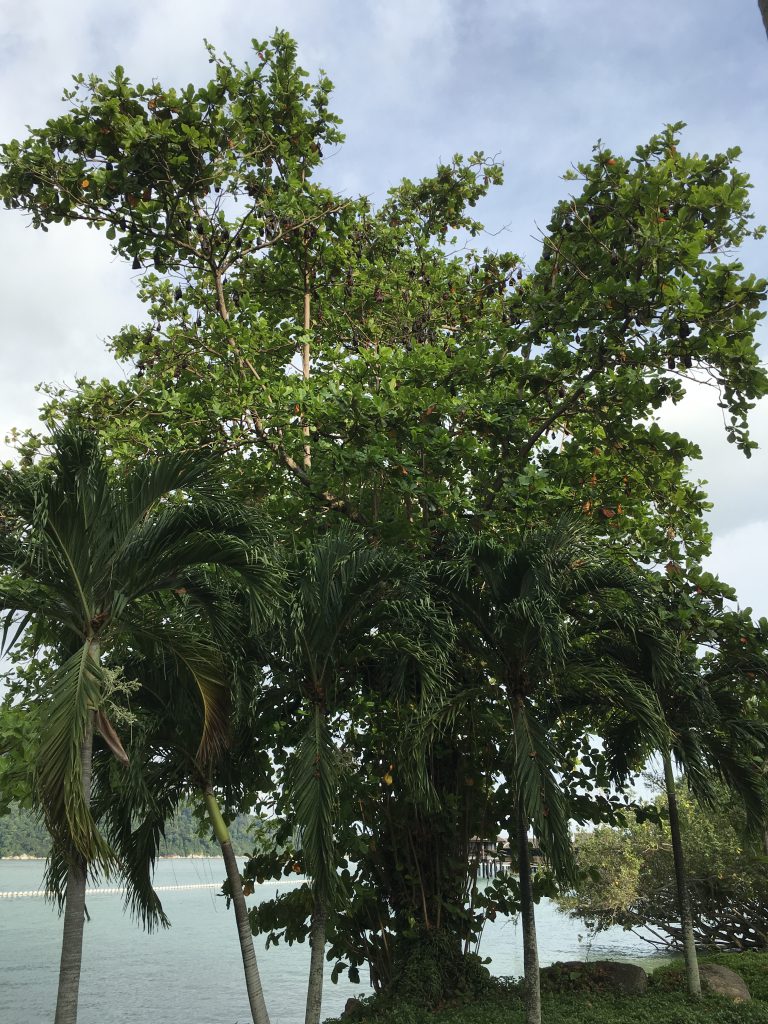 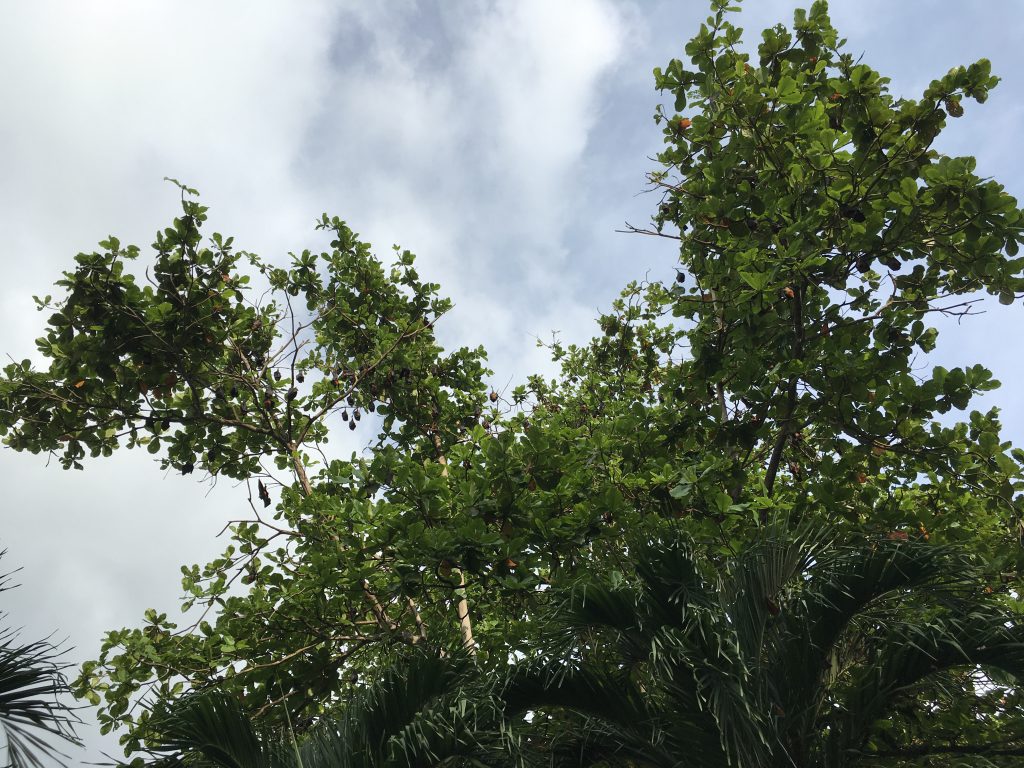 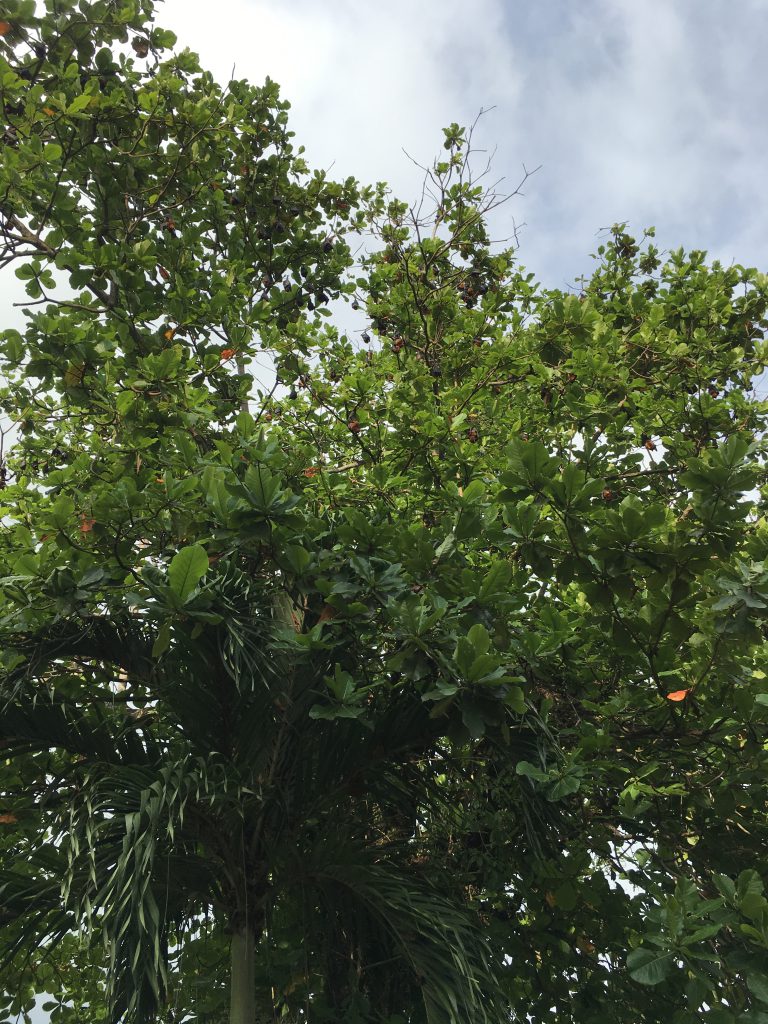 The Island Flying Foxes eat just the skin of the sea almond fruit, leaving behind the seed which contains an edible nut which I guess can be used like a regular almond 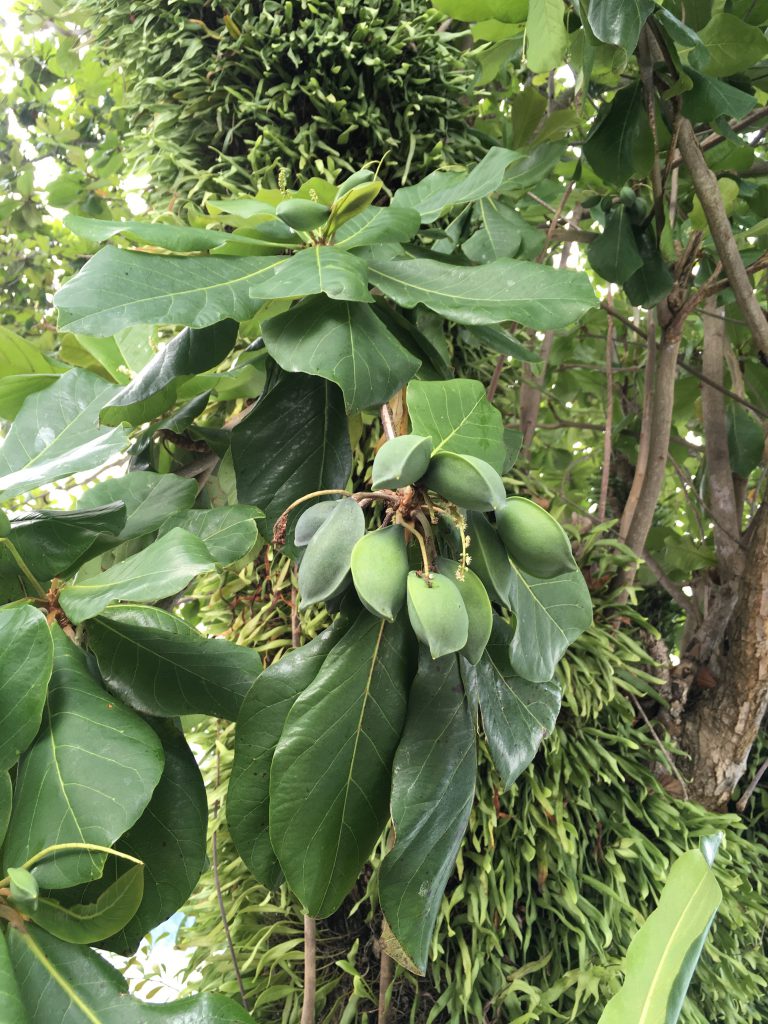 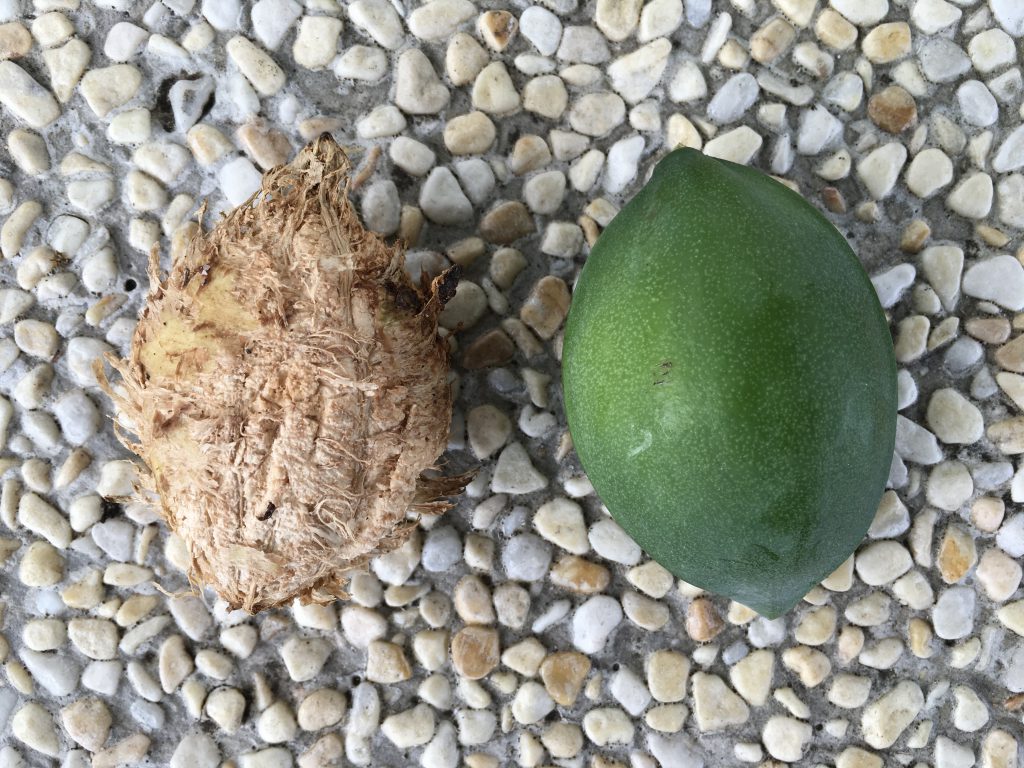 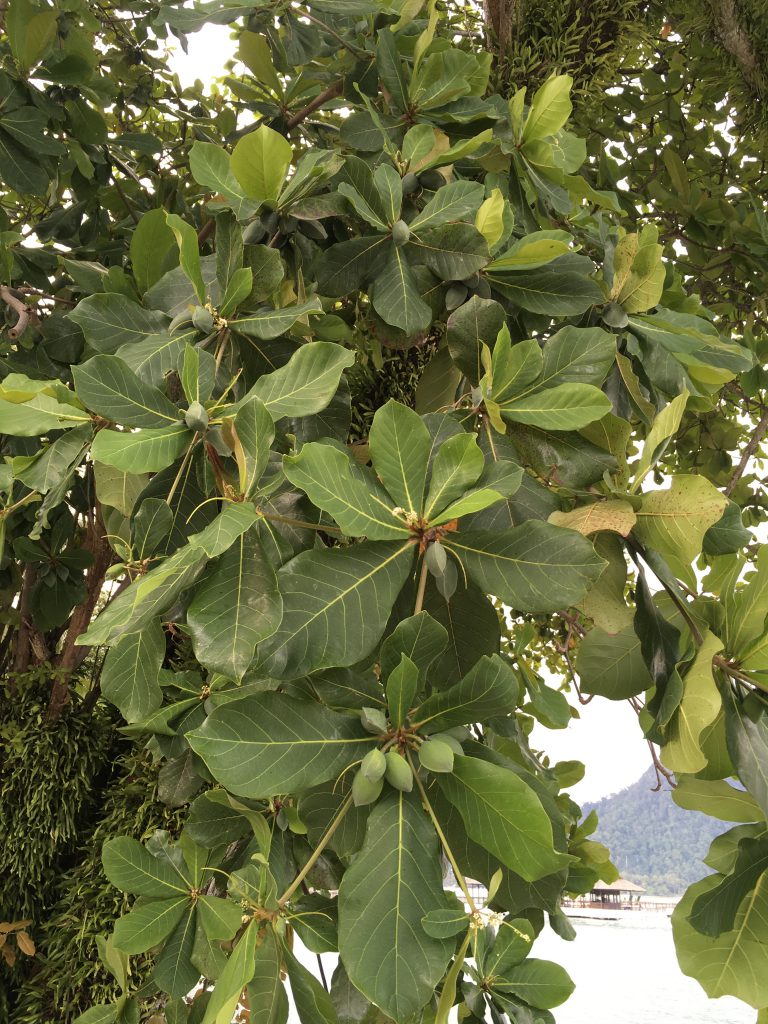 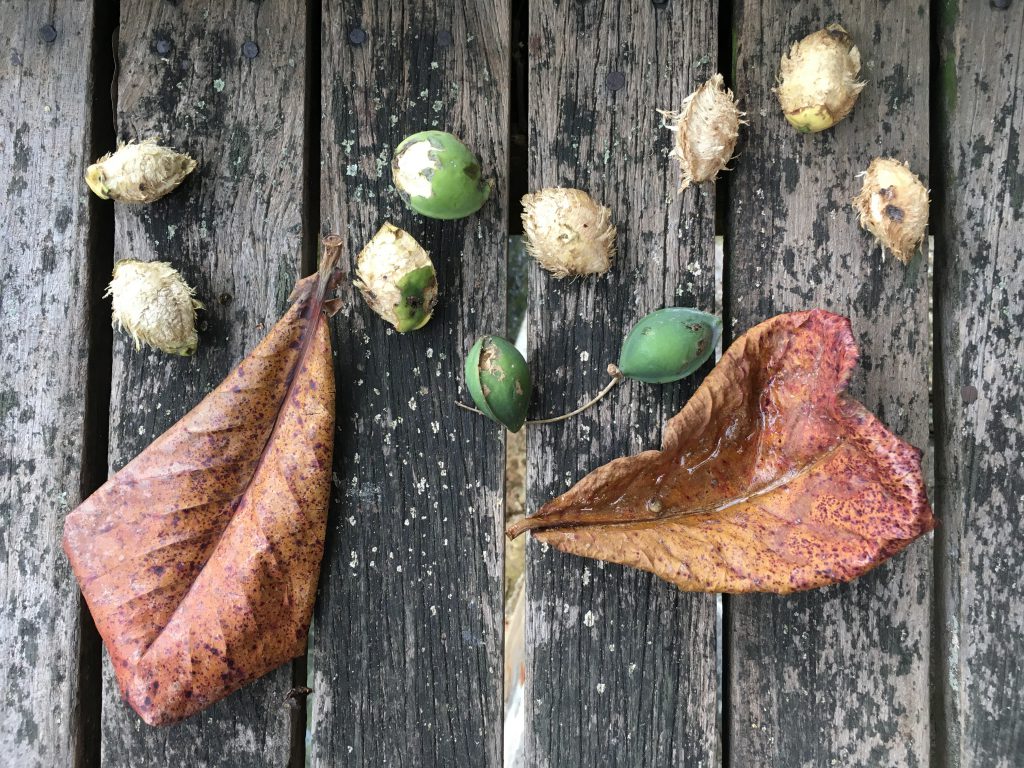 We are about to board our flight back to London and we must not be late. The next post will give an overall picture of Pangkor Laut Resort and Island.