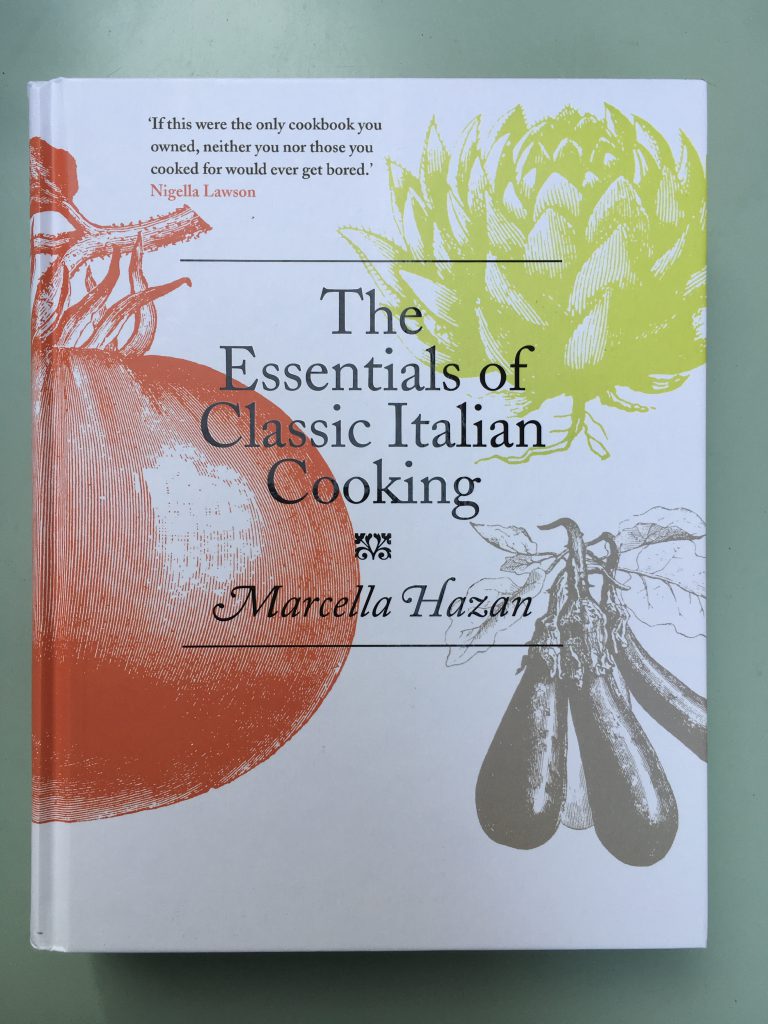 I have always known that Marcella Hazan’s Bolognese Sauce is the one most chefs aspire to. I first tried it nearly 30 years ago when Investment Banker Friend and his dear wife Shoe Lady, just newly married, came on a visit to London. SL and I sent the men out for a long walk so we could be left alone in the kitchen. We set the pan on the flame, chopped up some vegetables, heated the meat through, added a lot of wine and pulped tomato and then waited a long time for the sauce to cook down.

Such a long time that we could hand-make some tagliatelle, and the tagliatelle had time to dry in its coating of fine semolina, before being cooked in a large pot of boiling water (which, yes, also took a long time to come to the boil).

The point of writing all this down now is because in the the intervening years, I have not made the sauce at all. Instead, I continually made Antonio Carluccio’s brilliant Italian meatloaf in tomato sauce, which also sometimes doubled up as meatballs in tomato sauce. Without the tomato sauce, I sometimes make it into burgers, such is the versatility of the meatloaf mix.

I really did want to revisit Ms Hazan’s recipe but lost heart when I read the original recipe reprinted here in the New York Times. It was not only the non-metric measurements but the commitment of letting the milk and wine simmer to nothing before adding the tomatoes which then needed to be simmered for another three hours.

At the start of the lockdown here in London I said I would learn how to make croissants and baguettes, but I have done neither. I guess making this sauce is a way of challenging myself to make something more complicated than cake and bread.

When it comes to cooking I prefer not to cook small portions as the effort is the same whether you cook for two or 12. I have therefore tripled the recipe, weighed out the cup ingredients to give approximate metric equivalents, and added some fresh herbs from my garden. Otherwise the method of cooking is the same. The length of time the sauce takes to cook is longer but thinking about it positively, such a long cooking time also allows us to fit in cleaning the kitchen or making a dessert while the sauce is simmering away.

The basics in addition to minced beef and pork: onion, celery, carrot and tinned tomatoes 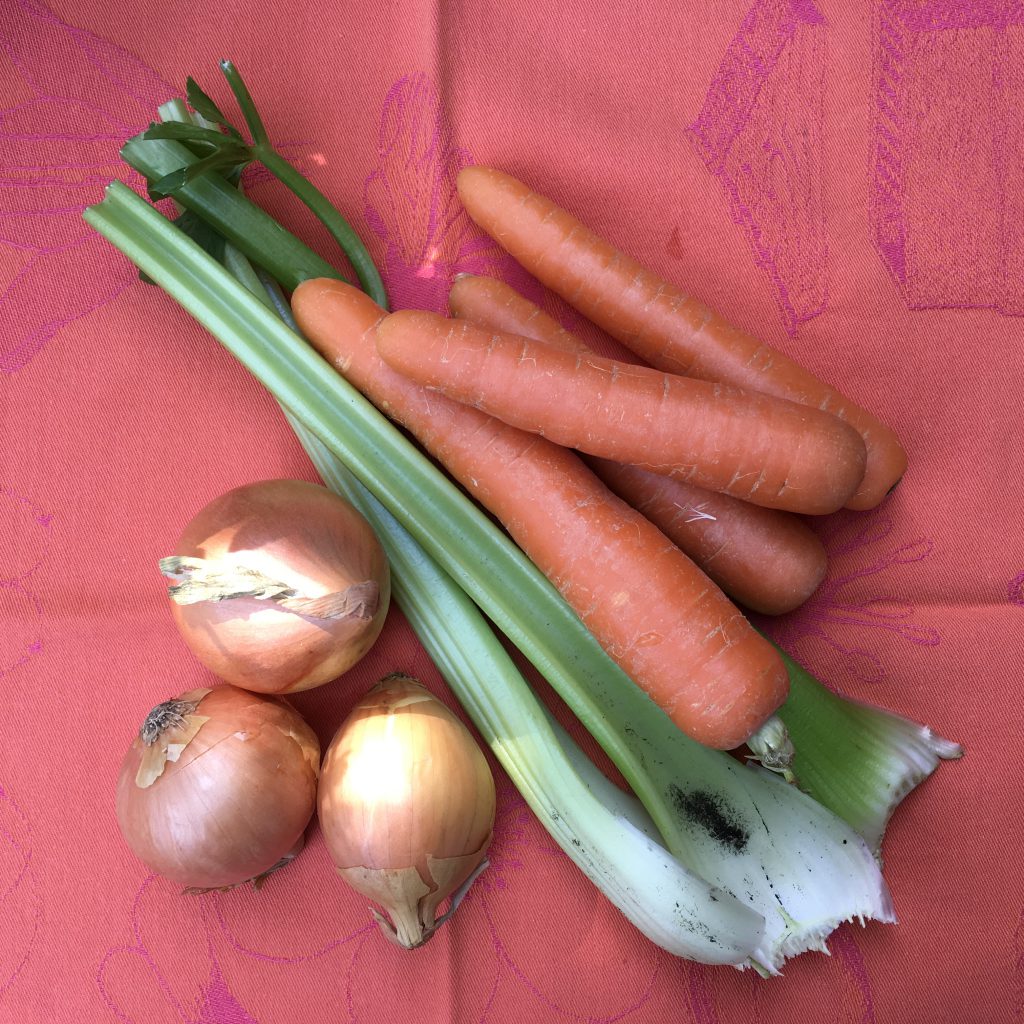 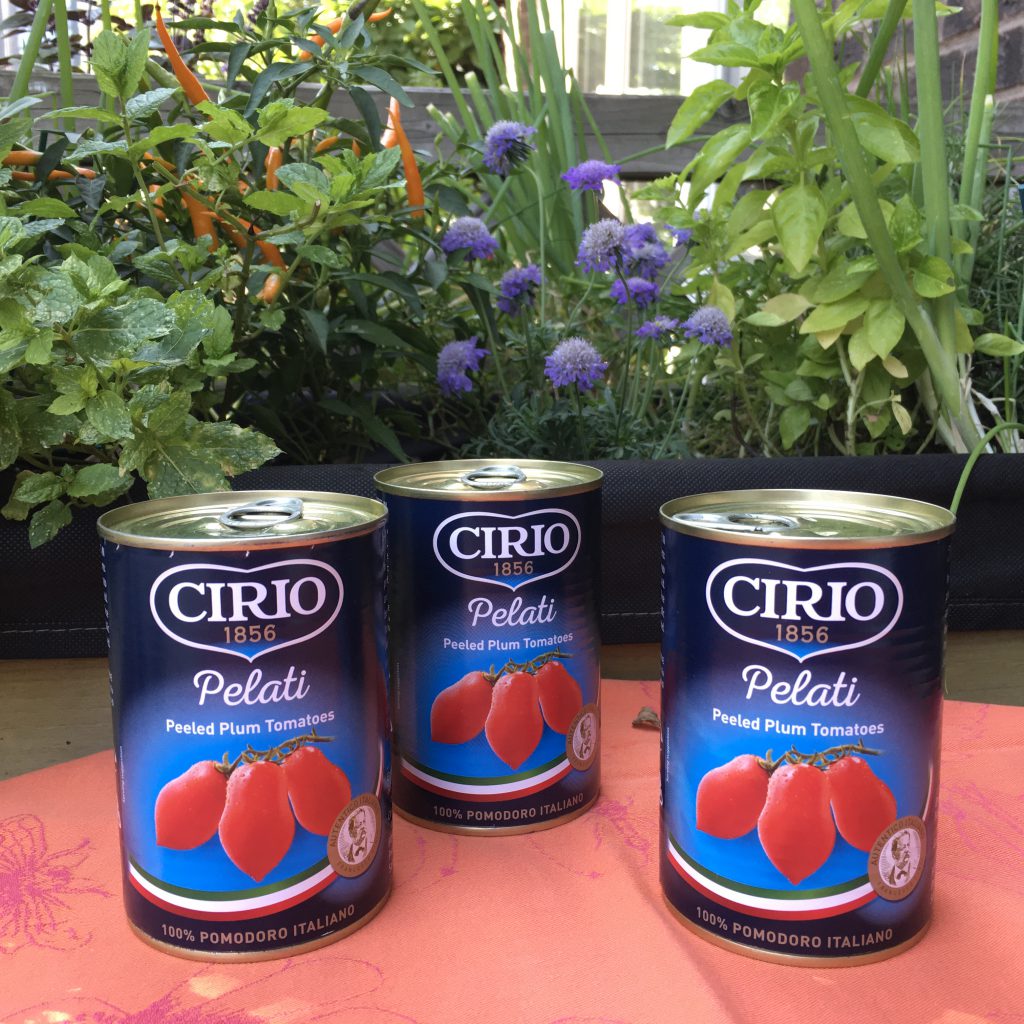 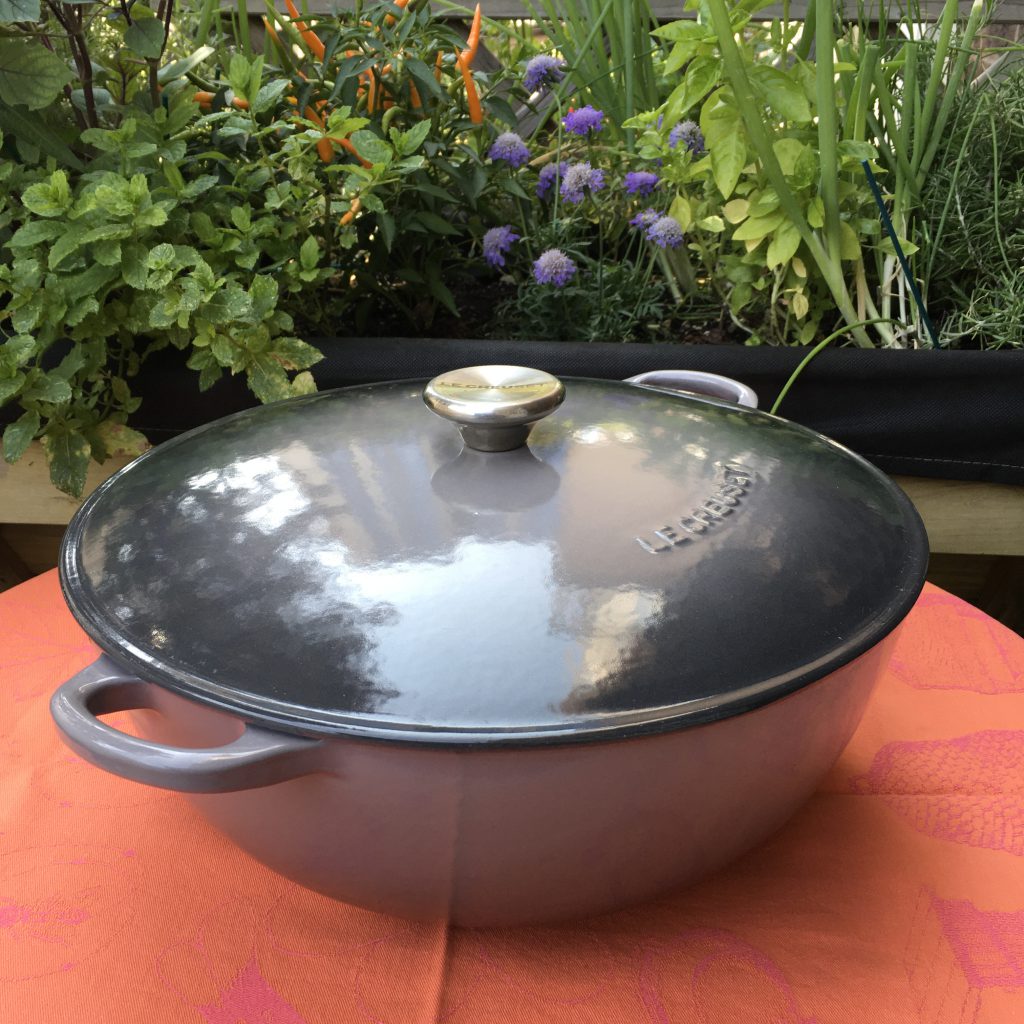 The only change I made to the recipe was to add some oregano, thyme, rosemary and bay leaves from my garden 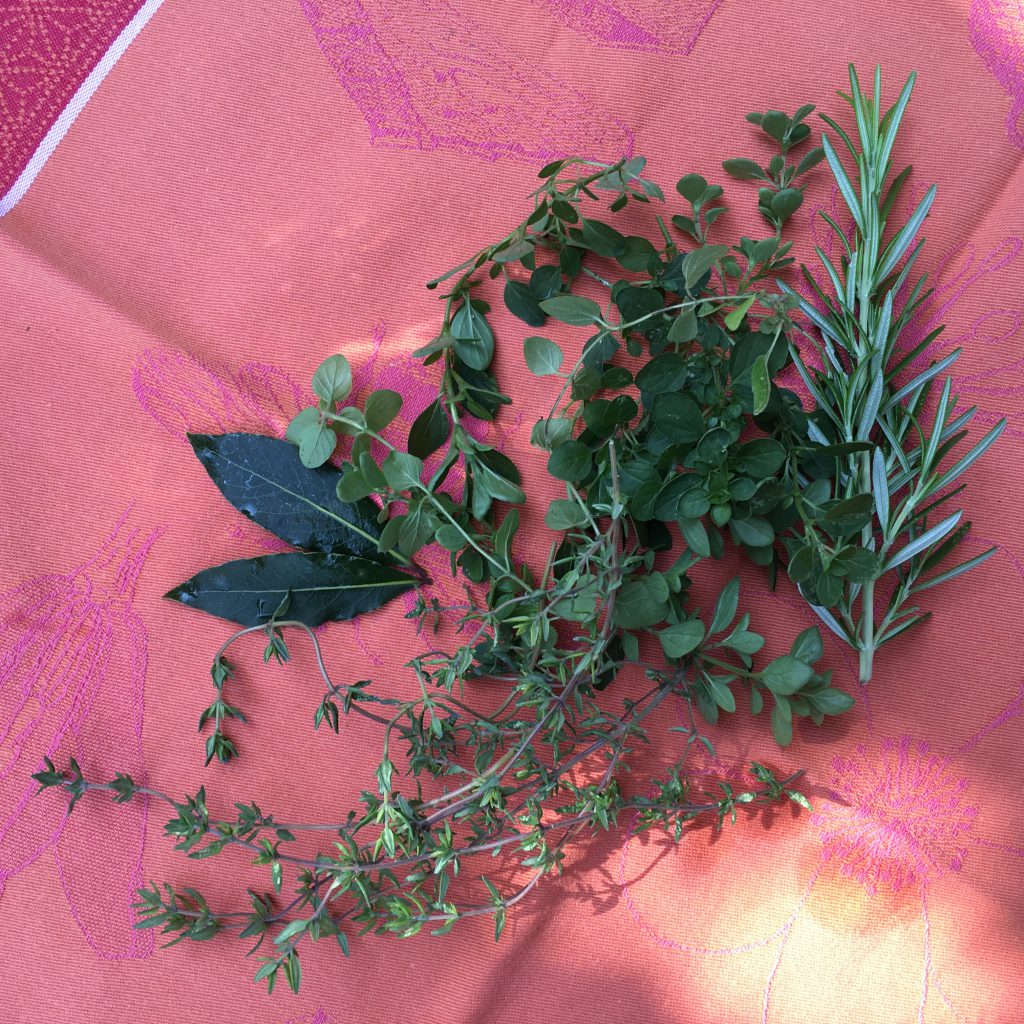 Freshly ground black pepper, around 20 turns of the mill

Place the oil, butter and chopped onion in a large pot. I used a cast iron Le Creuset pot. Cook the onion over a medium heat until it becomes translucent.

Add the celery and carrot. Cook for about around 4 minutes, stirring the vegetables to coat them well.

Add the minced beef and pork, salt and pepper. Using a large flat wooden spatula, break up the meat and stir well into the vegetables. The meat will not brown and you just cook it to the stage that it is no longer raw.

Add the milk, give everything a stir and let it simmer gently until the liquid has evaporated completely. For this amount of meat, it took around 40 minutes.

Give the sauce a stir and add the wine. Let it simmer gently until the liquid has evaporated completely. This took around 40 minutes.

Add the tomatoes and stir thoroughly to coat all ingredients well. When the surface of the sauce begin to form bubbles, turn the heat down.

Allow the sauce to cook in the pot, uncovered, at a minimum simmer for around three hours. I kept mine in this state for 3½ hours.

Give the sauce a good stir after one hour, using a silicone spatula to scrape the bottom of the pan in case there are any bits catching. Repeat this after the second hour.

In the final hour or so, give the sauce a stir every 15 – 20 minutes. The aim is to end up with a rich but dry sauce, with the fat separated from the sauce.

The sauce is now ready to be tossed into some cooked pasta, with nothing more than some freshly grated parmesan cheese.

The sauce took such a long time to cook that it was dark by the time it was ready, so here is a first photo taken under unflattering fluorescent kitchen lighting 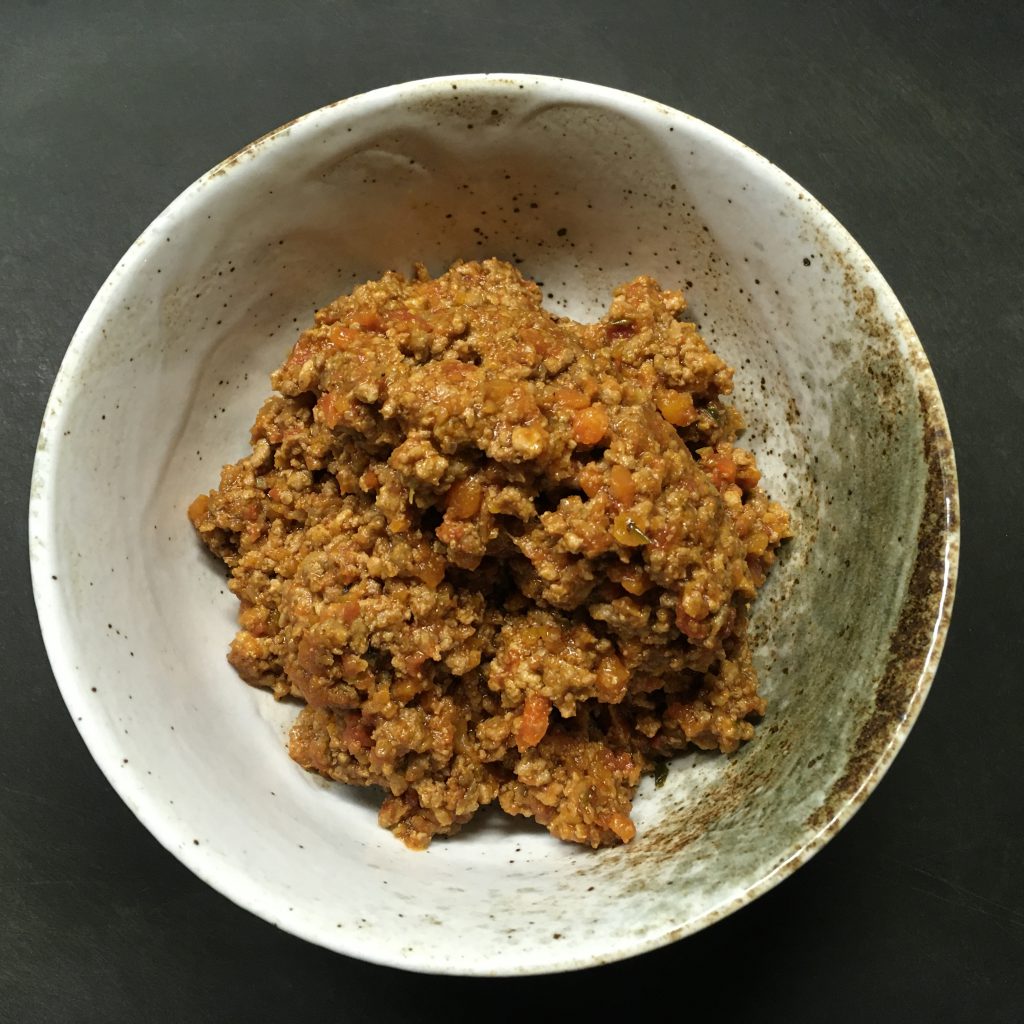 IBF and SL are now back in Singapore. This week I have the fun company of their son King’s College Boy. You know, it’s funny what you remember later in life. When SL and I offered this great dish to our husbands, they commented that our fresh pasta, the fruit of our hardworking Asian hands, tasted just like dried pasta (one of them said: I can’t tell the difference). But then I wonder whether we were so young then that our tastes were just not that sophisticated.

There are many versions of this classic sauce on the internet. In the end I decided to buy the book for myself, because the sauce was so rich, so tender and so full of savoury goodness that I thought I should really read the original recipe and its accompanying notes.

I should also write up the Carluccio meatloaf recipe, which is a favourite of our family. I might even make it next week for one of our dinners, if I do not get swayed to make Ms Hazan’s ragu again.