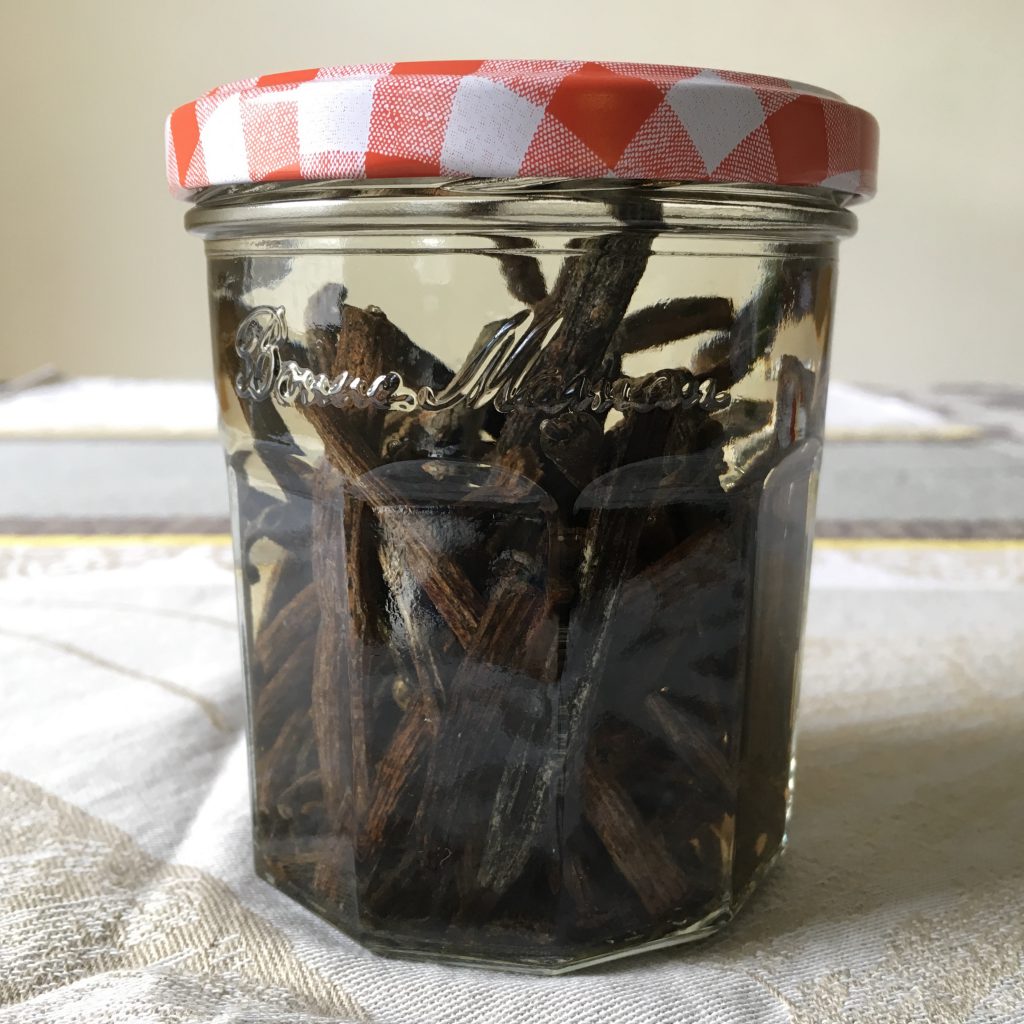 The theme of this post is Black and White, and it is really about opposites: colours, human nature and tastes.

Firstly, I had the opportunity to re-visit the Christian Dior exhibition at the Victoria and Albert Museum and here is a photo of the Bar suit that epitomised the New Look, which was what the press christened Mr Dior’s first haute couture collection launched in February 1947. This is the suit that launched a thousand black and white suits.

I used to have a running joke that given an endless supply of money my one luxury would be a dedicated car and driver, as I do not like getting stuck in traffic and more than that, I do not like turning up late. After this exhibition, I can safely say that my one luxury would be bespoke suits. I have had tailors (most people in the Fast East have personal tailors) but we are talking Maison Dior here.

Secondly, I am currently watching a Korean drama called 단, 하나의 사랑 Angel’s Last Mission: Love. Having lived in the West for more than half my life what I realise is that compared to the East, people here believe less in spirits but are more into spirituality (as opposed to having a faith in God). I once read an article that said that even in the recession the one thing people continued to buy in the High Street were Buddha statues.

Are ghosts and spirits real? Are angels real? Goblin and Master’s Sun give us an imaginative insight into this realm, as does Angel’s Last Mission. The Bible does not say much about ghosts and spirits (unless it is the Holy Spirit) but it has a lot to say about angels.

Much of Angel’s Last Mission is humorous, as when the cynical recovering ballerina Yeon-soo takes issue with the moral earnestness of the Angel Dan and says you are really strange…you must live in another world. Technically, this is true of course. Dan calls Yeon-soo a noisy gong when she shouts in a fit of temper, in reference to 1 Corinthians 13 v 1: If I speak in the tongues of men or angels, but do not have love, I am only a resounding gong or a clanging cymbal.

Humour aside, the drama has a very dark side which covers greed, hate, fear and murder. These are all the things that are the antithesis of being salt and light, which Christians are called to be in this world (it is clear that Dan is sent by the Christian God). To add intrigue, there is also another angel in the drama, and so I wonder if there is going to be this battle between a good angel and a bad angel.

Finally, I was in the bookstore recently when I picked up a book about how to use leftover scraps of food. I was not keen on re-purposing apple peel and squash seeds but there was a page on making your own vanilla extract from used vanilla pods. Doing a Google search, as one does, I found this article which has clear instructions and step-by-step photos.

At home, though, what I really wanted to do was to replace the vanilla pods in my sugar pot with fresh ones, and also to use up the soju I had stashed away. 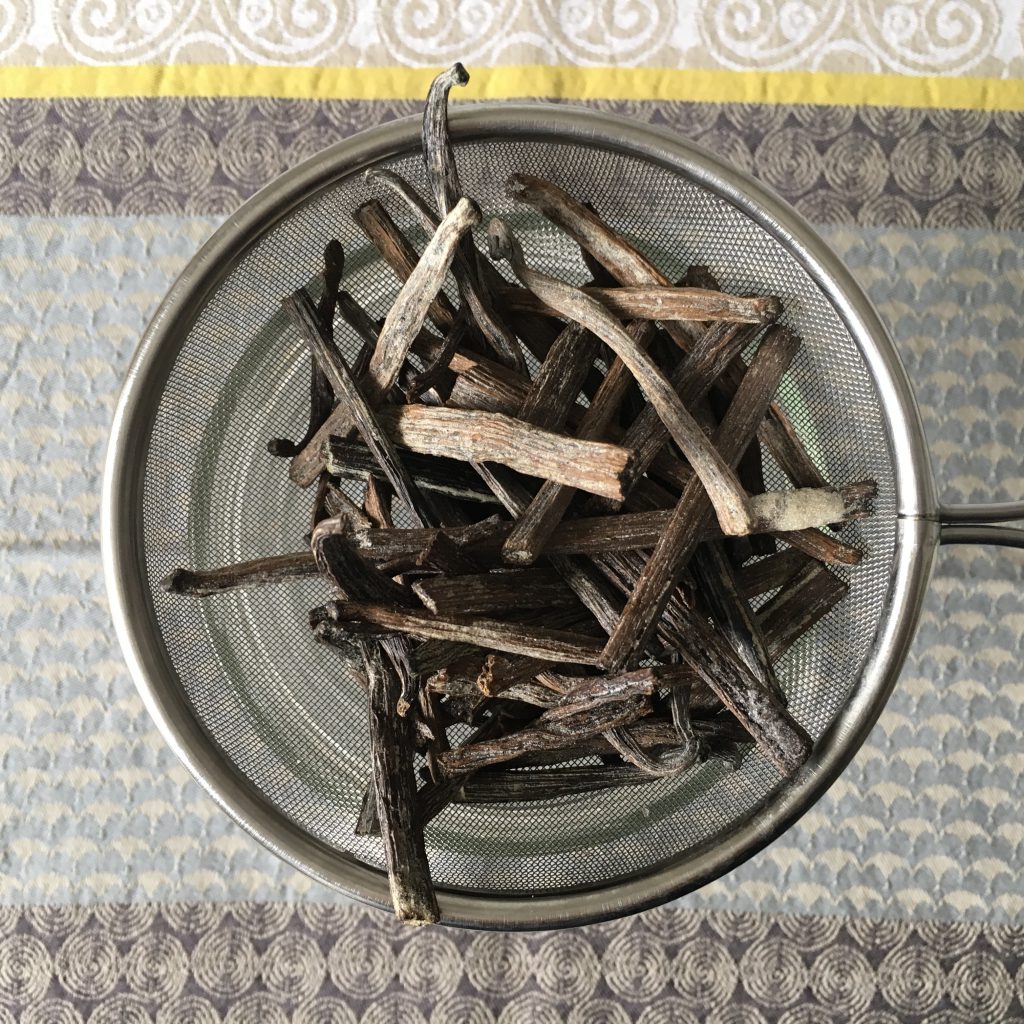 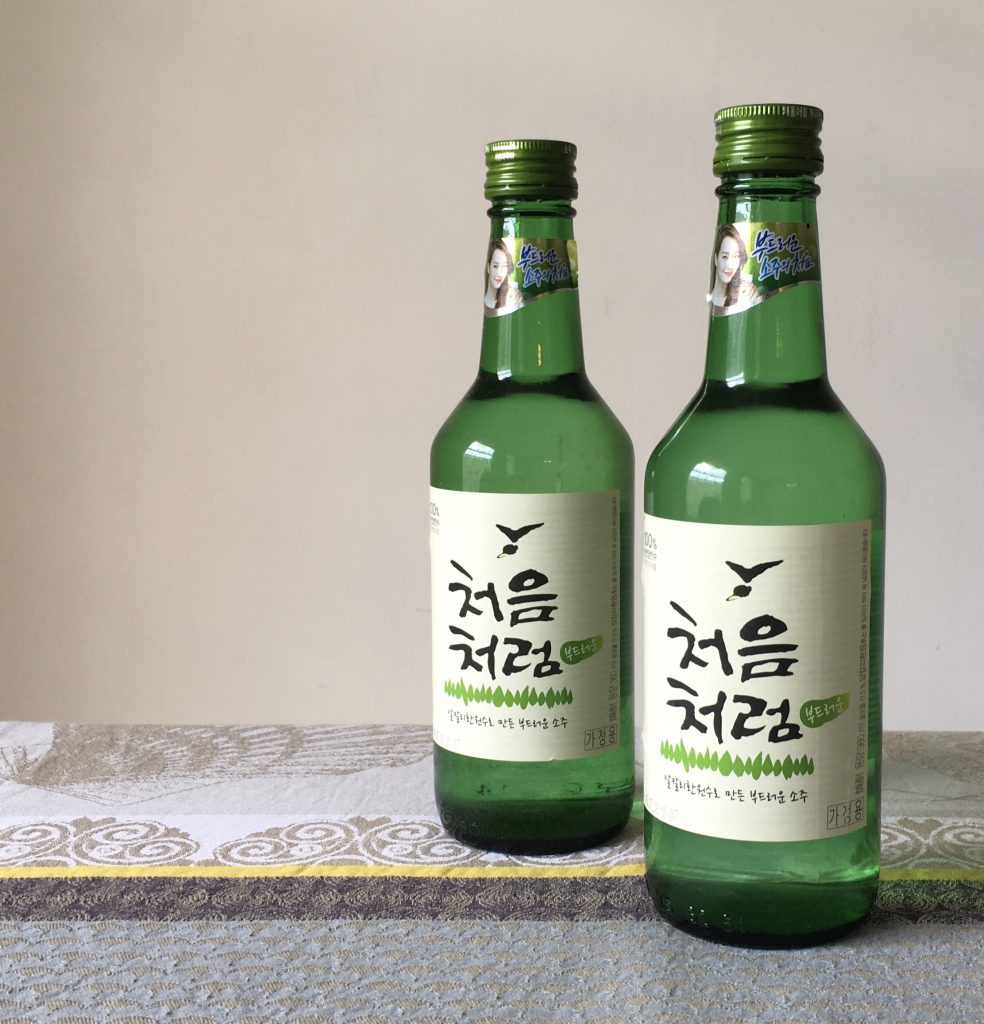 I said earlier the theme of this post is Black and White i.e. opposites. When we think of vanilla we imagine sweet and fragrant. When we think of soju we imagine bitter and harsh: all those Koreans you see in the dramas knocking back a shot then crumpling up their faces.

Most of us would have experienced a life filled with good and bad, ups and downs. Taken together it makes up a whole life and not a lop-sided one. This is what I hope the vanilla extract will be: sweet and bitter coming together to make a something palatable, perhaps even valued, after having had the time to settle down. 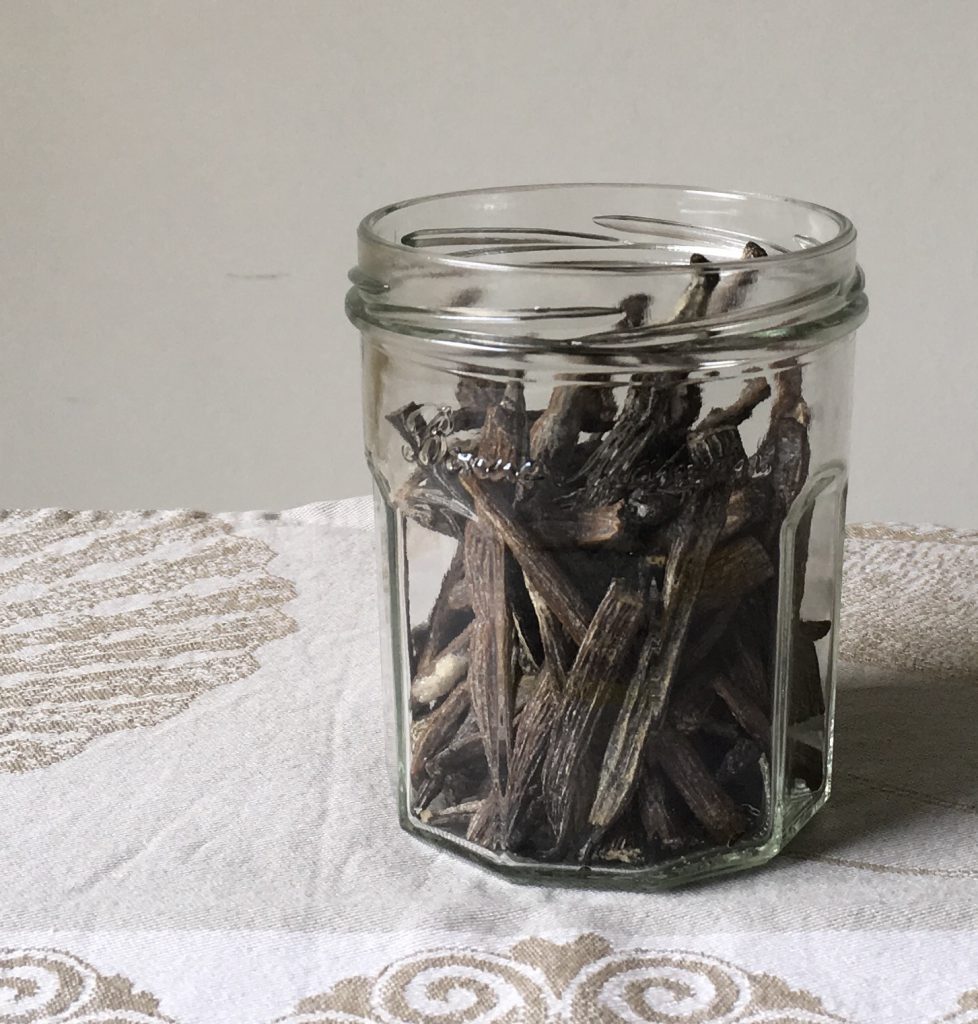 Simply placed the vanilla pods into a clean, sterlised jar and top up with the soju. This needs to age a little so I am keeping it in a dark place until Thanksgiving in late November. Maybe by then I can use some in a Pecan Pie…what ambition, but I will give it my best (vanilla soju) shot. 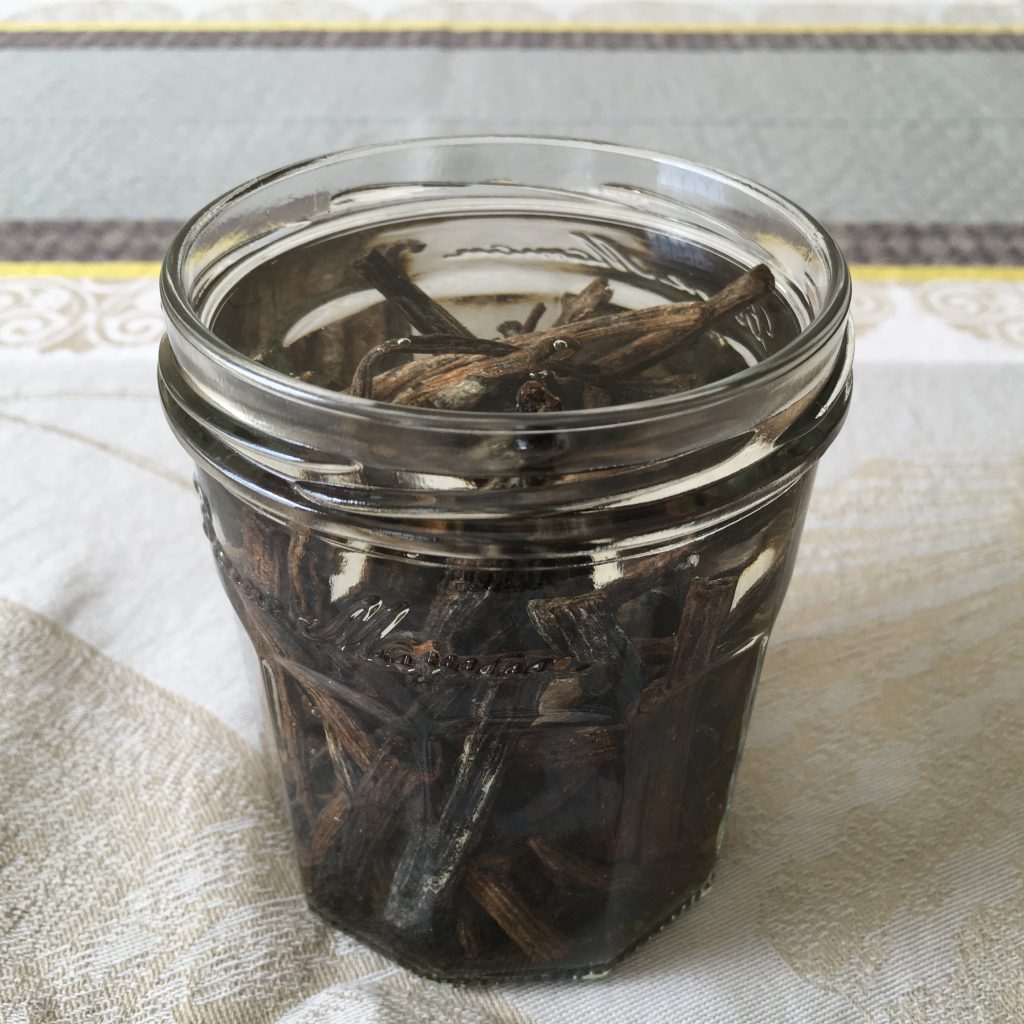 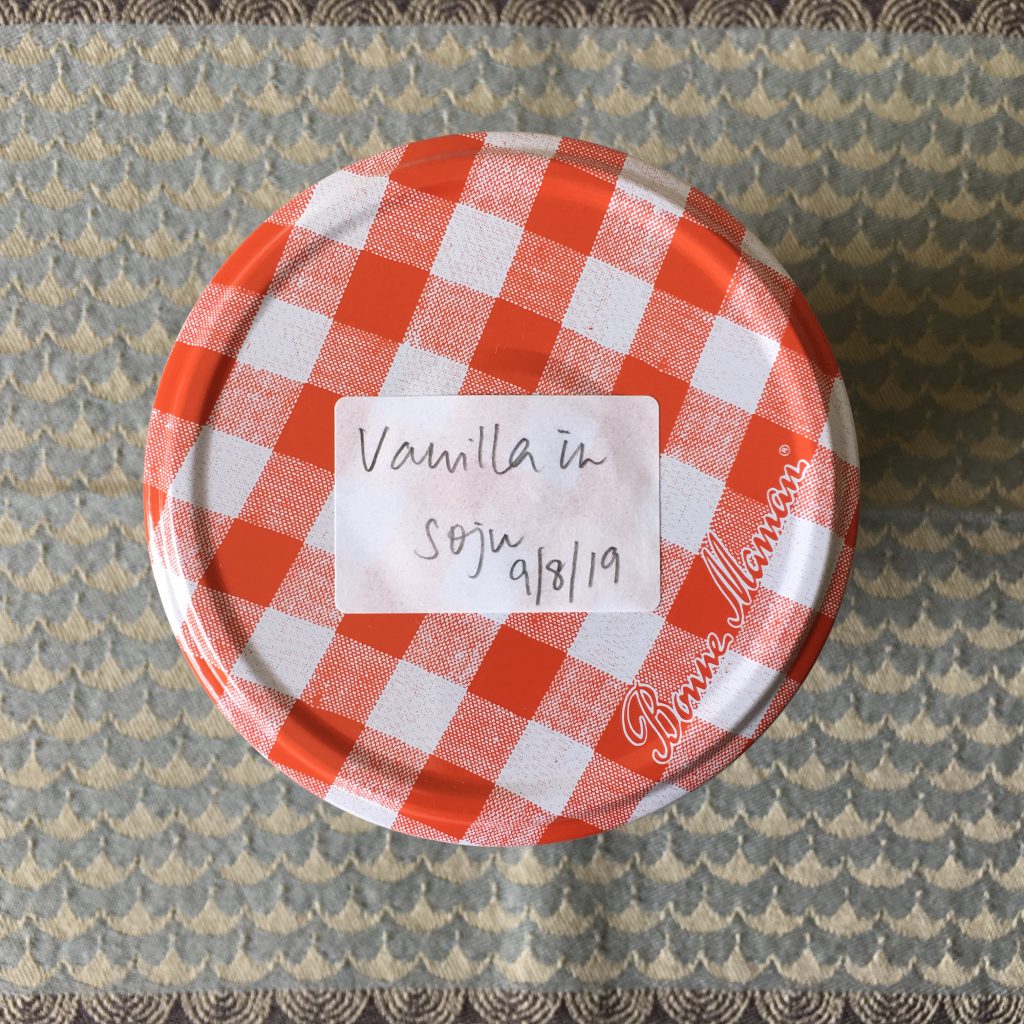