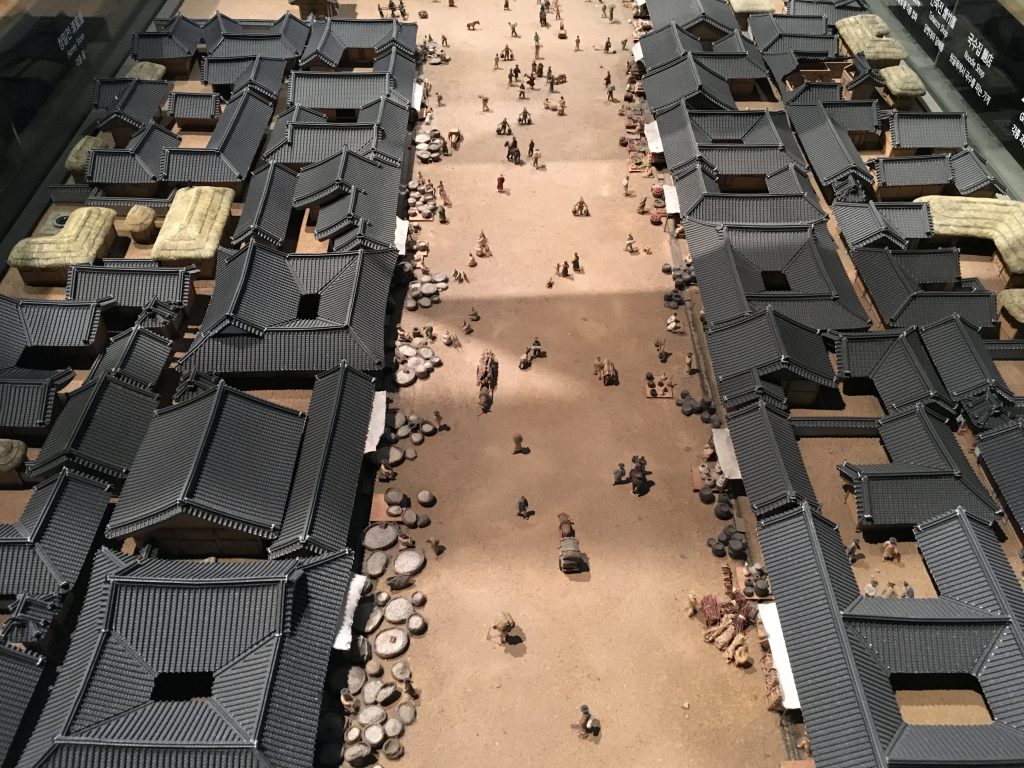 This seems like quite an ambitious post, taking in Korea’s history for the past 600 years. However, through visiting three superb museums in Seoul we managed to cover this time period. We know quite a bit of Korean history through reading and watching numerous dramas and films, and it was a delight to be able to piece together more information to fill some of the gaps in our understanding of Korea’s past. It was also very, very cold in Seoul so a trip to the museum was enticing not least for its respite from the bitter winds.

Each museum is listed below, with a short introduction followed by a few photos. There will be no long discussion of the exhibitions as the websites provide this information. When you visit, there are written guides in several languages. I picked up the English and Korean ones because I find this is useful for vocabulary and grammar practice, especially on short rides on the London Underground.

The first museum we visited was 국립고궁박물관 the National Palace Museum of Korea. This museum concerns itself with the history and culture of the Joseon Dynasty which lasted from 1392 to 1897. 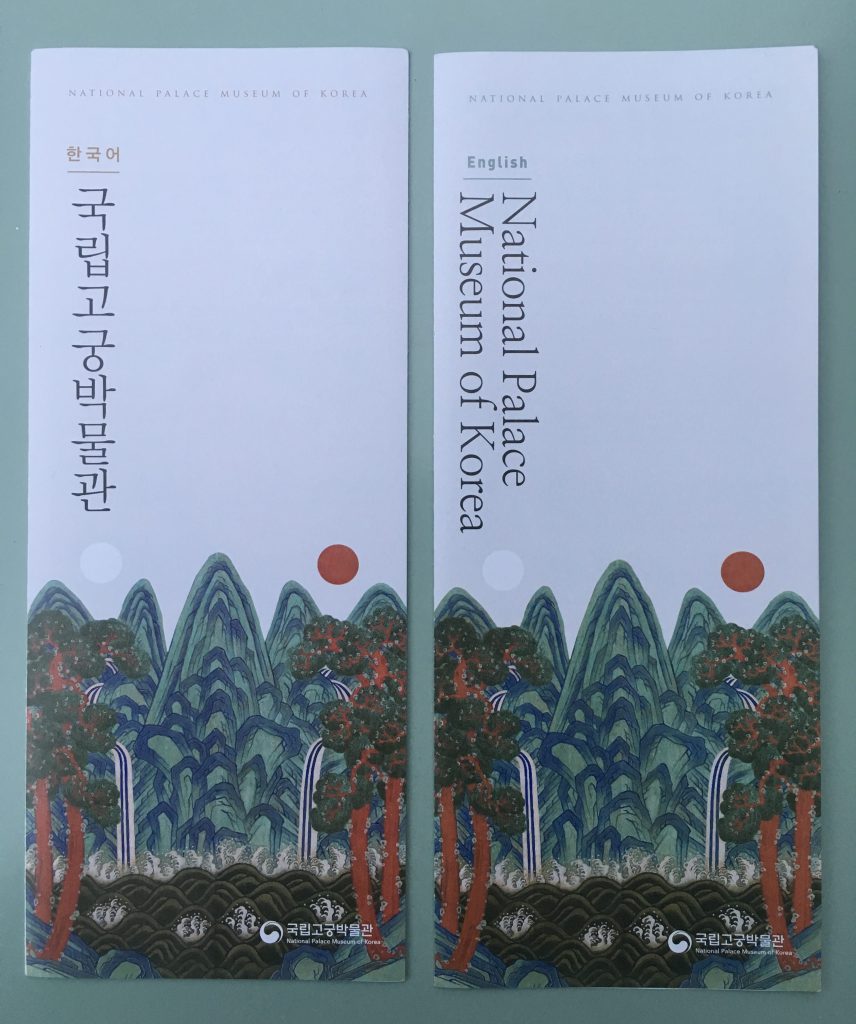 The permanent exhibitions are on the Kings of the Joseon Dynasty, the set up of the Royal Palaces and Life in the Royal Courts. I enjoyed reading about the kings as some of them have featured in the films and drama series I have watched. I particularly liked seeing the changes made to royal court life as time passed. One example was the contrast between the traditional table setting and the modern European table setting used after Korea opened up its shores to foreign powers.

Sura were the main meals of the day. Surasang, the king’s meal table, was “filled with refined cuisine cooked with the best ingredients presented to the court from the local regions. An entire meal was composed of a basic portion of rice and soup accompanied by 12 side dishes.” Below is a photo of daewonban which is the largest of the three tables used for the king’s meal. A smaller circular table sowonban was used by the court lady testing the food for poison. Another rectangular table chaeksangban was used by the court lady assisting the king throughout his meal. More on Korean royal court cuisine here. 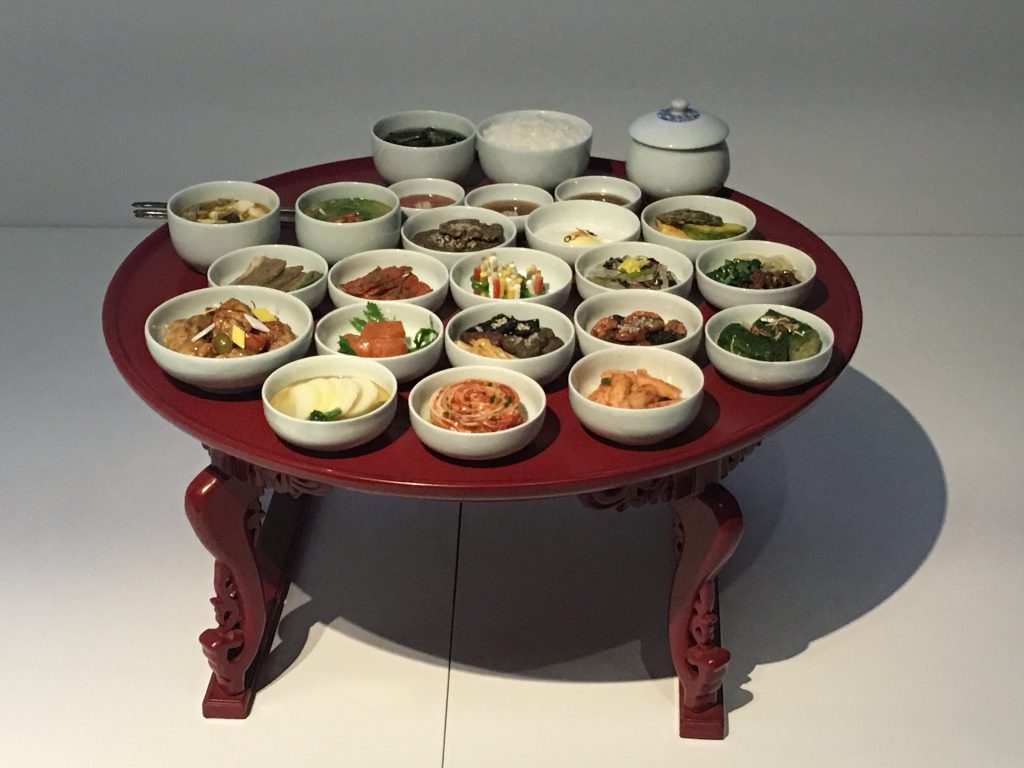 In October 1897 Emperor Gojong proclaimed the founding of 대한제국 the Great Korean Empire. Ports were opened up and all sorts of Western goods as well as technological improvements like electricity, railroads and parks were introduced. Imported ceramics from Europe were used in the palace of the Korean Empire, which was now Gyeongungung (present day Deoksugung). Below is a table setting of white porcelain from that period, decorated with a motif of the plum blossom which is the emblem of the Korean Empire. 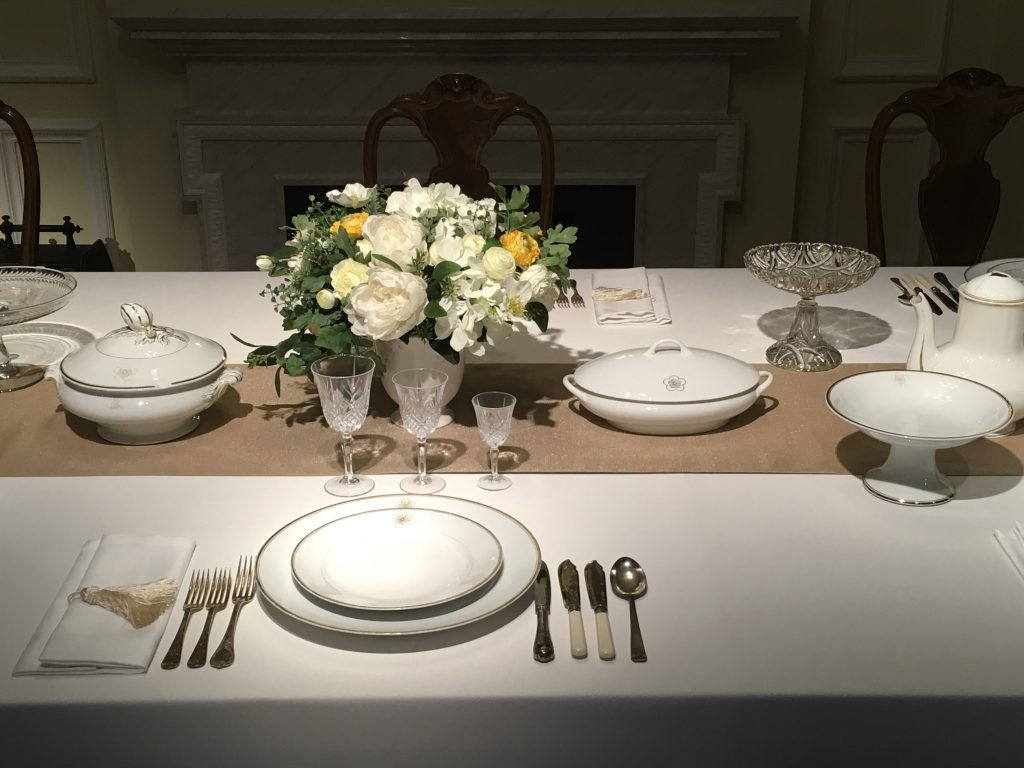 The second museum we visited was 서울역사박물관 Seoul Museum of History. This museum exhibits the history and culture of Seoul from the start of the Joseon Dynasty to the present day. 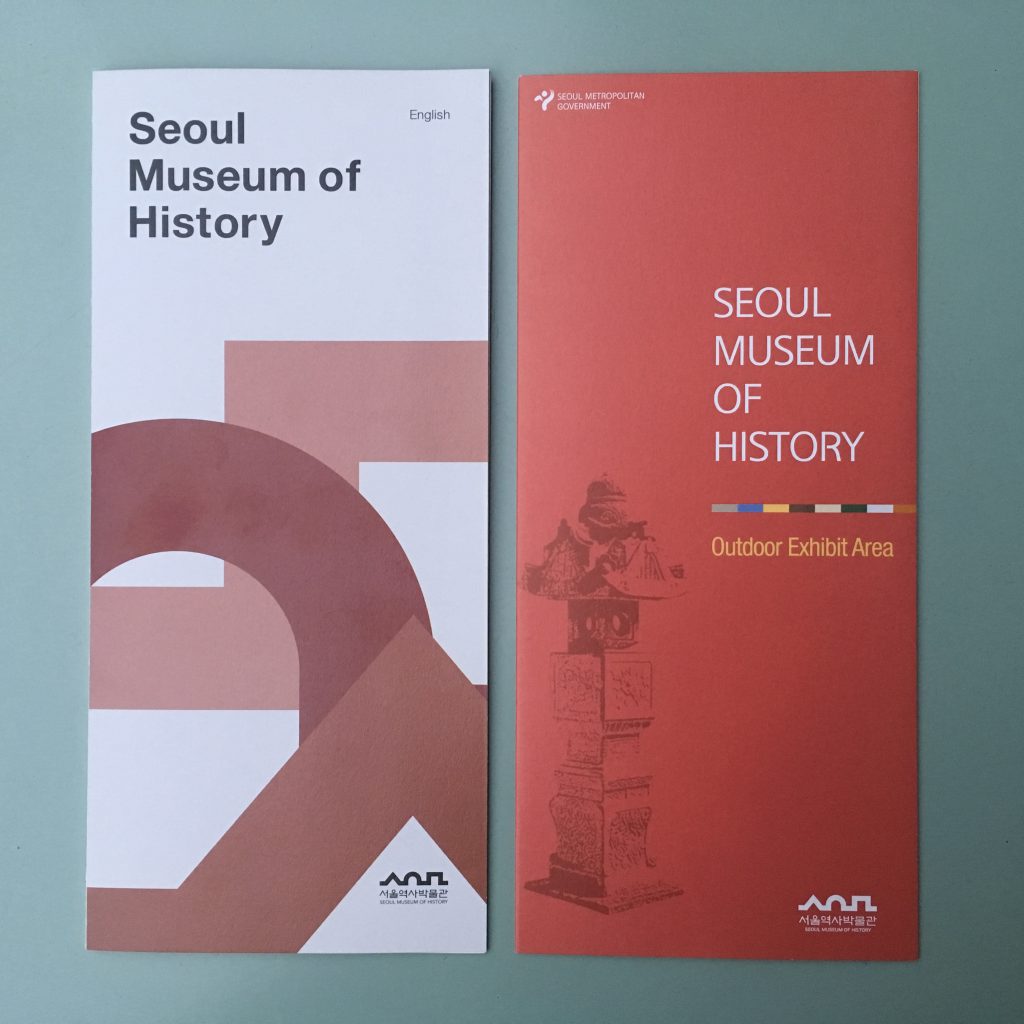 If you like maps, then visit the City Image Model Image Hall which has a miniature built up model of Seoul. It really is fun to work out where everything is in relation to each other. See the bigger picture, literally. 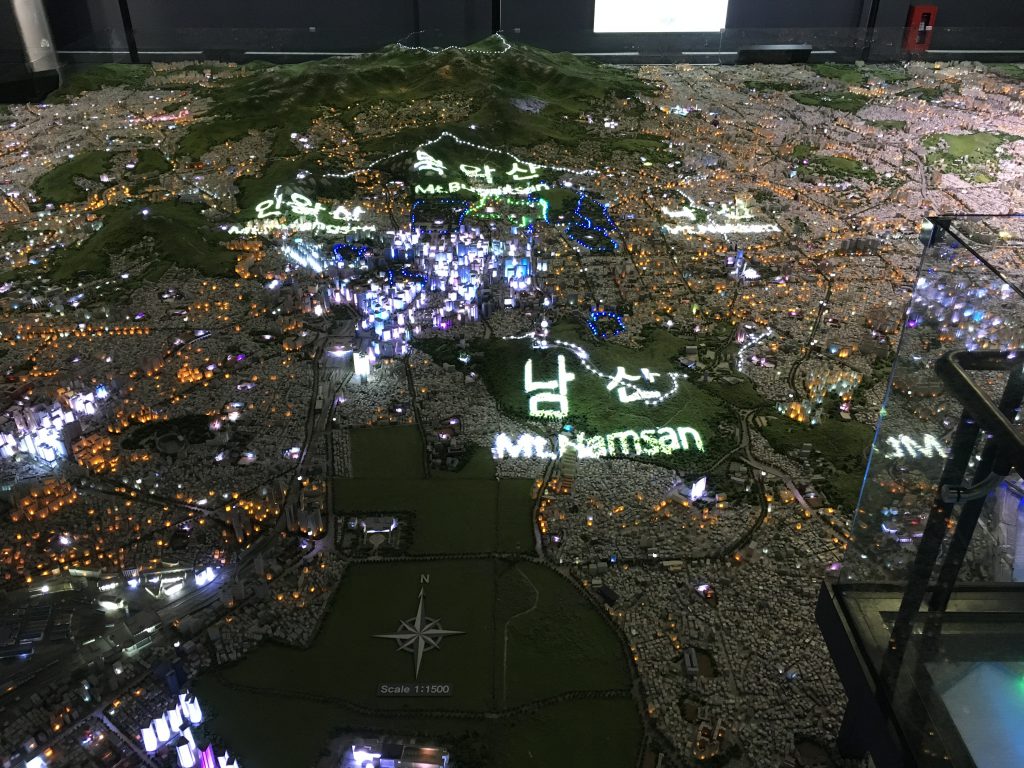 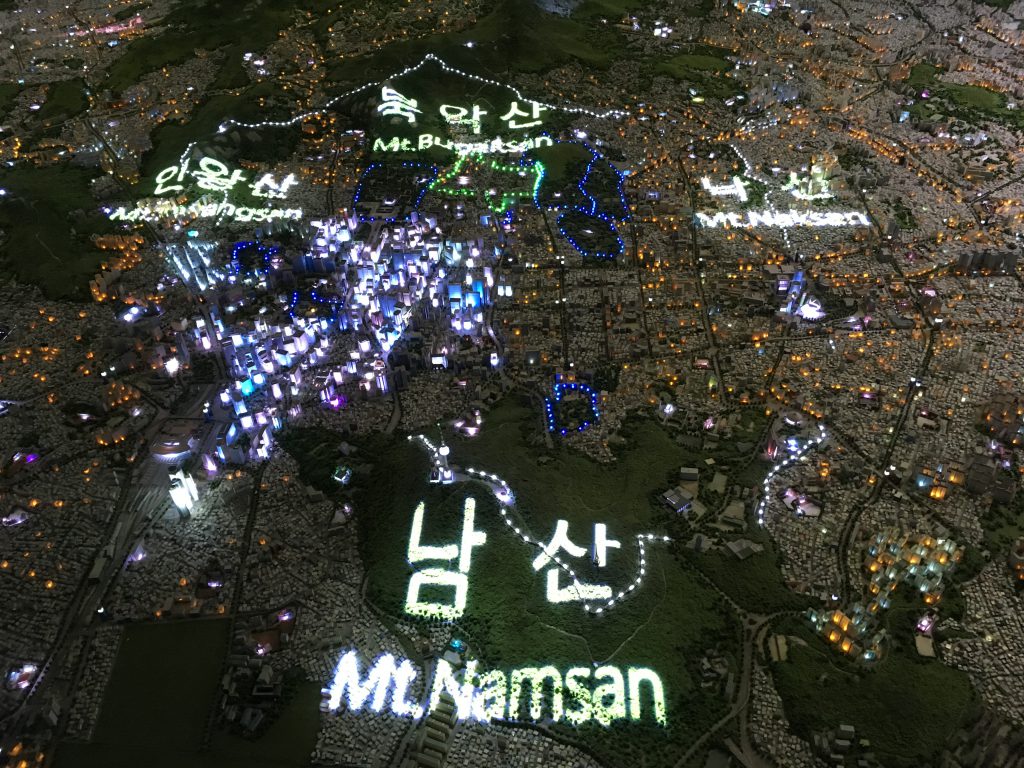 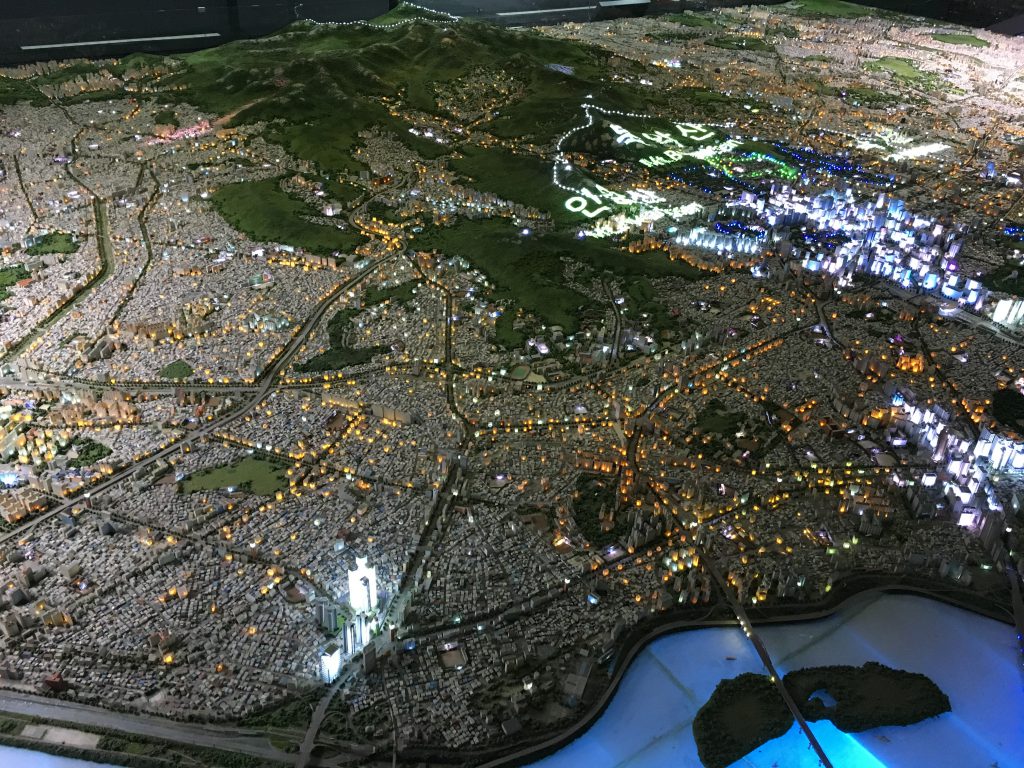 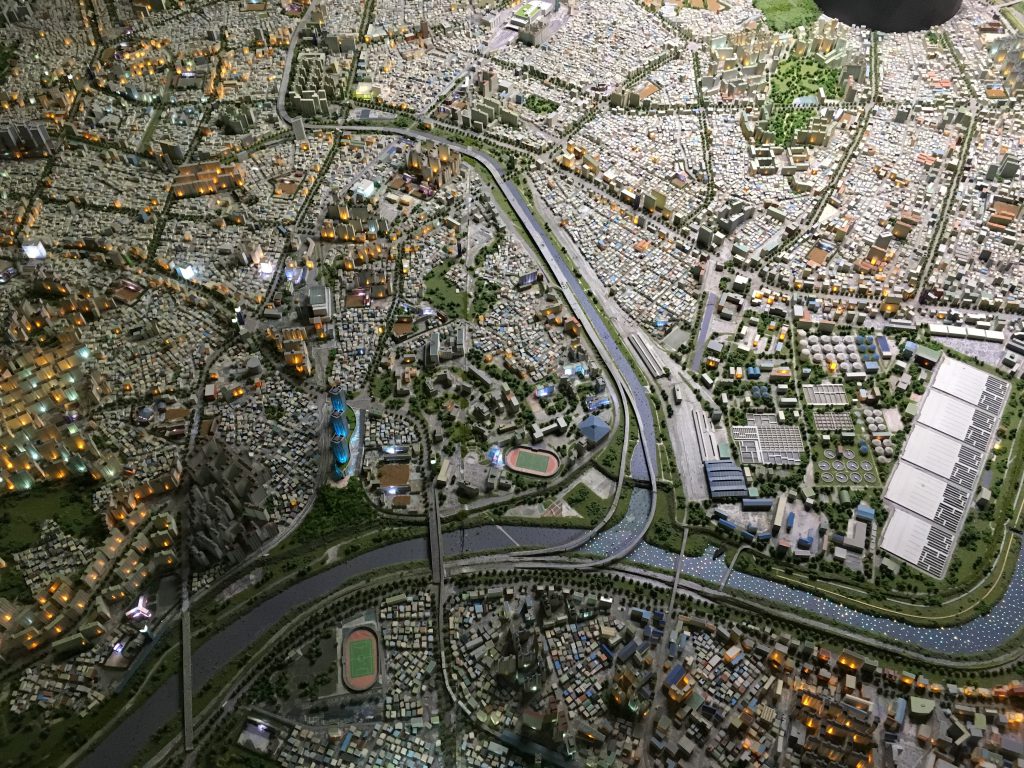 I would say that the entire experience at the museum was hugely educational, and I would happily visit again. One display that was engaging was a mini model of traditional shops that lined the main road leading to the King’s palace. All sorts of crafts and foods were hand-made in service to the court. 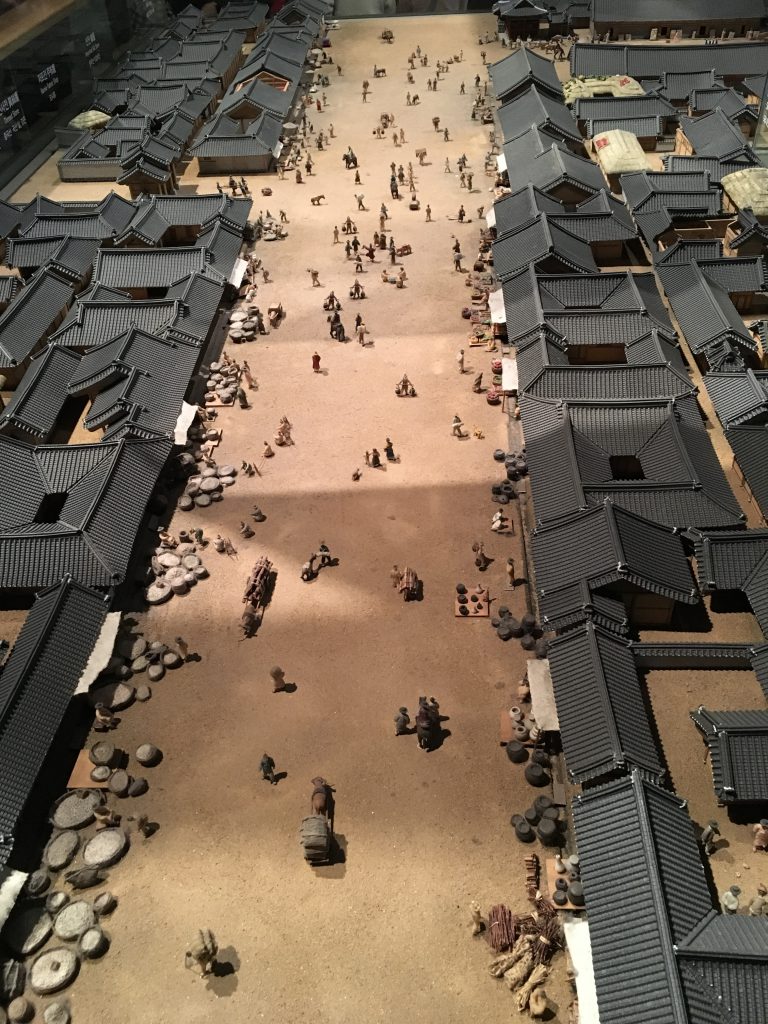 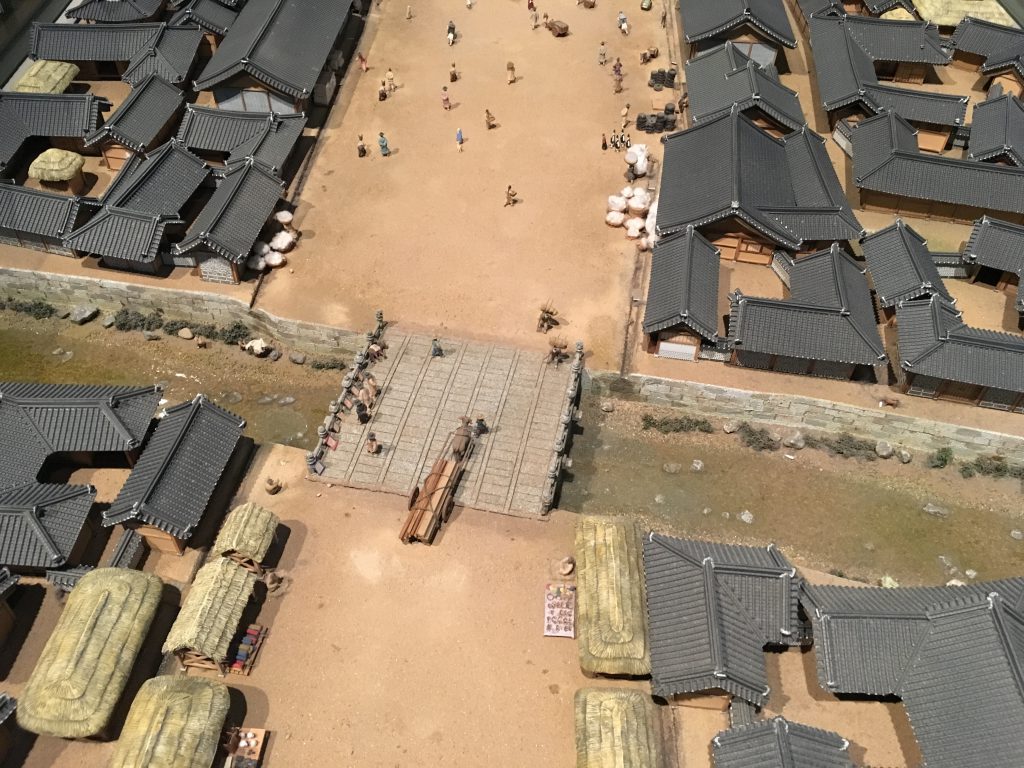 The final museum we visited on this trip was 대한민국역사박물관 the National Museum of Korean Contemporary History. I must admit I had a vested interest in this museum because its location is mid-way between our hotel and Terarosa Coffee. 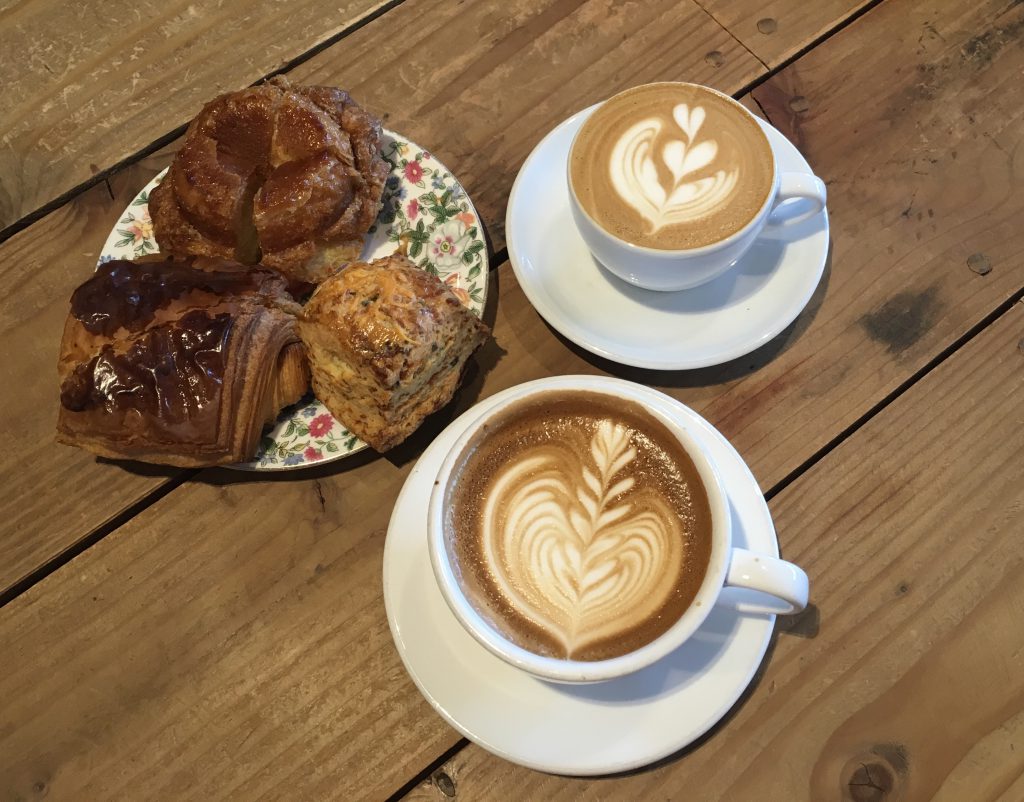 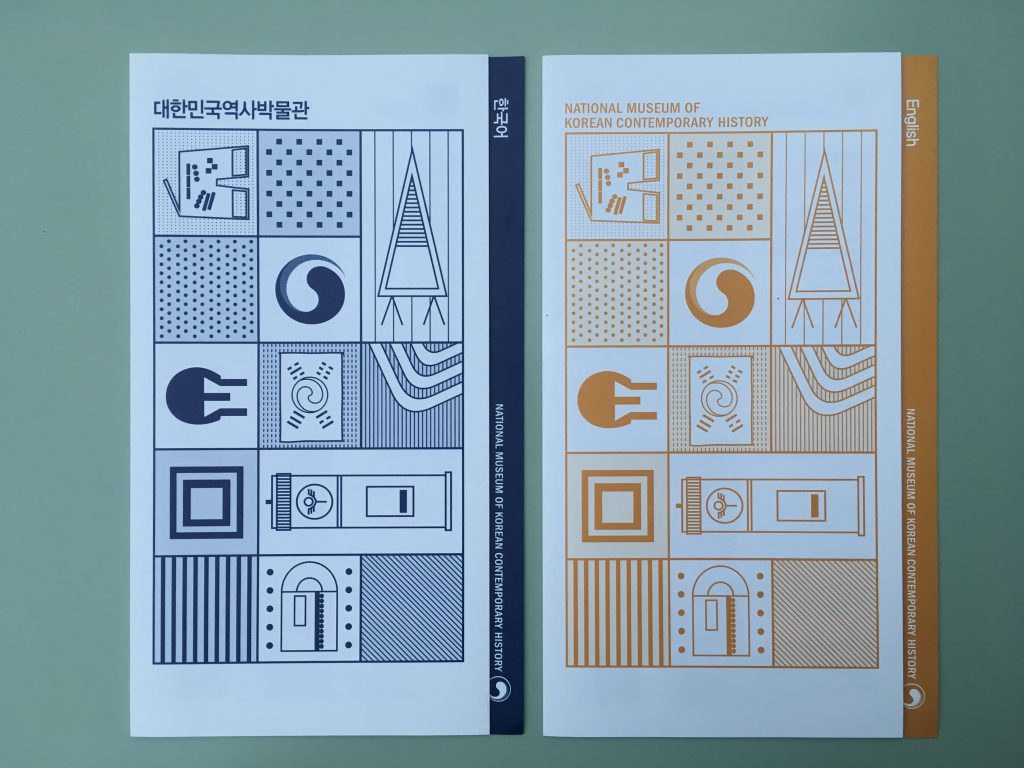 This is the view from the museum looking north towards Gyeongbokgung. There is some excavation going on and I am excited by what the dig will reveal. 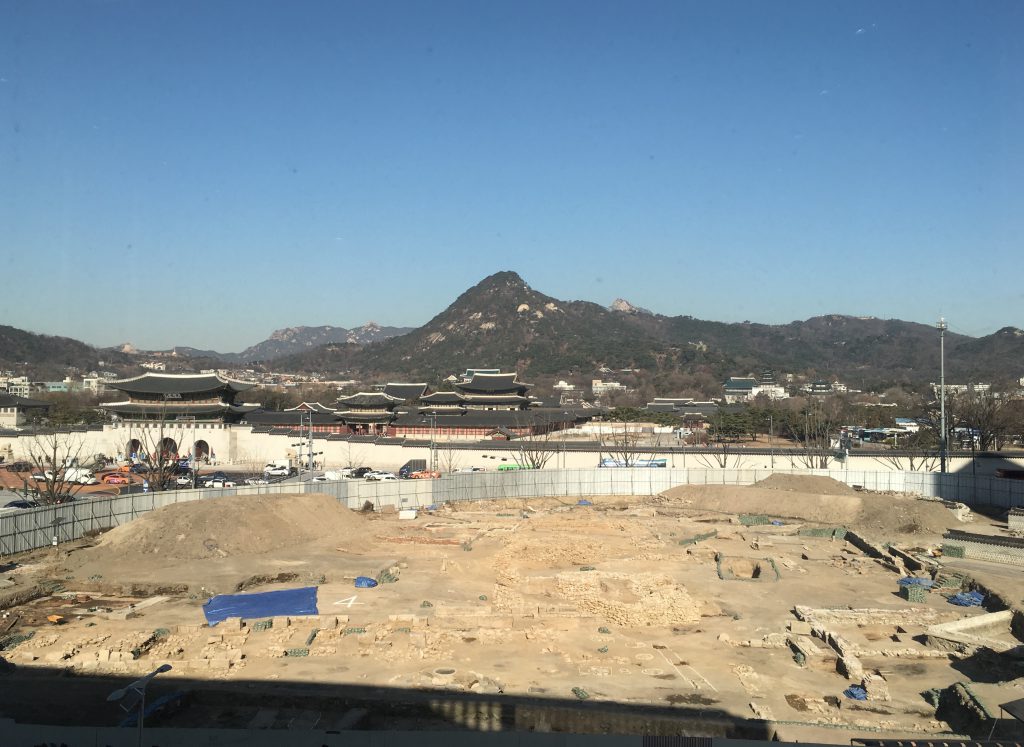 Despite some overlap of historical periods, each museum had its distinct feel and focus. I did not think there was any repetition and in fact, I thought the museums complemented each other very well. All three museums are free to enter and you should allow around two hours for each. There are many eating places around the area so you will not go hungry.

National Palace Museum of Korea, 12 Hyoja-ro, Jongno-gu, Seoul 03045. This is located to the left after your enter the main entrance of Gyeongbokgung Palace.

Seoul Museum of History, 55 Saemunan-ro, Sajik-dong, Jongno-gu, Seoul 03177. The easiest way to locate the museum is to find the Four Seasons Hotel Seoul, keep the hotel to your right and walk along the same road until you see the museum, which will also be on your right.

National Museum of Korean Contemporary History, 198 Sejong-daero, Jongno-gu, Seoul 03141. This is the big building across the road, on the corner to your right after the statue of Great King Sejong which is in the middle of Gwanghwamun Square.