Gochugaru Girl watched another 3 Korean Films on a near-empty flight from KL to Dubai. With no neighbours, this must count as one of my most enjoyable cinema experiences ever.

Once again, credit goes to Emirates Air for featuring such a wide choice of foreign films on its flights: the in-flight entertainment guide runs to 73 pages. Never mind anything else (great service, decent food, new aircraft, the very interesting Dubai Airport), this alone will make me a loyal customer. This film starts with a very charismatic Dr Lee Jang-hwan who addresses a hall full of university students: “There’s only one reason why I study stem cells – to give those with incurable diseases hope.” On another occasion, with three young boys in wheelchairs on stage with him, Dr Lee tells his supporters at a fund-raising evening: “This night is about these children who will soon get back on their feet…I will help them get back up!”

I had an idea this story was based on a recent scandal that enveloped South Korea, when a scientist claimed that he had successfully cloned human embryonic stem cells.

When Dr Lee’s claims are investigated, he convinces himself that he cannot take responsibility for perpetrating this scientific fraud: when he gave the public one miracle (a cloned dog called Molly) they wanted another miracle. Thus the media, public, scientific community and even the government have all contrived to put him in this position where, in order to bring hope to those with severe medical illnesses and glory to South Korea, he had no ability or reason to stop the lie in its tracks.

The acting in this film is superb. In Dr Lee I saw a craftsman at work: he came across as totally genuine about his research, motives and love of his country.  With a general election coming up in the UK soon, I shall remember this when the politicians come canvassing for my vote. 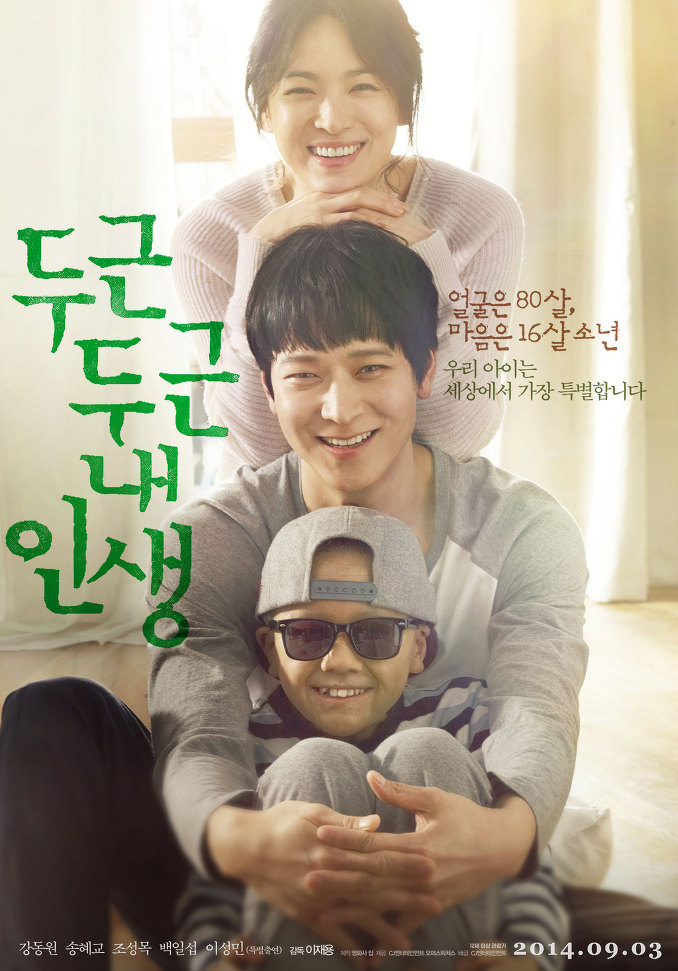 What would you do to have a pain-free and non-ageing body? I think it’s fair to say that no one likes the thought of growing old and eventually dying, although that is a certainty.

The boy in this story, Han Ah-reum, was born with the very rare genetic disorder Progeria. As the doctor in the film explains: “Although he is only 16, but physically he’s 80. Progeria patients age 10 times faster than normal people. Not only their skin, but bones and organs too. It’s an extremely rare disease that affects 1 in 30 million. Ageing can be delayed slightly but even with modern science there’s no way to stop ageing.”

Ah-reum knows his days are coming to an end so he’s writing a story for and about his parents.

I hesitated a bit before watching this film as I generally don’t like tear-jerkers. However this film is full of tenderness and humour. Poignant moments and funny scenes: it shows what taking responsibility as parents involves, at whatever age one starts being a parent.

This film is based on the 2011 novel My Palpitating Life by Kim Ae-ran. For non-Korean language readers, this is available in French* but not in English. Time to exercise the grey cells again? Maybe I need another long-haul flight and a good dictionary.

Film Number 3: No Tears for the Dead (우는 남자)

This is about taking a different kind of responsibility: Gon, a hired hit-man, kills a small child by accident and then is ordered to kill the child’s mother Mo-gyeong.

I am told that if you say you are from England (as a man visiting Korea) you will always get the response, “Ah…English gentleman”. After watching several Korean action films, it is evident that the violence in James Bond is mild by comparison. There was even one (The Divine Movie) which Mr Gochugaru banned me from watching.

Nevertheless, I wanted to watch this film: I knew that Gon would not kill Mo-gyeong, it was how he was going to prevent the other hit-men from killing her that intrigued me. At the heart of it, there is greed, greed and more greed. As the Bible says in 1 timothy 6 v 10, “For the love of money is a root of all kinds of evil.”

As you can imagine, there is blood, but the scenes are not so gory as to make you want to skip your dinner. There are also some very sad scenes when both Gon and Mo-gyeong reflect on their past, which reveal that their lives are not as dissimilar as it seems.

No Tears for the Dead