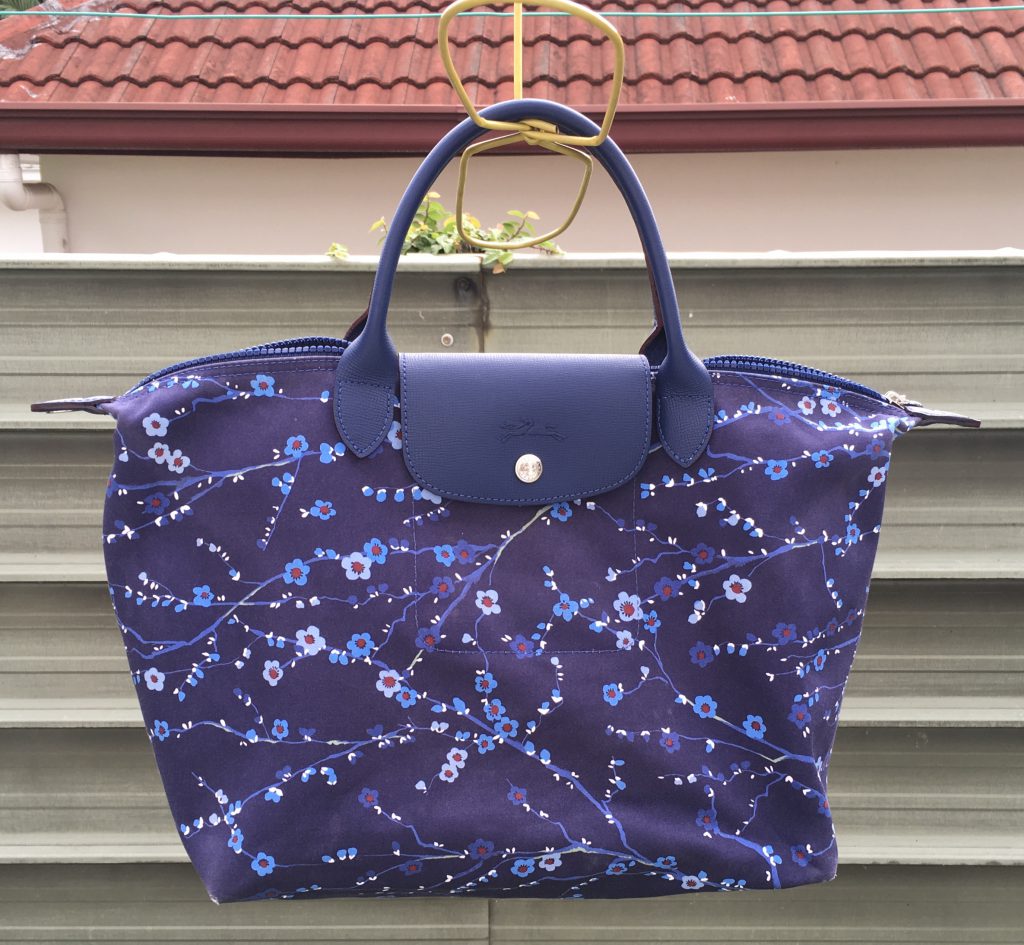 Time to say goodbye to the KL, where there is so much sunshine it takes only 2 hours to dry my bag after washing it.

After the drama of last night’s hospital visit KL Sister and I try to regain some composure and carry on with things. There’s packing and cooking and a bit of food shopping.

The maids fuss over what I need to bring back to London. My books, clothes and personal items weigh about nine kilos in total and the rest of the bags consists of things to eat or things that can be put into things to eat like organic screwpine leaves and lime leaves from the garden. The evening part-time maid doesn’t speak English and the permanent maid doesn’t speak Malay but nevertheless they manage to communicate when working in the kitchen helping to prepare the evening meal. Here they are posing with the precious leaves and a bowl of birds-eye chillis from our neighbour. 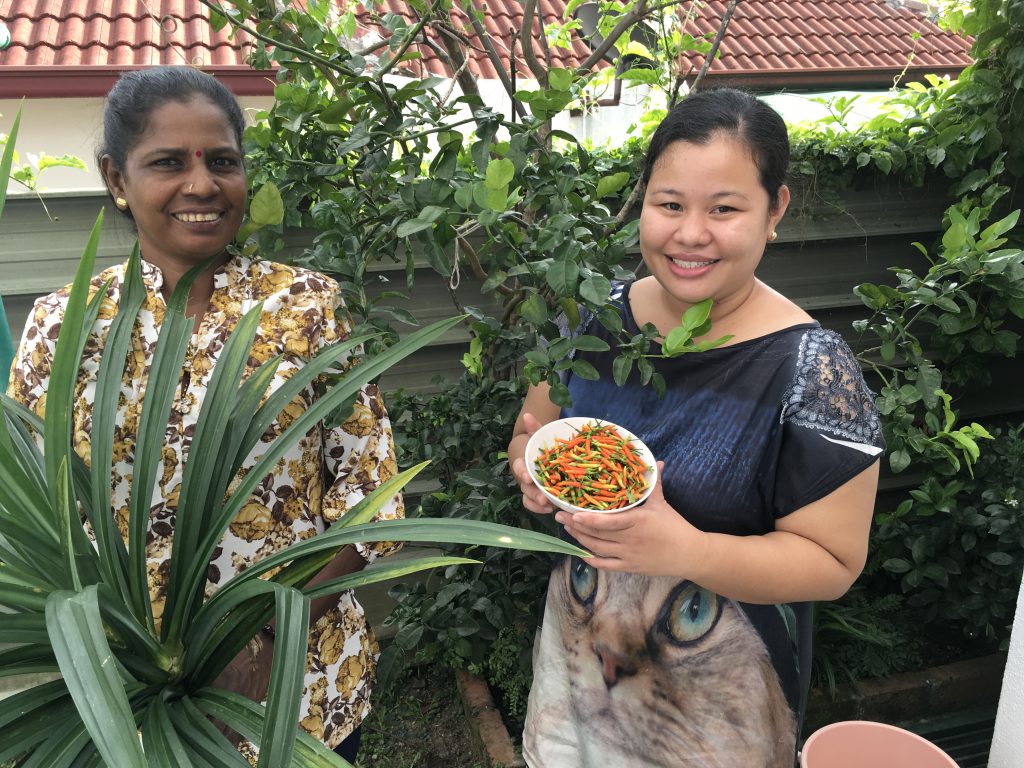 There’s curry paste to make chicken curry, raw peanuts and dried ikan bilis for frying and serving with nasi lemak, a box of moon cakes. There’s a certain brand of Japanese panko breadcrumbs which yields the crispiest results and which is difficult to find in London. Anything available in London (Japanese Bulldog sauce and Kewpie mayonnaise) has to be bought in London despite the much higher cost.

Then there’s 2 kilos of Cantonese char siu from Oversea Restaurant which my dad insisted I bring back because it is the best barbecued roast pork in the world. We would later have this for our Sunday lunch after ingeniously reheating it gently in a sous vide bag.

British Airways lets me check in two pieces of luggage with a weight limit of 32 kilos per piece. It means I can carry almost anything and not have to worry because I don’t carry very big bags. Filled to bursting, they only come to 23 kilos maximum and often they weigh in around the 18 kilos mark.

One thing I did not bring back were the passionfruit growing abundantly in the back garden, as there were not many ripe ones about. The few that I had were intensely flavourful and all the more precious for having been from our garden. 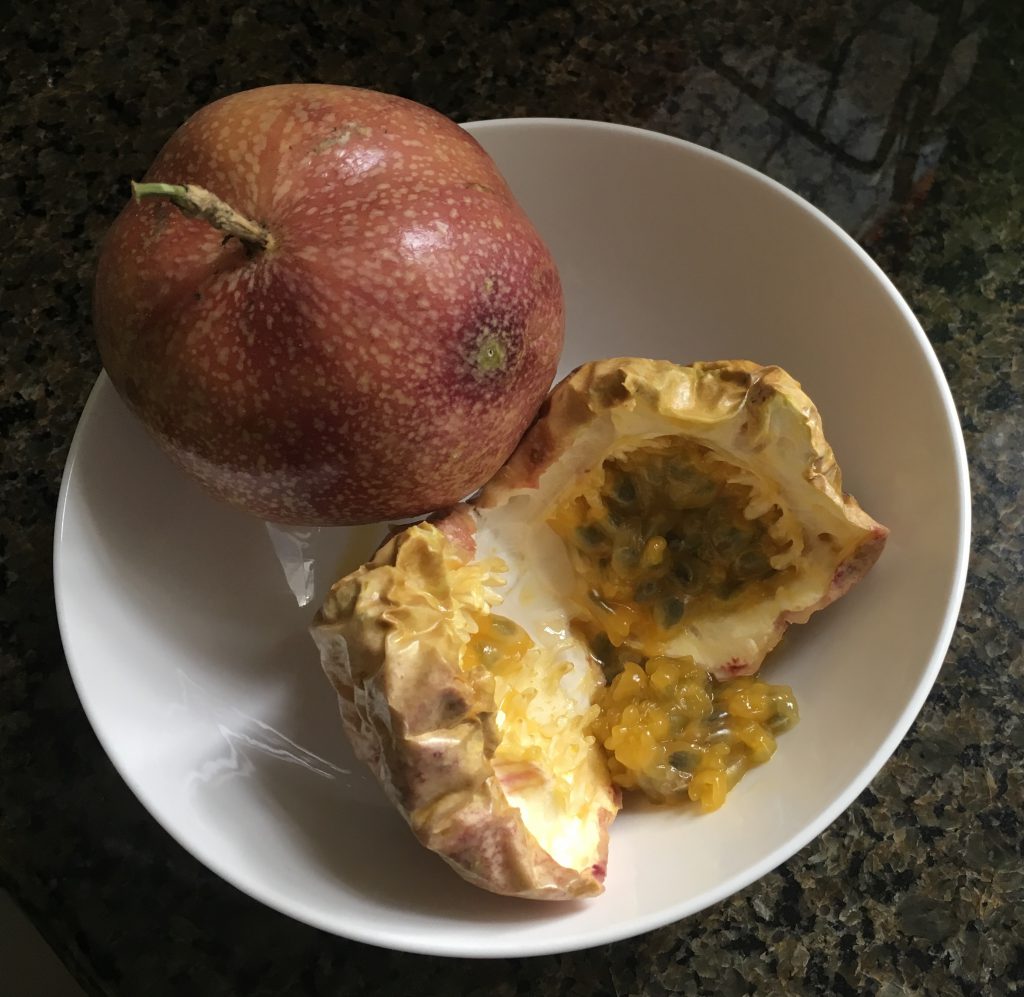 My mother says I am foolish to not buy a bigger suitcase but I explain that with a small townhouse where am I going to store such big suitcases? And more importantly, where are we going to store all the things we buy?

I am back to square one re clearing the paper from my dad’s study and I have decided to let go. I think his papers possibly represent the sum of his life and making him get rid of it is like eating into his soul. He won’t give anything up and in the meantime even more papers and books arrive daily. It will end like Charles Dickens’ Bleak House, with a large roomful of papers stacked from floor to ceiling but with no one knowing where the all-important document is.

Why do we love Greek myths? Because they give us choice phrases like Sisyphean task. From the Wikipedia entry: In Greek mythology Sisyphus or Sisyphos was the king of Ephyra (now known as Corinth). He was punished for his self-aggrandizing craftiness and deceitfulness by being forced to roll an immense boulder up a hill, only to watch it come back to hit him, repeating this action for eternity. Through the classical influence on modern culture, tasks that are both laborious and futile are therefore described as Sisyphean.

It’s time to stop and concentrate my efforts elsewhere.

One final point: KL Sister took Ginger the kitten to the vet and it turns out that Ginger is a girl cat, aged 2 – 3 months old. She behaved very well at the vets and didn’t make a fuss. Her latest plaything is a used toilet roll attached to some string. Like toys for children, there is no need to spend lots of money and all you need is some imagination.